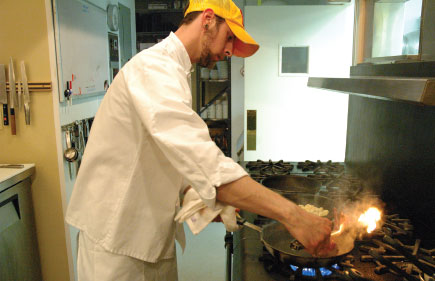 Brian Francois of the Whistling Swan.

The path to culinary excellence is unique to each traveler. Few kids grow up with chef’s coats in their dreams; and, thus for most, the choice of a career in the restaurant business comes late and unexpected. A whim, an inspiration, an accident, a crossroads.

Such is the case with three of Door County’s best chefs. The roads they’ve taken to running a kitchen prove that the creations offered at our best eateries are not merely the result of an entrée’s journey from kitchen to table, but the culmination of the chef’s own experiences, tastes and influences.

Terry Milligan already had a master’s degree in communications and was working as a professional fundraiser in Milwaukee when she came to a crossroads. While at that job, she studied cooking at the Postillion School of Culinary Arts in Fond Du Lac, which led to her starting her own catering company on the side. She was balancing the two careers when the urge to forge out on her own overcame the security blanket of a corporate career.

Shortly thereafter, Terry and her husband Chris bought Keneavy’s Kitchen in Sister Bay, sight unseen. There were doubts — and plenty of doubters — when they turned it into The Inn at Kristofer’s. These doubts were soon quieted as the eatery built a great reputation, almost immediately raising the bar for peninsula restaurants.

Milligan adds her personal touch to techniques she honed while under the tutelage of renowned chef Madame Kouny at the Postillion. Kristofer’s offers an appetizer and entrée feature nightly in addition to its ever-evolving menu, which changes every couple of weeks. Two dishes, however, are constant.

“The rack of lamb and the tuna are always on there,” Milligan said. “You could call those our signature dishes.” The menu descriptions alone alert your appetite to the presence of unusual fare.

The former is a rack of New Zealand lamb coated in honey mustard and roasted medium-rare, then served with a sauce of caramelized shallots deglazed in balsamic vinegar. The latter, Kristofer’s Spiced Encrusted Tuna, is Ahi tuna rolled in a variety of spices, then blackened and served on a citrus basil mayonnaise.

Evidence of the late Dr. Atkins’ influence is apparent on her menu as well, as both the Spiced Encrusted Tuna and the Filet Mignon are available in low-carb versions. “If you’re going to be successful in this business, you have to be flexible and fit your style to the customer’s wants,” Milligan said. “You have to be able to change with trends, and now we have a lot of customers looking for low-carb options.”

The challenge in any business is finding good help, but it’s especially challenging in Door County. Milligan credits a loyal, quality staff for allowing her to step back from the line and put more work into the many aspects of the business, which includes their cooking school, taught above Kristofer’s.

While Milligan creates in the heart of bustling Sister Bay, Chef Tom Smith prepares his eclectic fare at his own T. Ashwell’s just a few minutes north in the quaint village of Ellison Bay, which is possibly the county’s last reminder of quieter days.

In a county where success is often measured by location — defined simply as on the highway or off — Ashwell’s defies convention. Formerly the Griffin Inn, a bed and breakfast, Smith had good reason for choosing his locale.

“My mom really fell in love with it,” he said, adding that he “may have been doing a little bit of dreaming as well. But I looked at a lot of places, and I wanted a place that I could start from scratch and make my own, and it had what I was looking for.”

With a dining room as intimate as one is likely to find anywhere, someone looking to impress a date would be wise to start here. No seat is far from the prominent fireplace, and the atmosphere is so warm and comfortable that you may think you’re eating in your own living room.

Here Tom is a constant presence, making menu suggestions and giving descriptions to all who ask before darting back to the kitchen. While he appreciates his customers and the value of a chef’s appearance at the table, he longs for a little more time creating and less time describing.

“I’ve got a great staff that allows me to take care of other aspects of the restaurant, though I really enjoy cooking and wish I could do more.”

Tom creates his menu daily, though he says wholesale changes occur only every couple of weeks. Like Milligan’s, however, fans of Smith’s menu demand that certain specialties remain. The coconut shrimp and crab cake appetizers are standard, as is Smith’s Thai Quail, an Asian dish of two semi-boneless quail marinated in a spicy Thai marinade, char-grilled and served with fresh mango.

Smith earned his degree at the Kendall College Institute of Culinary Arts. After graduating, he split time between a French restaurant and construction before deciding that pounding nails was not for him. He came to the peninsula in 1994, where he honed his craft at the Sister Bay Café before breaking out on his own in 1998.

Ashwell’s quiet location, just off the beaten path, has resulted in at least one rather rewarding benefit. “When people walk in the door, you know it’s not by accident,” Smith said. “They’ve probably heard about us from a friend or relative, which means we’ve given that person a great experience.”

Smith and Milligan say they try not to worry too much about the competition, as they both feel they’re better off focusing on satisfying their own customers and keeping to their style.

Fine dining, however, has become an increasingly crowded field in Door County since Kristofer’s opened its doors ten years ago. This season the Whistling Swan enters the fray, determined to carve out a spot on Door County’s culinary landscape.

Chef Brian Francois is confident the newly remodeled restaurant — and his talent in the kitchen — will hold its own with his more entrenched competitors. Describing his style as “contemporary American,” Francois aims to utilize Door County purveyors and products as much as possible. The menu will change daily, featuring the freshest ingredients he can get his hands on, with much of his seafood coming straight from Hawaii.

“I try to keep it simple and not get too crazy with the flavors,” Francois said. “I try to let the ingredients speak for themselves.”

Though Francois has worked in kitchens since he was fifteen, he only found his inspiration to become a full-time chef after moving to Minnesota a few years ago. “I needed a job, and it was really the only thing I knew how to do,” he said. “Then I found the passion [for cooking], and that’s what it’s all about. I want everyone on my staff to have that passion.”

He finds the pace of the smaller restaurant a welcome change, adding that the staff “is not going to be pushing people in and out of here. We want them to take their time and give them the best dining experience possible.”

Whatever their previous careers or the callings that brought them to their kitchens, these Door County chefs infuse their culinary creations with their wealth of experience. In a way, their varied pasts reflect the eclectic nature of the peninsula and its many proprietors.