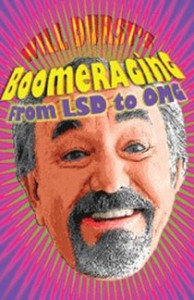 On Aug. 29 and 30 at 7:30 pm Boomeraging: From LSD To OMG will be on stage at Third Avenue Playhouse. This is Wisconsin native Will Durst’s acclaimed tribute to the history, growth, joys, achievements, frustrations, fashions and looming doom of the Baby Boom Generation. Ably assisted by his trusty overhead projector, Durst explores the Boomers’ revolutions, evolutions and still vibrant role in today’s youth-obsessed society, which they invented. It’s a celebration of the maturation of the Boomer Nation.

Due to the graphic nature and startlingly archaic technology, children under the age of 40 will not be admitted unless accompanied by a guardian or bring a note.

Durst is a five-time Emmy nominee; has been fired by PBS three times; told jokes in 14 countries; racked up seven nominations for Stand-Up of the Year; and has had 800-plus television appearances include Letterman, HBO, Showtime, CNN, ABC, CBS, NBC, Fox News, the BBC and many more.

There will be only five performances. Tickets are $22 general admission and $10 students ages 12 – 24. For more information and a performance schedule visit thirdavenueplayhouse.com.