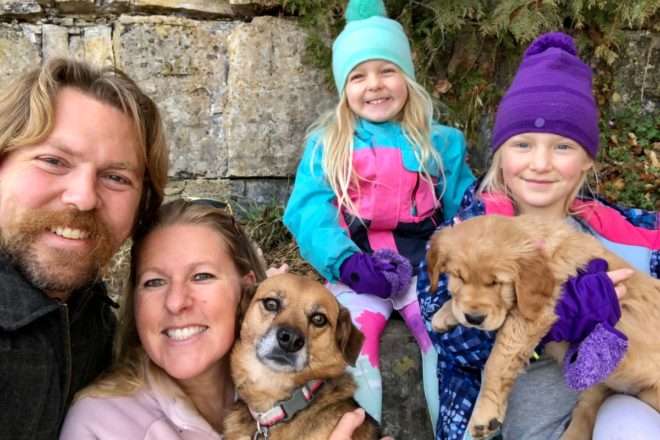 The Daytons, pictured here with daughters Piper and Ida, don’t regret for a moment the decision to uproot their lives in Colorado and make the leap to work, live and create art in Door County.

When Kari and Ryan Dayton lost their jobs within days of each other, they could have panicked. Instead, they seized an opportunity.

“Moving to Door County and having a glassblowing studio had always been part of Ryan’s dream retirement-plan goal,” said Kari, who grew up spending summers in Egg Harbor with her grandparents and later introduced Ryan to the area when they married.

So when the pair, who worked as geologists in the oil-and-gas industry, both lost their jobs three days apart, they decided to speed up a modified version of that plan.

“We looked at each other and said, for once in our lives, go anywhere and do anything we want,” Kari recalled.
They remembered a little log cabin on the west side of Highway 42, just before descending the hill into Fish Creek, that they had passed many times.

“We had driven by this place for so many years but always questioned what we could do with it,” Kari said.

At the time, Ryan had been glassblowing on and off on the side whenever and wherever he could for the previous eight years. Once they made the decision to purchase the building and the surrounding property in 2020, the business details seemed to take care of themselves.

“We realized we could build a studio back there,” she said, motioning to the area behind the circa-1860s log cabin, “and this building could become the retail area.”

And thus, Burnt Bluff Stone & Glass was born. Although shipping delays pushed back their grand-opening date toward the end of the season, the Daytons embraced the old adage of doing what they could, with what they had, where they were.

It didn’t take long to generate a buzz over Fish Creek’s newest art experience, happening at the little log cabin that had sat empty for so long.

“One of our main things is making glassblowing accessible to people,” Kari said. “That’s why we say if the garage door on the studio is up, he’s working, so stop by.”

And they mean it.

“There were plenty of times I had the garage door partially up,” Ryan said. “People would see feet walking around inside, so they’d poke their head in to see what was going on.”

From there, Ryan happily walks passersby through the process, explaining each step. First, he picks up a blowpipe and puts it into a furnace that contains glass. The glass inside has been heated to around 2,000 degrees F, making it malleable. As Ryan rolls the blowpipe around in the glass, he picks up what looks like a giant, clear blob of taffy.

From there, he rolls the molten glass on a metal slab called a marvel.

“This helps cool the glass,” he said. “Otherwise, it would just slide right off the end.”

The marvel also helps Ryan to control the shape of the glass. When the glass becomes too cool to shape, he moves it from the marvel to the “glory hole”: a hot chamber that reheats the glass, making it malleable once again.

To add color, he adds crushed colored glass to the molten glass during this phase.

“Since we’re making a rose, I’m going to add some red,” Ryan said as he rolled the end of the blowpipe containing the molten glass into a colorful, crystal-like powder reminiscent of Pop Rocks candy before adding additional clear glass over it.

He moved through the process like a dance, melting and shaping and turning the glass until a single stemmed red rose appeared.

“The most challenging and fun thing about glassblowing are the same thing,” Ryan said. “There’s a challenge in working with this medium. When the glass is that hot, it doesn’t hold a form, so you have to become familiar with how that heat flows and the balance involved in shaping it.”

Moving forward, the Daytons, who live in Gibraltar with daughters Piper and Ida, plan to keep the gallery open year-round and host classes and workshops, as well as additional demonstrations.

“Being year-round will allow us to have glassblowing demonstrations almost every single day if we want,” Kari said – a decision that stemmed from the lack of such opportunities that Ryan encountered when he started.

“We want to make glassblowing accessible,” Ryan said. “It’s amazing how much you can do with little to no experience when you have some help.”

In addition to classes and workshops, the two geologists-turned-artist-and-gallery-owner have plans to add more stoneware and stone art into their work. Most of what they currently create and sell at their gallery is inspired by Door County and its geology and landscape. And although there is some overlap between Ryan’s work as a geologist and glassblowing at the basic level of understanding heat flow and the science behind the process, it is really the Daytons’ love for Door County that inspires the work, from blown-glass roses and miniature trees (a hit at the inaugural Christkindlmarkt in Sister Bay) to stone succulent planters and candle holders.

“A lot of the stuff we create is inspired by Door County – the bluffs and the Niagara Escarpment  – because that’s why we’re here,” Ryan said. “We love it here, and we want what we do here to reflect that.”