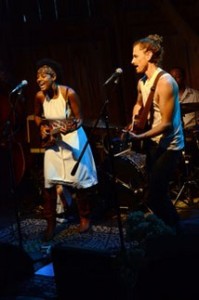 On July 2, Birds of Chicago will play at Bier Zot in Sister Bay in a show for all ages at 7 pm.

Birds of Chicago (BOC) return to the road (and Door County), fresh from the studio with Grammy Award-winning producer Joe Henry. The band just concluded a Kickstarter campaign that raised more than $80,000 in fan commitments (from more than 1,000 investors) for this exciting new project.

BOC is currently supporting Live From SPACE, a live album that made the 2014 Best-Of lists at Americana UK, London Telegraph, Blabber ‘n’ Smoke, and Tin Can Review.

2014 could have been considered a big year for Birds of Chicago, based on the release of Live From SPACE alone. Other highlights included touring with the Carolina Chocolate Drops, signing with Concerted Efforts booking agency, and being selected to the Cayamo Cruise alongside artists like Richard Thompson and Lucinda Williams. Expect the Joe Henry-produced album this fall.