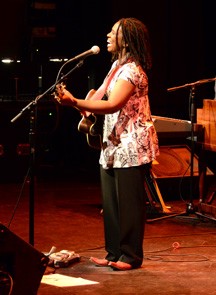 Ruthie Foster could sing me her grocery list and I’d be completely mesmerized by the resounding warmth in her voice. She could sing me a lullaby, a southern blues tune, or reggae hit – so long as she sang.

She captivated the audience at Door Community Auditorium (DCA) last year with her wide smile, easy grace and striking range: beautiful belted notes, a rugged curve as she gears up with a rock song, or a soft smoothness in her quieter, more melodic tunes. And she’ll be back Nov. 24, performing at 7 pm.

My boyfriend and I bought two of her CDs almost immediately: The Truth According to Ruthie Foster, where she incorporates soul, classic R&B, folk, blues and bubbling reggae, and The Phenomenal Ruthie Foster.

For two people with widely different musical tastes, we consistently agree on Ruthie Foster. That’s largely because of her ability to jump from one musical genre to another, and to blend them together. She’s been compared to legends like Ella Fitzgerald and Aretha Franklin for her mesmerizing, soul-drenched voice and shining stage presence.

All her music has at least a hint of gospel, but her influences include the Beatles, Tina Turner and Muddy Waters. Additionally, she grew up listening to “Old Soul,” music – an East Texas and Louisiana mesh of sound that can be heard in Z.Z. Hill’s music.

Her live performances are full of a wide range of her own songs and covers of her favorite artists and biggest inspirations.

During last year’s performance, she bantered with the audience, and inside the intimate space of the DCA she shared childhood memories. Not only that, but she had the whole audience on their feet a number of times – most memorably for the song, “Phenomenal Woman,” off the 2006 album, Phenomenal Ruthie Foster. The lyrics, originally a poem by Maya Angelou, are extraordinary, and when coupled with Foster’s stunning voice, this powerful song hits the heart like a bull’s eye, and earned Foster a standing ovation:

Now you understand just why my head’s not bowed.

I don’t shout or jump about or have to talk real loud.

When you see me passin’, it oughta make you proud.

The palm of my hand, the need for my care.”

‘Cause I’m a woman – phenomenal woman.

Her music was full of movement, and throughout the night people swayed in their seats and clapped their hands, perhaps voiced a, “You go girl,” or “You’re preachin’ to the choir.”

Grammy nominated in 2009 for Best Contemporary Blues Album and awarded the Traditional Blues Female Artist of the year in 2010, she captures the essence of a seemingly infinite variety of music. Foster is rocking the music world, and all genres are feeling her presence and force. She’s received rave reviews from The Austin Chronicle and O, Oprah Magazine, as well as Blues Revue.

When Foster takes the stage this November she’ll have new material – a recently released album, Let It Burn, featuring two new original tracks in addition to songs by Adele, The Black Keys, Johnny Cash and Los Lobos reinvented by Foster (her ability to “add a little Ruthie” to every song she covers always astounds and entertains).

Don’t miss the amazing opportunity to see this truly phenomenal woman come back to the DCA’s stage.