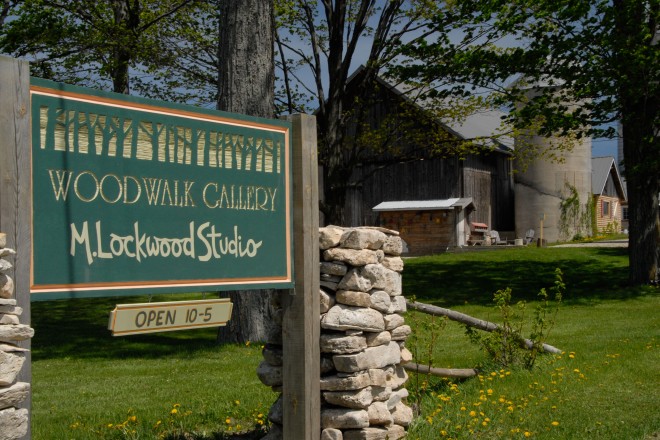 A stand of trees glowing in the sunrise. A bank of clouds illuminated by the evening’s final rays of light. Artists have always been transfixed by the beautiful landscapes of Door County. The natural world has long been one of the primary inspirations of visual artists. But perhaps no artist has put as much effort into putting you inside the natural world as Margaret Lockwood. Her large-scale oil-on-canvas paintings draw viewers in, placing them within the landscape itself, at the very time of day Margaret portrays. Her contemporary paintings weave color, space and light together into a tapestry that captures a time and place in her layers of paint and layers of meaning.

I first noticed the work of Margaret Lockwood only a few years ago, in an exhibition at Mr. Helsinki restaurant in Fish Creek. I found myself drawn in, staring at her paintings, becoming more and more interested as the works of art seemed to change as the light changed from late afternoon to dusk to night. (This was, of course, probably not the most prudent way to spend my time, since I was employed as a waitress at the time!) But after speaking with Margaret I discovered that I was far from the first person to lose myself “walking inside” a Lockwood.

Door County art aficionados have been appreciating the art of Margaret Lockwood for many years, but she came into local prominence in 1994 when she opened her Woodwalk Gallery in an old renovated schoolhouse in Juddville, and became a full-time studio artist and gallery director. Since then, collectors have sought to acquire their very own Lockwood, some going so far as to design rooms in their homes for them. As Margaret’s following grew, so did her desire to grow into a new space – her new home and gallery on County Road G in Egg Harbor.

On a sunny spring afternoon, Margaret and her husband Allin Walker invite me to visit their 10-acre farm between Egg Harbor and Carlsville. As I tour the property with Margaret and Allin, they enthusiastically describe to me all the uses the new Woodwalk will have in addition to gallery space. The converted barn will house a performance space, Woodwalk Gallery, and Margaret’s straw-bale construction studio. Woodwalk will also be home to Theatre M, the theatre company of Mark Moede and Mary White, which showcases works at the intersection of politics, religion, and theatre. And then there is the Door County Men’s Center (for men AND women, Margaret is quick to add) which provides a co-op workshop space in a large Quonset hut for people who do not have their own workshops.

During my visit, we spend the most time in the studio, where the room itself is almost as much a work of art as the paintings within it. The smooth white walls give way to an enormous picture window framing the beautiful meadows and trees beyond. As Margaret shows me her new paintings, I can understand why her art has been described as ethereal, atmospheric, and spiritual. But more than anything, I am struck by the size of her paintings and the way they draw your eye into them. “I paint big, because in a way, it is more intimate,” Margaret explains. “It puts you in the painting.”

The use of light and color is especially important to Margaret’s art, particularly in her new collection of 22 works created over this past winter. She describes her new surroundings as inspiration. “This season I am very excited about telling a story with the colors, the layers of color that change and evolve as time progresses. I especially like painting scenes set early in the morning or late at night. I strive to capture a time of day,” she says.

So it is fitting that Margaret has chosen a beautifully restored 1890s barn set amidst open fields dotted with trees as a place to work. The project of turning this historic farm into the new Woodwalk has been a labor of love, with a dedicated team of artisans and laborers reclaiming the barn and its outbuildings and giving them new purpose. With the help of several of Door County’s most talented musicians, potters, sculptors, and actors – like Dave Giesel, Erik Frost, Mark Moede, Matt Stender, Jay Whitney, and Rich Higdon – Margaret and Allin have work tirelessly to reinvent the property. And, in doing so, the end result is one that incorporates the collective talents of all those involved.

Just as we finish the tour, a spring downpour arrives and we head inside to escape the rain. It is a perfect opportunity to talk with Margaret about how her varied professional life has evolved through many stages over the years. She started her career with a degree in social work, and then had a family and became a stay-at-home mom. Her artistic career began in the art of weaving, where she learned about weaving on a 60-inch loom and created large-scale tapestries. From there, she became interested in painting and began taking classes, eventually earning an MFA in painting from Fontbonne University in St. Louis, Missouri.

As anyone who has taken a painting class can tell you, one of the most common teaching techniques is asking students to paint a still life, often a scene of objects sitting on a table. “I was in an art class painting a still life composed of a bowl of fruit on a table,” Margaret recalls, “and I found myself more interested in the underside of the table rather than what was on top of it. I focused in on the table legs, and the more I looked at them, the table legs became trees, and I wanted to crawl under that table. To be nestled in the trees. From there, I knew I wanted to paint woodland scenes, inviting people into a natural space that drew you in and made you comfortable and safe, underneath that table, so to speak.”

As a former weaver, she carried the textural element of weaving with her into her painting career. Her unique style emerged as a tapestry of color and light, weaving the elements of nature into highly affecting works of art. “My work is a response to the fragile beauty of trees and the peacefulness of fleeting light and color across the fields and in the clouds above,” Margaret says. “I want to make visible the mysterious atmosphere of landscapes and spaces within us, our spiritual homes.”

The spring shower clears, and the sky turns blue again. It is an afternoon Margaret seemed to order specifically to highlight the beauty of her new creative home, and the natural world that inspires her.