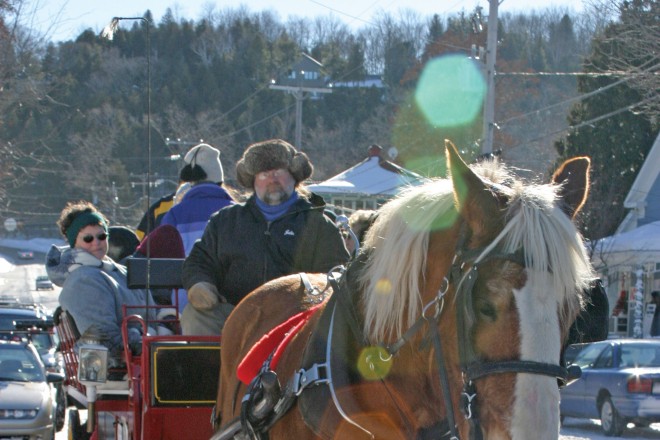 Horse and carriage escorts guests from one inn to another.

Tucked in amongst the fish boils, supper clubs and brat fries that are the typical dinner fare in Northeast Wisconsin are numerous opportunities for adventurous and educated palates to do some pretty serious eating. For four weekends in December and January, the quiet Door County town of Fish Creek is transformed into the center of fine dining and conviviality for the entire region.

For the past eight years, three of the historic inns of Fish Creek have banded together to prepare and present a culinary adventure known as the Progressive Dinner Weekend. Originally began as a way to help fill rooms for a weekend during a slower time of the year, the Progressive Dinner has transformed into a winter destination unto itself, with dedicated epicures returning year after year for a weekend of tasteful delights.

Each inn offers special Progressive Dinner Weekend packages, culminating Saturday evening in a five-course dinner, complete-with live music, as guests tour the inns, each festively decorated for the season. The Historic Inns of Fish Creek describe the Progressive Dinner as “a moveable feast .” The gourmet dinner begins at one of Fish Creek’s historic inns, moves to another for the main course and then on to a third for dessert.

The idea for the first Fish Creek Progressive Dinner came from the owner of the White Gull Inn. “Almost 10 years ago now, it occurred to me that the businesses and inns of Fish Creek were decorating for the holidays, but the winter tourist season began the day after Christmas,” said Andy Coulson, innkeeper of the White Gull. “I wanted to draw people up here earlier. I attended an innkeepers meeting which involved food and live music and I thought about putting together a reason for people to come to Fish Creek. I contacted the other historic inns and together we created a holiday dinner.”

“We decided to do it one weekend in December and ended up with a very good turn out,” said Coulson, modestly. The first dinner was such a success that guests immediately wanted to know when the next dinner would be scheduled.

The Progressive Dinner begins with hors d’oeuvres at the charming Thorp House Inn, built in 1902 by Freeman Thorp, a member of Fish Creek’s founding family. Following Freeman’s death in 1903, the house served as tourist lodging for more than 80 years before being restored and converted into a bed and breakfast by current owner/innkeepers Chris The Whistling Swan hosts the dessert course followed by caroling and Sverre Falck-Pedersen in 1986.

Chris Falck-Pedersen says guests typically have about 15 different bite-sized appetizers to choose from, including prawns, little brochettes of barbequed meats and various stuffed pastries . “One standout has been the tuna Niçoise, made with a slice of new potato and a chunk of marinated, grilled tuna with Niçoise sauce, topped with capers and fresh herbs,” said Falck-Pedersen. “Another favorite has been a palate cleanser made of a nest of meringue, filled with piped lemon cream and topped with fresh strawberries and mint.”

Following the appetizers at Thorp House, dinner guests are transported to the White Gull Inn by horse-drawn wagons, past the many homes and businesses decorated for the holidays. Although the distance between the inns is certainly walkable, the horse-drawn wagon only adds to the charm of the weekend. “You can hear people singing and caroling as they clip-clop through Fish Creek,” says Coulson.

The 104-year-old White Gull, founded by Dr. Herman Welcker, is the oldest continuously operating inn in Door County. Innkeepers Andy and Jan Coulson and their staff conduct tours and discuss the inn’s history before serving soup, salad and the main course.

Coulson and the kitchen staff of the White Gull work hard to create a special holiday-themed menu, trying to use as much Wisconsin produce as possible. For last year’s Progressive Dinner, the White Gull served a cream of butternut squash and cranberry soup, roast loin of pork stuffed with apricots and glazed with a Vouvray wine sauce accompanied by wild rice pilaf with wild mushrooms and sherry-mapled Brussels sprouts. The dinner ended with a salad of winter greens with pear, pomegranate seeds and toasted hazelnuts tossed in a Champagne vinaigrette.

Each course of the dinner is specially paired with a wine to complement the flavors on the plate. For the soup and pork dishes, the White Gull poured a 2001 Berger Grüner Veltliner from Austria and a 2002 Lingenfelder Bird Label Riesling from Rheinpfalz, Germany. Although this year’s main course has not yet been selected, based on the previous year’s menu, dinner is sure to be outstanding.

Guests then stroll from the White Gull down the street to Dr. Welcker’s other famous inn, the Whistling Swan, for dessert. The inn, along with its other historic neighbors, has been designated part of the Welcker Historic District and is listed on both State and National Historic Registers.

Built in 1887 in Marinette, Wisconsin, the Whistling Swan was moved in 1907 by the Welckers across the frozen waters of Green Bay by teams of horses to its current location. It became known as Dr. Welcker’s Casino, and was the center of his growing resort. The Whistling Swan was completely renovated in 1986.

For dessert, the Whistling Swan serves a selection of heavenly sweets for diners to try. Some of the choices at past dinners have included a chocolate Irish cream torte, whiskey pecan pie and an especially favored peppermint cheesecake. As guests savor the various sweet offerings, seasonal music is performed on the Swan’s original baby grand piano.

In fact, food is only part of the entertainment of the Progressive Dinner. Music has been an integral part of the festive atmosphere from the very first year. “We had classical guitar at Thorp, a harp player at White Gull, and the piano player at the Whistling Swan, with piano music and caroling,” said Coulson of the inaugural year. “We even invited the madrigal singers from Gibraltar School.” Live music is still featured on each stop of the Progressive Dinner.

Each of the inns offers special packages for guests of the Progressive Dinner Weekends. The December 2004 and January 2005 White Gull Inn packages, for instance, include two nights lodging, the Progressive Dinner on Saturday evening, a wine and cheese reception Friday afternoon, full breakfast each morning and hot cider and popcorn Saturday afternoon.

Coulson especially enJoys getting to know the White Gull guests at the Friday reception. It serves as a way for many of the guests to get to know each other in a relaxed environment. By the time the Progressive Dinner begins on Saturday, many of the guests have become friends. “We have people who have gotten to know each other through the Progressive Dinners and come every year,” he says.

Tickets for the dinner are $90 plus tax per person and include all three stops on the dinner tour, beverages and gratuity. The Progressive Dinners are open mainly to weekend guests of the Whistling Swan, White Gull or Thorp House inns. The weekends have become so popular with out-of-town guests that there are only a limited number of spaces available for local guests. “If all three inns are full, that fills the dining room,” says Coulson. Each Progressive Dinner serves about 75 – 90 people.

The Progressive Dinner Weekends are indeed popular. Says Falck-Pedersen, “We have so many repeats who have done it every year. A lot of people sign up for the next year before they leave.”

After eight successful years, the Progressive Dinner Weekends in Fish Creek have become a winter institution in Door County. Combining the charm and elegance of an historic bed and breakfast inn with the attraction of fine food and excellent company, along with the spiritual charm and renewal of Door County in winter makes for an irresistible weekend.