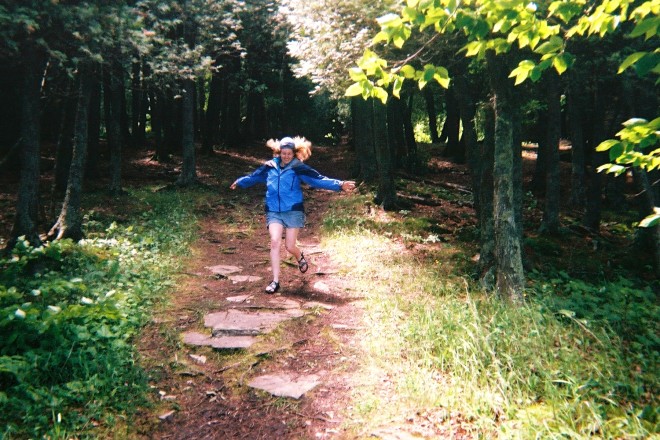 Abigail Edmonds recently spent a weekend on Rock Island, far off the tip of the Door Peninsula. Submitted photo.

Gabe arrived at my house with a sleek, lightweight backpack. His gear has special names that make us sound like adventurers—the pack is an Osprey Exos, with a Stoic tent and Therm-a-Rest RidgeRest sleeping pad packed inside.

I carried a frameless pack that my parents bought in 1991 for a backpacking trip that was derailed when their Volkswagen Westfalia broke down on the way to the trailhead.

I resurrected the big, turquoise pack from the basement, and filled it the night before we left, according to instructions on a backpacking blog, stuffing my sleeping bag on the bottom, followed by my paint and dishes, and topped off with my clothes.

On the way out of town, we picked up two disposable cameras and an overpriced bottle of Dr. Bronner’s Magic Soap so we could wash in Lake Michigan. 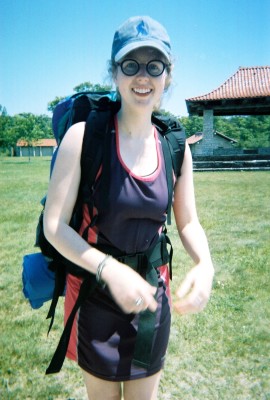 Abigail Edmonds prepares to camp on Rock Island for a weekend.

We were traveling to Rock Island State Park, a small island located off the tip of the Door Peninsula. It is only accessible by boat and there is no electricity, or plumbing, or wheels allowed on the island.

To reach the island, we took two ferries:  the Washington Island Ferry and then the ferry to Rock Island, called the Karfi.

On the Karfi, we sat next to a family of three from the Fox Cities. They’d never been camping on Rock Island before. If we could bring only one thing, they ask us, what would it be?

I had been to Rock Island five times, but it was Gabe’s first visit.

The last time I visited Rock Island, it had been for a weeklong family vacation, when it had rained every day. At the time, my family included two Labradoodle puppies, Romeo and Benvolio, who loved digging in the mud around our site and rolling in deer feces.

The Karfi docked and unloaded. We used an aluminum Foldit Cart to haul our gear to the campsite. The cart belongs to my Uncle Phil and is passed back and forth in the family for Rock Island trips. When I was younger, my parents would make a little nest of blankets in the back of the cart and pull me around the island while I read books.

I recounted this memory to Gabe, and though it was well received, he assured me that he would not be pulling me around the campground.

Through the first night and most of the second day, it rained steadily. We found shelter under an enormous stone pergola, constructed by the Icelandic-American inventor Chester Thordarson, who built his estate on the island.

We shared the porch with a troop of unprepared, gangly boy scouts, huddled around a camp stove. Their leader looked exhausted and cold.

“Only a few of them brought raincoats,” she said, flipping a pan full of bacon down onto the table. “So they’re wearing my clothes.” 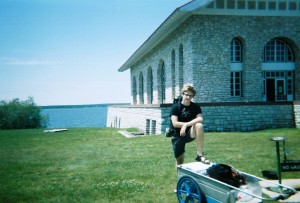 Gabe Peterson in front of the boathouse on Rock Island. Submitted photos.

Rainy days on Rock Island require patience. Gabe and I spent the day in the boathouse, playing the piano and a deck of Ronald Reagan playing cards (the ace said, “Having a little bit of freedom is like being a little bit pregnant. It just isn’t possible.”).

The naturalist on the island led an interesting historical talk in the boathouse that afternoon. The lake, he said, was two feet higher than usual.

“Why do you think that is?” a family from New York asked.

“You know,” the naturalist said, “I can’t really say.”

“It has to have something to do with climate change,” Gabe offered.

A man in the back of the boathouse interrupted, “Well he couldn’t say anything about that if he wanted to, could he, thanks to our governor.”

The exchange was unpleasant for me. When I visited Rock Island as a child, I hadn’t even considered that it had ties to the outside world. Now I wanted it back in a vacuum, where it belonged.

The next day we hiked the loop that runs the circumference of the island. The trail, which intersects on the far side of Rock Island with Pottawatomie Lighthouse, is popular among day-trippers to the island. The hike is easy and beautiful, and took us about three hours. My hiking shoes were still wet from the previous day, so I wore a pair of Gabe’s wool socks with sandals. What did I care? There was nobody to notice them. We hiked alone.

Lighthouse tours are free and are led by volunteer docents who live in the lighthouse for a week each summer. Our tour guide was a lanky man with a serious looking medical boot on his right foot, and it made me take the warning signs about the stairs to the lighthouse more seriously than I had in previous years.

That evening, we met some of our neighbors. They had spotted our dinner:  rice and beans.

“I can tell you’re new at this,” one neighbor said, “We’re having steak.”

“We had steak twice,” another said. “I wanted whitefish but they wanted steak.” 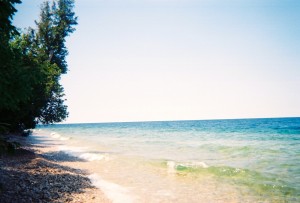 They were camping with the same New York family who had asked about the water levels.

I talked with the father about New York, where I go to school, for awhile, before he paused and said, “The reason I come here is because there’s no one from New York.”

Gabe and I spent most of our time on Rock Island enjoying the solitude. We read books, talked, and sat still and looked at the lake, and then took a walk, so we could sit still and look at the other side of the lake.

Before you set off for Rock Island, be warned:  the trip can be expensive and it takes all day. There is no electricity, cell reception is bad, there are no showers, there are many snakes, and sometimes they linger in the pit toilets. After the last ferry leaves, you are stuck on the island all night, and if, after all that, Rock Island still appeals to you, it will be your new favorite park, the one you want to tell everybody about, but don’t want anyone else to visit.