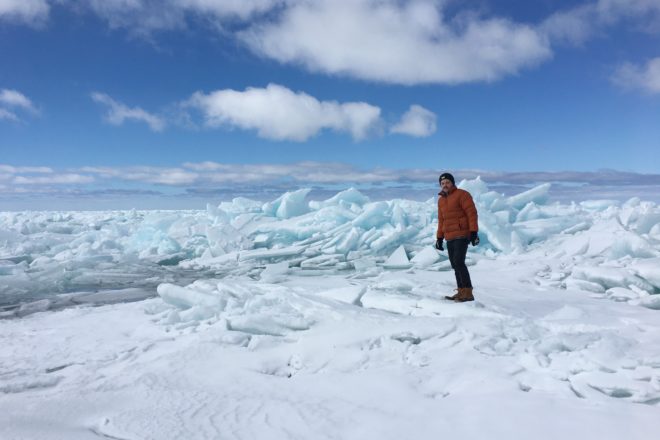 The ice shoves on Lake Michigan were huge. Photo by Celeste Benzschawel.

Last summer, I wrote up a few tips on how to spend a summer day on Washington Island. After a glorious day of driving around with the windows down, getting ice cream and going on hikes, I had to see whether winter would hold charms of its own.

Well, I almost didn’t find out because I almost didn’t even make it on the ferry. My boyfriend, Jordan, and I made it promptly to Northport Pier for the 9:30 am ride, but while buying my tickets, I was asked what the name was on my reservation.

What reservation? Was I supposed to make one?

The nice man at the ticket window told me that people are generally supposed to make reservations during the winter. In the summer I didn’t need one, so I didn’t think twice about it.

But it makes sense. During the summer, the ferry runs about every half hour. In the winter, it runs only a few times a day. Luckily, someone hadn’t shown up for a reserved spot, so we were able to take it and drive on to the ferry.

Jordan had never been to Washington Island before, so I was excited to play tour guide. Though I had been there only three times prior to our visit, I felt I knew the Island well. It’s like a grid and hard to get lost.

With us being us, we didn’t have time to eat breakfast before leaving, so naturally, our first stop was the Red Cup Coffeehouse. I didn’t realize it has limited hours during the winter, but we got there just before closing, and the people at the counter served us great drinks.

With our stomachs still rumbling, we decided to drive up Main Road to see what else was open.

Nothing was open. It was before 11 am, so none of the bars on the street were ready to serve yet. We refused to count that as a loss and decided to start our adventure elsewhere.

To the Stavkirke! The prayer path was covered in snow, but of course we had to take it. Jordan was fairly creeped out by the starkness of the dark building – with its sharp angles and points – against the snow. I’ll admit it was a little eerie with no one around and a lack of flowers and greens to balance things out.

That visit took about five minutes; then we headed out on a drive to Jackson Harbor. There we admired the ancient boats that had been pulled onto the shore and explored the nearby shoreline.

We continued our drive to Indian Point Road, which felt like the most remote section of the Island that I had been to. The roads were unplowed, and the walls of trees on both sides were covered with snow. We had crossed paths with just one other car at that point, so it felt like we were the only ones around.

We had to make the requisite stop at Schoolhouse Beach, but it wasn’t as exciting without the open, blue water. Plus, we couldn’t skip any rocks on the ice. We didn’t stick around too long.

Next was Little Lake. It was a treasure I had found last summer, so I was eager to see it again. Instead of hiking through to the lake off Main Road, we took Little Lake Road and ended up by the Jacobsen Museum: a small, hidden community of old, wooden buildings deep in the woods. It felt abandoned and emphasized that feeling of being completely alone.

We wanted to intersect the trail I had been on last summer to get through to Lake Michigan. We ran across frozen Little Lake, racing to see who could get to a bend in the trees first. We must have startled a bird, then realized it was a bald eagle after it soared into the open sky.

Finally we crossed the familiar isthmus connecting to Lake Michigan. It felt as though we had reached another planet. All we could see was white and blue shards of ice shoves piled on top of each other. The sun was bright, and the wind was powerful.

After playing around (safely) on the ice, it was time to get warm. I thought we might do so with a bitters shot at Nelsen’s Hall Bitters Pub because Jordan wasn’t yet part of the club, but it was still closed.

Instead, we went to the Granary Saloon that’s part of the Koyen Collection. It was completely empty except for the bartender and cook, who were both awesome. We had a chance to get to know the bartender, Diego, a little bit while the duo supplied us with a quick beer and lunch before we had to catch our ferry back.

Looking back on our day, I’m glad we were able to have a great time exploring Washington Island together even though, in all honesty, there really wasn’t much to do or much that was open. The remoteness was still refreshing, and I enjoyed that feeling – the Island was ours for the day.