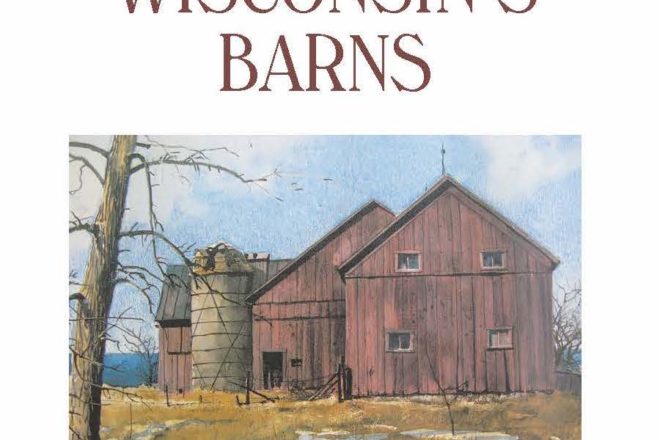 Bill Tishler has always been interested in how things are built. His dad and oldest brother were carpenters, and the family garage had a woodworking shop, so it’s no surprise that years later, the longtime professor of landscape architecture has turned his curiosity toward the building of one of the trademarks of Wisconsin’s landscape.

Tishler’s new book, Building Wisconsin’s Barns, tells in detail the stories of how the state’s barns were built.

“When I was growing up in Baileys Harbor, there were barns right in the middle of town,” Tishler recalled by phone from his home in Madison. “All of my uncles had farms in the Baileys Harbor and Egg Harbor areas. Every Sunday, we’d gather at one of them.”

He sees barns as being a part of Wisconsin’s sense of place.

“They’re even on our license plates,” he said, “but they’re fast disappearing.”

That’s why Tishler is happy to see them adapted and reused. Edgewood Orchard Galleries, Woodwalk Gallery, and wedding and concert venues all bring new life to old barns.

On the cover of the book is a painting of a barn by the late Door County artist Gerhard Miller, and a Chick Peterson painting of another barn is included.

Tishler is struck by the pride of our state’s barn builders.

“Years ago, I taught a field course in historic preservation,” he said. “I met some really interesting farmers and early barn builders, including one in Abbotsford, Wisconsin. He said he’d never lost a man on the job. That was interesting to me that he took pride in that.”

The book includes chapters on the origins of barns in Europe, their early days in America and how they were built. Most of Tishler’s favorite barns in Door County have crumbled or been torn down.

“It makes me happy to see them saved,” he said. “Having a sense of our history and our past can help us understand our future and where we’re going.”

Archway Press published the book. Email Bill Tishler at [email protected] to find out how to order a copy.