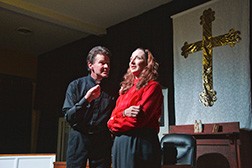 In December, Sturgeon Bay’s Rogue Theater will celebrate its one-year anniversary of bringing a variety of productions to the quaint Depot Performing Arts Center on Third Avenue. Though a milestone any theater founder (or co-founders, in this case) would be happy to celebrate, Lola DeVillers and Stuart Champeau are currently occupied with an accomplishment that stretches far beyond the bounds of Door County.

In fact, this accomplishment is on a much bigger scale than any first-year theater director could imagine – on Nov. 13, Rogue Theater was the first theater in the world to bring the English translation of the Spanish play Policy to its stage. It will continue to show through Nov. 30.

Written by Antonio Muñoz De Mesa, of Madrid, Spain and based on a real lawsuit from the Netherlands, Policy (or La Visita in its native language) follows the “cat and mouse” game of a priest in charge of a Catholic school for boys and a female insurance agent who has handled the diocese’s policies for a dozen years.

Father Damián reviews the school’s insurance policy with Esther (whose son attends the school) and determines he would like to add two new clauses to the policy: confidentiality and the definition of sexual abuse of children as a workplace accident. The play follows the issue for several weeks, during which time the conflict between the priest’s love of money and the agent’s sense of morality is the central focus.

In bringing the production to Door County, conflict wasn’t only within the script of Policy, but also in the hearts and minds of Stuart and Lola, who at first declined to do the play.

“We read it and we’re just like, ‘No way,’” Stuart recalls. “We’re both Catholic and it seemed a little too cutting edge for Door County.”

It only took one more read-through for Stuart to change his mind.

Why the sudden change of heart? While their initial reservations to the play focused on its dealings with sexual abuse and the Catholic Church, upon deeper reading, Lola and Stuart determined there was much more to the story than that.

“It’s just about this abuse itself and different institutions, how they deal with it,” Lola says. “It does need to be brought to the forefront and so at first we thought, ‘We can’t bash the Catholic religion.’ But it isn’t that at all. It’s making people aware of an issue that is everywhere and it is the right time.”

Lola will assume the role of Esther while Stuart takes on the character of Father Damián. Henry Timm will direct the production, one that he sees as having many layers, from conflicting language to intellectual seduction to the simple question: what is the difference between justice and the law?

“This is a play about conflicting morality and eventually it ends up in a conflict between justice and the law,” Henry says.

Though controversial in nature, Lola and Stuart find comfort in Henry directing the play, pointing out his innate ability to find symbolism within every element of the play while also developing the characters.

“Henry definitely has the credibility and the pedigree to take on a show like this,” Stuart says. “With this show, the character development is so important and if you have a director that doesn’t take the time to develop the characters, it’s never as good as it should be. They could be great actors but if they don’t know who they are, they’ve already got one foot in the grave as far as their performance.”

“He’s the guy who reads between the lines … he doesn’t read a play or a book like the average Joe reads a play or a book,” he adds. “He looks for the hidden meaning in everything and he finds it.”

If all goes well with the English world premiere of Policy, Lola and Stuart hope to look for other theaters to bring the show. In the meantime, they will welcome audiences with arms wide open to view the production and, hopefully, engage the audience in a post-show conversation.

“For the audience to be moved emotionally, that’s the biggie,” Stuart says.

Policy was translated by Green Bay native and part-time Jacksonport resident Phyllis Zatlin. The original play debuted in Spain in April 2013 and has since been translated to several other languages.

Remaining Policy performances will be Friday, Saturday and Sunday, Nov. 14-30. Friday and Saturday at 7:30pm, Sunday the 16th at 1pm, 23rd at 4pm, and Sunday the 30th at 1pm. Tickets are $25 and can be purchased at Greco Gallery, 24 N. 3rd Ave. in Sturgeon Bay or by calling The Depot at 920.818.0816. The Depot PAC has limited seating so reservations are strongly recommended.