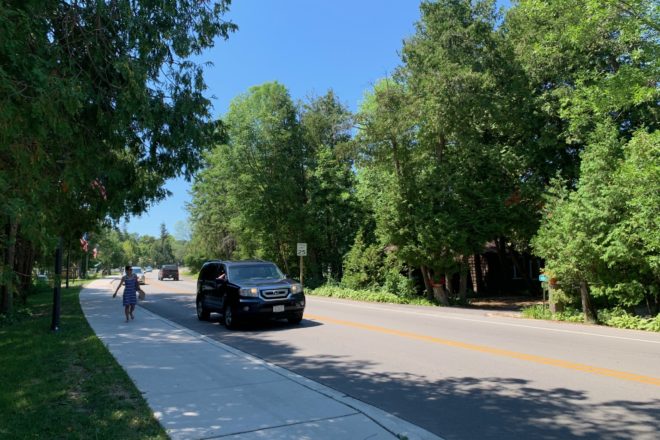 A pedestrian strolls down the new sidewalk in Ephraim, which business owners credit with improving safety and increasing walking traffic in the village. Photo by Myles Dannhausen Jr.

The process to redesign the streetscape was not an easy one for the Village of Ephraim, but one year after the main portion of the project was completed, visitors, residents and business owners are reaping the rewards of a more pedestrian-friendly village.

“It’s been nothing but positive,” said jeweler Russ Zabler, who has operated Zabler Designs on Highway 42 for 36 years.

It took at least four years, dozens of meetings and multiple different designs for the village to finalize a plan to add sidewalks, bury utilities and install dark-sky-friendly lighting to the stretch from the Ephraim Fire Museum to Brookside Lane as part of the Wisconsin Department of Transportation’s resurfacing of the highway last year.

Residents feared the reconstruction would diminish the historical quaintness of the village, but Zabler said the final product actually serves to enhance it.

“A lot of times when you’re dealing with a historic district, change isn’t necessarily your friend,” he said. “But this is the one exception where change actually kept that quaintness and amplified it with the lighting and flags. It’s hard to do a change and keep all the wins without the losses.”

Down the street at Bay Breeze Resort, manager Rachel Willems said she has heard nothing but positive feedback from her guests.

“When people asked about walking into town, we would tell them they could, but that they would have to be careful, watch for traffic and step into the ditch at times,” she said. “We don’t have to warn them anymore.”

Willems and Zabler both said that the new sidewalk seems to have spurred many more people to walk around the village.

“People walk up and down just because it’s so comfortable and inviting,” Zabler said. But his primary satisfaction is the safety enhancements.

“For 36 years, I was watching people literally jump off the street and into my driveway when cars would come by,” he said. “I always wondered when that jump would happen a little too late. Not only did it address that, but it’s unreal the positive effect it has had on the village.”

The project has been honored with multiple engineering awards, including one from the Wisconsin Section of the American Society of Civil Engineers and another from the American Council of Engineering Companies (ACEC). AECOM engineers led the project.

“The new highway is no longer just a conduit for vehicles, but a path for pedestrians going between shops, homes and the beach,” according to ACEC. “The design team created a safe, efficient and modern street that welcomes everyone to Ephraim.”

“My biggest satisfaction as board president was the time the village did take and the village participation over four years,” said Village President Mike McCutcheon. “When the board made its decision on the scope of the project, I was most pleased to see that those who were against some or all of it, people mostly got behind it to pull the rope in one direction.”

McCutcheon said the village got lucky in many respects. The weather was unexpectedly good throughout the construction period, and crews never lost a day of work due to bad conditions. When it came time to bury utilities, they anticipated they would need to dig a trench and carve through the limestone that lies beneath so much of Door County’s soil. But crews were surprised to find beachstone in Ephraim, which allowed them to bore horizontally underground, saving nearly $300,000 that the village was able to put to work extending the sidewalk from the beach to Brookside Lane, repave detour routes and enhance stormwater systems.

McCutcheon praised the ad hoc streetscape committee for the time and effort it put into the plan, which started small and then grew into a comprehensive, village-wide reenvisioning before being pared back to a scale that residents and businesses could wrap their arms around. He said he hopes the success of the project lays the groundwork for future efforts.

“You want to start very early so you’re not on some sort of time restraint,” he said. “Get as much input as you can from your residents. Start early, and go slowly to build a consensus. The original plan was too big, lost the flavor of the village, and we pared it down from there.”

That original plan included a crushed-stone, multi-use path extending to Townline Road to the north, and to Peninsula State Park to the south.

Missy LaBelle, manager of the High Point Inn on the north end of Ephraim, said her guests now wish there were sidewalks along that stretch. Between Townline Road and Orchard Road there are four hotels and resorts with more than 125 guest rooms – plus several art galleries, restaurants and attractions among them – but no paths or sidewalks.

“We have lots of guests who want to walk from the hotel and ask us where to go,” she said. “I hope we get something someday.”