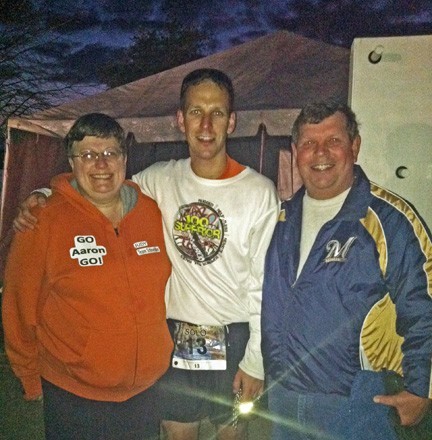 Aaron Schneider at the finish line with his mother, Judith, and his father Tom.

The sun was long gone when Aaron Schneider made the turn into Sunset Park toward the finish line of the Fall 50 Saturday night, just as it was when he started his run in the same spot the night before.

While thousands were participating in the event as part of a relay team, and dozens more were running the Fall 50 solo, Schneider was inaugurating his own Door County endurance event – the Fall 100.

As this year’s Fall 50 approached, he figured “Why not go for it on my home course?”

“I had talked to the Race Director, Sean Ryan, last year and joked that sometime someone was going to run it twice,” Schneider said after he crossed the finish line, his legs weary beneath him but his mind holding up surprisingly well. “This year I figured I better do it before somebody else does.”

He started at 8 pm Friday night, running through the night under clear skies on roads he had all to himself. He wore a headlamp as he ran, gathering a little frost as temperatures dipped to the mid-30s overnight. He was aided through his run in the darkness by Ashley Kumlien, providing water and support, as there are no aid stations at two in the morning. Kumlien would run the Fall 50 herself, doing it on no sleep.

Schneider and Kumlien arrived at the starting line in Gills Rock after 9 hours 45 minutes, giving him just enough time for a good night’s rest (of 30 minutes) and a change of clothes. Then it was back to the official starting line, a few hellos, and on to the second half of his goal.

“This event is perfect for me,” said the Sturgeon Bay native. “It’s my home course, and I knew it well and it was a great day for it.”

Conditions were nearly perfect for the sixth annual event, which drew more than 1,500 participants running from the Shoreline Restaurant in Gills Rock and past nearly every scenic vista on the peninsula on the long journey to the post-party under the tents in Sturgeon Bay’s Sunset Park. 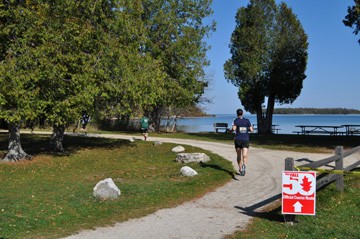 The sixth annual Fall 50 took runners down the Door Peninsula, including a swing past Nicolet Bay in Peninsula State Park.

While the top times were awe-inspiring, they all took a backseat to Schneider’s effort this year. Though his pace slowed in the second half of the run, he said his first major setback came with about 12 miles to go.

“My feet got really sore,” he said. “My pace got really, really slow.”

But his parents were out there urging him on, and with about four miles to go a childhood friend arrived.

“We had gone to the point where it was getting really tough,” he said. “My friend Phil Janes showed up and gave me a big boost. At that point you just need a spark, and a new face cheering for you does a lot. It got me going for the last four miles.”

Inside the post party tent, most of the crowd had heard about this crazy guy doing 100 miles. By 5 pm most assumed he had given up, but a little after 6:30 pm Ryan made an announcement that word had come in that Schneider was still putting one foot in front of the other and had made the turn into the park.

Most of the crowd went outside to line the final stretch of the finish line to give the day’s final finisher a hero’s welcome. Soon a bright headlamp was visible in the dark, bobbing above the crowd, and a roar let out.

He shared a long hug with his parents, then a few long embraces with friends, then somehow stood for a few minutes to talk about his accomplishment.

His dream of finishing a 100-miler, official or not, was now complete. Now, it’s time for a new goal.

“Ultra-running, it’s not like climbing,” he said. “It’s not like if you climb Mt. Everest and there’s nothing higher. There’s always something. After you finish one race it’s ‘what’s next?’ You gotta find something harder.”