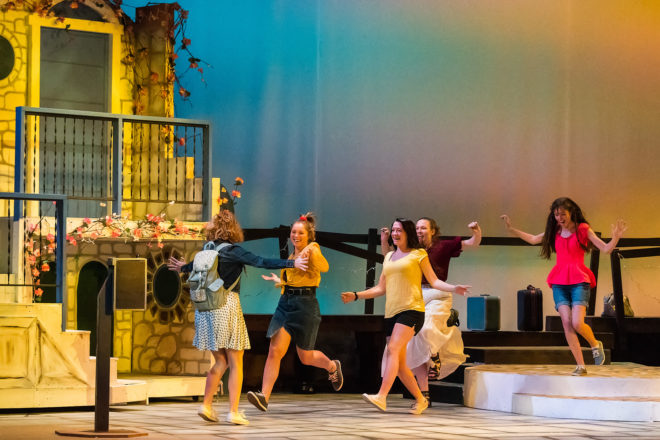 Earlier this year, on the red carpet for the motion picture Mamma Mia! Here We Go Again, members of the Swedish pop group ABBA announced their intention to create new music after a 35-year hiatus. With a worldwide opening weekend of $82 million for Mamma Mia! Here We Go Again (the largest opening weekend for a Meryl Streep film), it seems like an ABBA resurgence would be welcomed. So when it came time to decide on the 50th musical production for Southern Door High School, musical director Bonita Weydt was ecstatic to see the rights released for amateur productions of Mamma Mia! this May, and immediately filed the appropriate paperwork.

With a cast of nearly 50 students and another 25 students making up the pit orchestra, sound and lighting, backstage crew, and hair/make-up, Southern Door Community Auditorium will be transformed into the fictional Greek island of Kalokairi. In Mamma Mia!, ABBA’s hits tell the story of a young woman’s search for her birth father. On the eve of her wedding, a daughter’s quest to discover the identity of her father brings three men from her mother’s past back to the Greek island they last visited 20 years ago.

The cast, directed by Catrina Williamson, has been working on the musical since the first day of school. With the rights newly released for Mamma Mia!, Weydt said it was the perfect time to stage the musical. She said it was also a natural choice since “we have very strong female upperclassmen — with a lot of singing and acting experience.”

Singing experience will come in handy since all the musical numbers are — mostly up-tempo — ABBA numbers, the two most well-known being “Mamma Mia” and “Dancing Queen.” Weydt said about staging the production, “It is always challenging to put all the pieces together — singing, acting and dancing. From my perspective, [I’m] working diligently to make sure the music is prepared well to honor the iconic ABBA sound.”

Anyone familiar with either the stage or film version of Mamma Mia! knows there are some flamboyant costumes for certain members of the cast. When asked about how the costuming has been handled for the musical, Weydt said that Kelly Tassoul and Kim Welch have been at the helm of costuming the cast. Weydt said, “With the leading females and supporting female characters being double cast — that has been an additional challenge for them. Both Kelly and Kim are creative, industrious and have an eye for what looks good on the students and on stage.”

Visually and auditorily, Southern Door’s Mamma Mia! will be a treat to audiences, and will usher in a new half-century of musicals at the school.

Mamma Mia! will be performed Nov. 9–10 at 7 pm, Nov. 10 at 1 pm, and Nov. 11 at 2 pm. Tickets are $11; youth, student and senior pricing is also available at southerndoorauditorium.org/index.html. Southern Door Community Auditorium is located at 2073 Cty DK in Brussels.