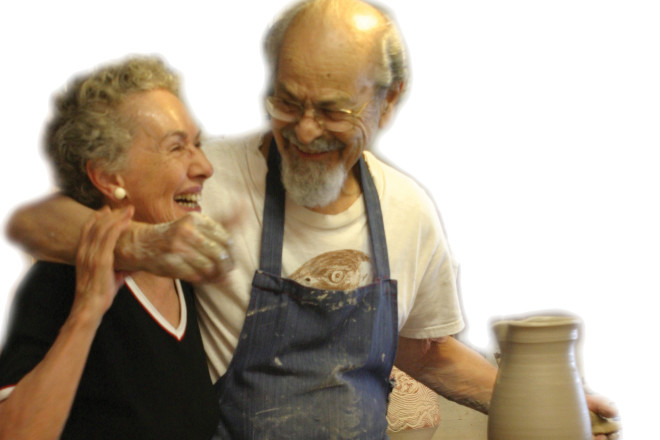 Abe and Ginka Cohn were fixtures of the Door County art scene for more than 50 years. Photo by Dan Eggert.

The Peninsula School of Art owes much to Abe Cohn and his wife Ginka, and so do I. When I began my tenure at the Peninsula School of Art, after working in nonprofits for 10 years, there was so much I didn’t know about Door County’s art history, the history of the school, and the passion and dedication of resident artists. My personal and professional relationship with Abe and Ginka changed all of that. There were so many times I was surprised, thinking “I didn’t know that,” or in awe of their achievements, vision and generosity. 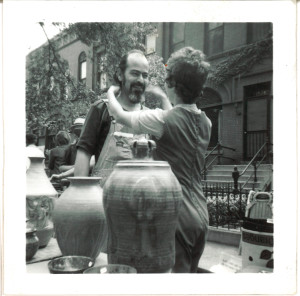 I knew the Cohns set up their first studio in Door County in 1956. Initially, Abe worked the summers in Door County and returned to his Milwaukee studio to work and teach in the off-season. I had visited the Potter’s Wheel Gallery many times, but was never formally introduced until 2003, just three years before the sale of the property to the school.

There is a path through the woods that connects the two pieces of property and as the negotiations were going on, I would walk back and forth, delivering documents, and staying to talk. At the time, I was naïve enough to believe that I was one of the first to do this. I was wrong.

About 10 years after they began the Potter’s Wheel, Madeline Tourtelot – filmmaker, photographer, jeweler and painter – founded the Peninsula School of Art. A few years into her venture, Abe brought an apprentice to Door County for the summer, a potter named Takashi (Kash Yamada). Abe and Ginka built him a room off the gallery, but Kash wandered through the woods to the Peninsula School of Art, met the rather audacious Madeline, and was soon living and working next door. This defection caused a small rift between Ginka and Madeline, two strong, passionate and outspoken women, but it never changed how Ginka perceived the school and it never stopped Abe from taking on the role of mentor to many other potters over the years. 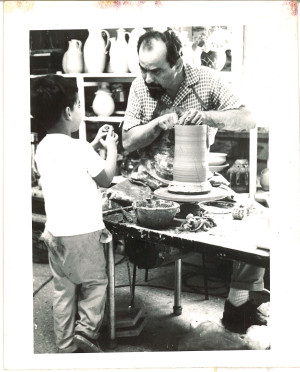 Abe and his son. Submitted photo.

Going through past Peninsula School of Art catalogs is a tribute to his legacy. John Dietrich, John Hansen and Renee Schwaller, to name a few, were all Abe’s students, apprentices and mentees. Throughout the early and mid-2000s, Peninsula School of Art had a program for emerging artists, and one of those was Chad Luberger of Plum Bottom Pottery. He came to the school with a desire to become a potter. He took classes, worked independently in our studio, and eventually he, too, wandered next door to seek out Abe. Despite being in his 80s, I watched Abe mentor, guide and teach Chad his craft.

I remember one afternoon at their always crowded and overflowing kitchen table, Abe was finishing his lunch and Ginka was busying herself in the kitchen, and I asked why they chose Door County. They looked at each other, as they always seemed to do before speaking, and then Ginka (ever her husband’s cheerleader) launched into the story, telling me about how Abe was the first potter in Door County – how there wasn’t anything really here, and how they just “knew.” Abe smiled that slightly sly smile and nodded in agreement.

I understood that feeling of just knowing. People like them – artists and entrepreneurs – attracted me to this place. It’s hard to imagine the peninsula without an art scene, or more astounding, of being one of the first to see what was possible in this place.

When we finally sat down to sign the sale papers, it was a quiet affair, just Abe, Ginka, the attorney and myself. After the attorney left, we sat and talked. I learned just a few weeks earlier that in 1995 Abe and Ginka sold the school the property on which our main building now stands – making the dream of a year-round teaching center possible. Now, here they were again, ensuring that both the school’s and their legacies would continue. They were excited. They saw this sale as the “right thing to do.” They could have sold the property for commercial or condo development, but they believed there was a need for a place to nurture artists, a place like the Peninsula School of Art. Abe said, “Art should always be made on this corner.” We will try to do justice to their dream. 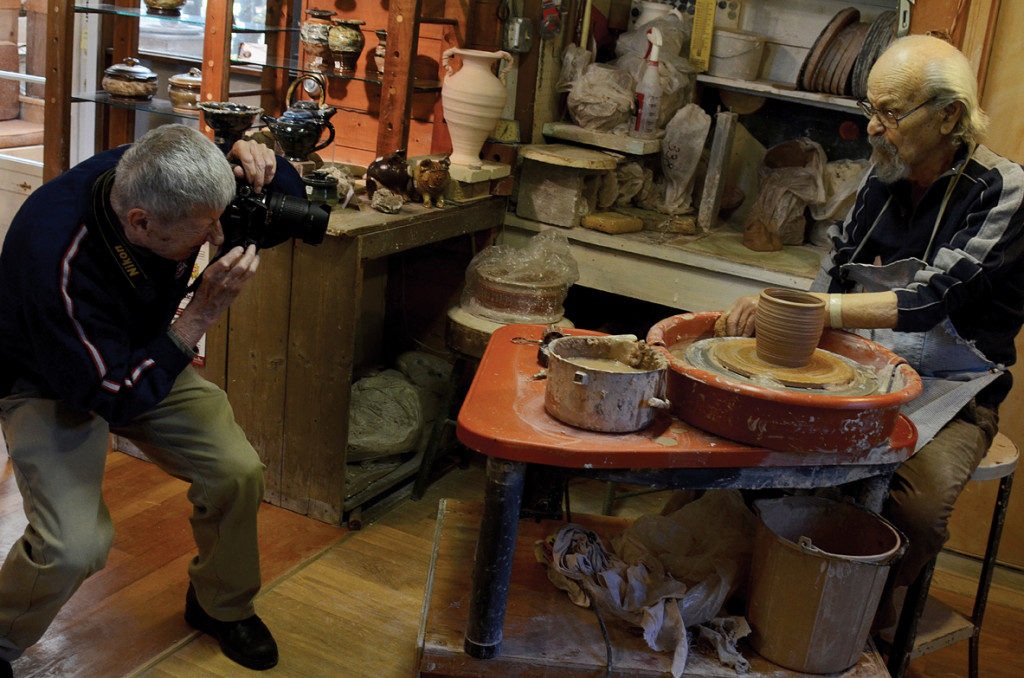 In 2007, we decided to host a retrospective exhibition of Abe and Ginka’s work, both to honor them and celebrate the merger of the two properties. Abe, with Ginka’s help, began to go through his early works, which to my surprise, were not ceramic mugs, vessels or teapots, but amazing abstract paintings. Every few days as we prepared for the show, they would come through the woods, carrying a painting, almost like, “look what we found.” Many of these paintings were in their home, but had not been exhibited since his early college days in Madison. When looking at the works, it was easy to see how Abe’s glazing and carving techniques had evolved from the lines and patterns of his paintings.

In my new role as de facto landlord, I would often walk the path, to check on the property, and spend some time with Abe and Ginka. One day I wandered into his studio, in the back of the Potter’s Wheel. Looking around I thought, “What is all this stuff and how could he possibly have any idea what is in here?” I was overwhelmed. There were buckets (some labeled, some not), bags of glaze chemicals, clay and other ephemera from a lifetime working in ceramics. Abe was in the back, loading a kiln, and I asked him, “Do you still use all of this stuff?” Once again, he smiled a slow smile, and took me to look at one of his notebooks. During his entire career, he had meticulously recorded his process, the variations and combinations that created his unique pottery. His work was not about jumping from one thing to the next, feeling a small sense of accomplishment and moving on, but about the evolution, the learning, and the focus of true mastery.

Now that they are both gone, I will miss my walks down that path, my impromptu lessons on movement and dance from Ginka, the art of ceramics, or the art history of the place I have grown to love. 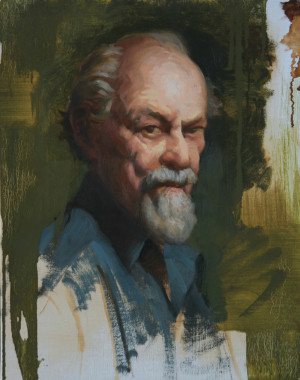 Abe Cohn started his artistic life as a painter, but became a full-time professional ceramist in 1952 when he set up a workshop in a Milwaukee basement. Four years later he and his wife, Ginka, headed north to open the first pottery studio in Door County, Potters Wheel Gallery in Fish Creek, which he ran until his death on May 10, 2013, two years and three days after Ginka’s death.

During the 57 years he worked clay in Fish Creek, Cohn became the first craftsman to be given a solo exhibit at the then-new Memorial Art Center of Milwaukee (1964), co-founded the Door County Potter’s Guild (1976) and received a Wisconsin Visual Arts Lifetime Achievement Award (2010). He also mentored scores of other potters who sought him out for his creativity and willingness to share. He often offered them this advice: “Get centered. Keep asking questions as you grow. Live your vision.”

A fund in memory of Abe Cohn has been established at the Peninsula School of Art. The fund will be used to continue Abe’s legacy and support the tradition of ceramic education on the Door Peninsula. Gifts may be sent to: