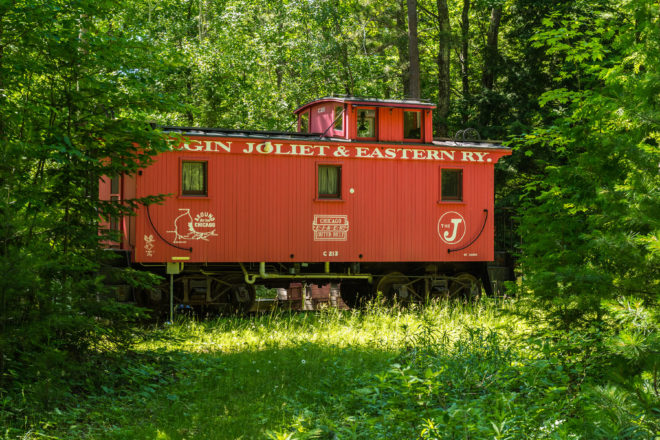 When Jim Lennert, a train enthusiast, told his wife, Connie, that he was going to buy the caboose that would become their Door County summer getaway home, she had two stipulations (a good deal fewer, it might be noted, than such a proclamation may have elicited from other spouses).

The first:  it must be painted red, in homage to The Little Red Caboose book she’d read to her first grade classes. The second:  it must be located in the woods.

“It wasn’t a surprise that he wanted to do this,” Connie said, referring to the purchase. “He’d been talking about it for years. I just didn’t want it to be set down in the middle of a cornfield somewhere.”

The Lennerts discovered the caboose that was to become their home outside the historic train depot in downtown Sturgeon Bay in 1997. It had been transported to Door County years before and used as a gift shop. Soon after Jim saw the “For Sale” sign, he and Connie found a wooded lot 10 miles north of town on Bay Shore Drive and began making the arrangements necessary for moving his 20-ton dream. (Crane? Check. Flatbed truck? Check. Video camera? Check.)

Although trains do, of course, traverse cornfields and prairies and all sorts of terrain, Connie’s inclination for housing their caboose in the woods was an appropriate one. Originally part of the Lake Superior & Ishpeming (LSI) line, the Lennerts’ caboose spent its working days travelling through the thick forests of Michigan’s Upper Peninsula.

The LSI (known, also, as the Little Sally & Imogene) began operation in 1896 and was responsible for hauling iron ore out of mining towns like Ishpeming and Negaunee on the Marquette Iron Range to docks on Lake Superior where ships waited to transport it to industrial centers on the lower Great Lakes. LSI owned 241 miles of track. The men responsible for the safety of the trains on the tracks — the rear crew — rode in the caboose, also called the crummy, doghouse, glory wagon, zoo, brainbox and go cart.

Jim points out that contrary to what many people think, “the head man on the train is the conductor, and he rode in the caboose.” The conductor on a train fulfilled a role similar to that of the captain on a ship, and, in fact, in the early years of the railroad, many conductors were former ship captains. The very word “caboose” is thought to have derived from the Dutch “kombuis,” a word used to describe a ship’s galley. 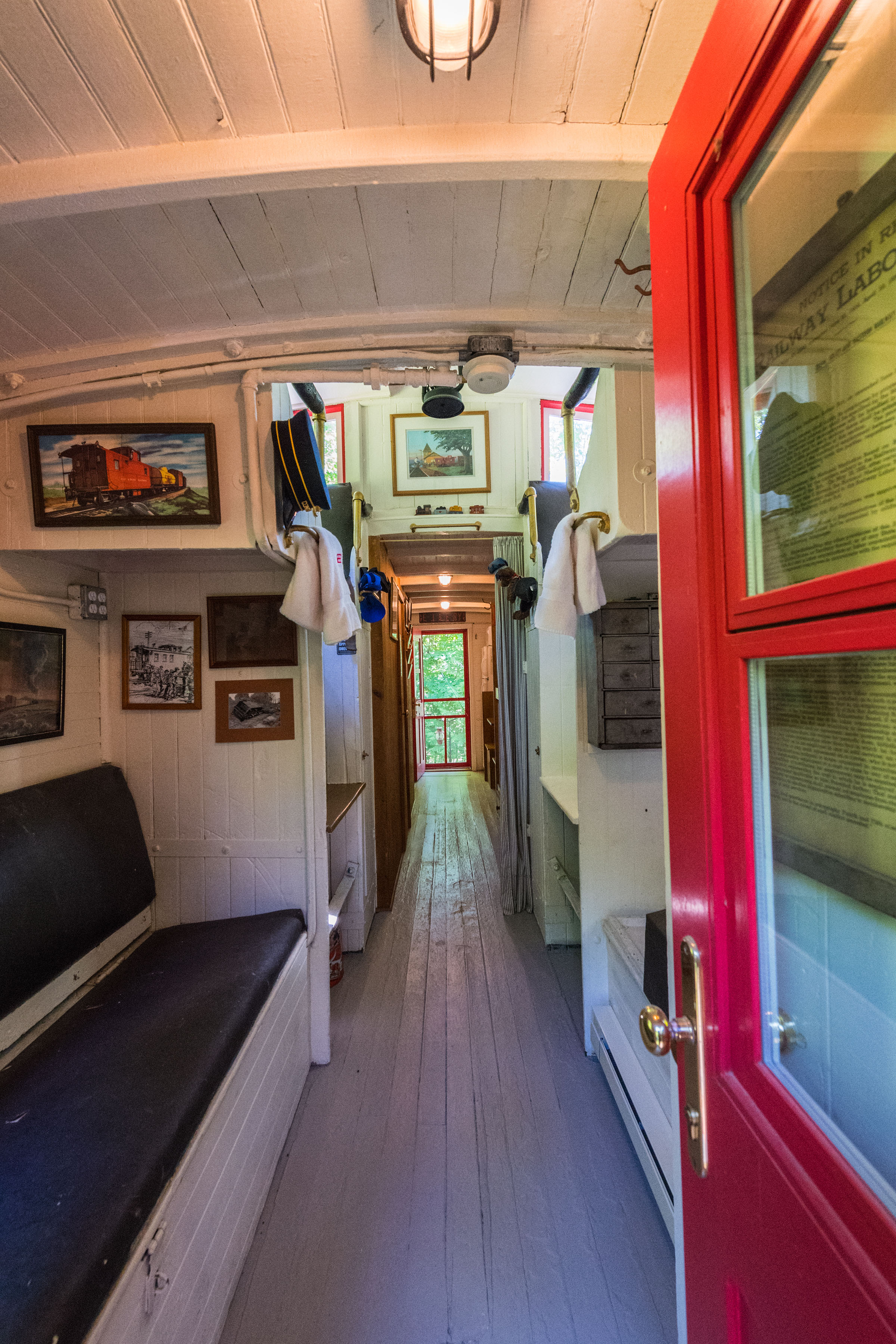 A whistle from the engineer at the front of the train signaled the caboose crew when the train needed to slow down or stop. Upon hearing it, the brakeman would leave the caboose and move forward from car to car using a club to manually twist the brakewheels. He would meet the front brakeman halfway. When the train stopped, the flagman, another member of the caboose crew, would jump off and run down the line, placing flags and lanterns to alert approaching trains.

Cabooses first came into use in the 1840s and for many represent the golden age of the railroad. Painted red, they were recognizable symbols of progress and the American dream of expansion. Prior to their invention, railroad companies housed crews in boxcars or shanty-like structures built on flatcars. The first caboose is attributed to Nat Williams, a conductor on the Auburn & Syracuse line who decided to use an empty car at the end of one of the trains as his “rolling office.”

What began as a rough and ready workspace with a barrel for a desk became, over the years, a haven for men who spent a good deal of time on the tracks. A conductor was typically assigned his own caboose and historic photographs portray cozy spaces, some personalized with curtains and family photos. Even the most domestic cabooses, however, have a decidedly utilitarian, male quality about them, reminiscent of other manly oases like clubhouses and tree forts.

The cabooses were outfitted with sleeping bunks, a small kitchen, a workspace, a toilet (the straight-dump type originally and eventually the chemical variety) and storage for the many tools of the trade. The caboose really was a home away from home for the railroad crew. 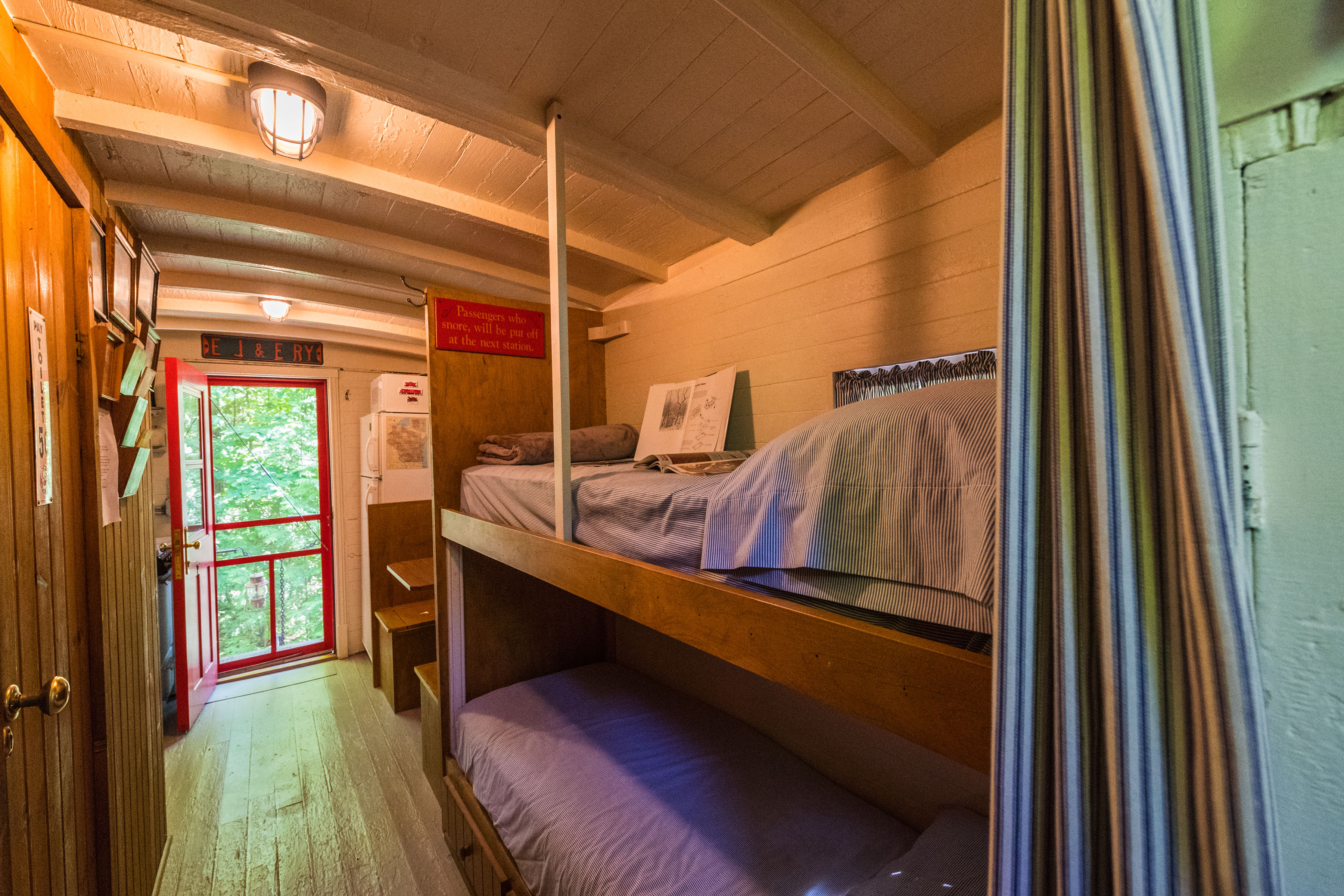 The Lennerts’ “Little Sally  & Imogene” caboose became a home away from home for them, too.

“We’d been coming to Door County since the late ’70s,” said Jim, “and it was our dream to have a home here. The caboose allowed us to combine that dream with helping preserve a bit of history that I love. It seemed like the right thing to do.”

Jim’s love of trains in general, and cabooses in particular, began when his father, a brakeman on the Elgin, Joliet & Eastern Railway (EJ & E), took him as a small child for a ride in a caboose. He now owns more than 100 model cabooses of different lines and a vast collection of other railway memorabilia. Some of the memorabilia is artfully displayed inside and around the caboose, including kerosene lanterns, a coal bucket and a letter sent to Jim’s father, Frank J. Lennert, on EJ & E company letterhead. It acknowledges his 46 years of employment on “the ‘J.’” One of the final things the Lennerts did when turning the caboose into living quarters was to repaint it with the EJ & E insignia in tribute to him.

The Lennerts’ caboose, with its scant 200 square feet of living space (192 to be exact) is, in a word, charming. It is eight feet wide and 24 feet long and much of the original interior has been retained. 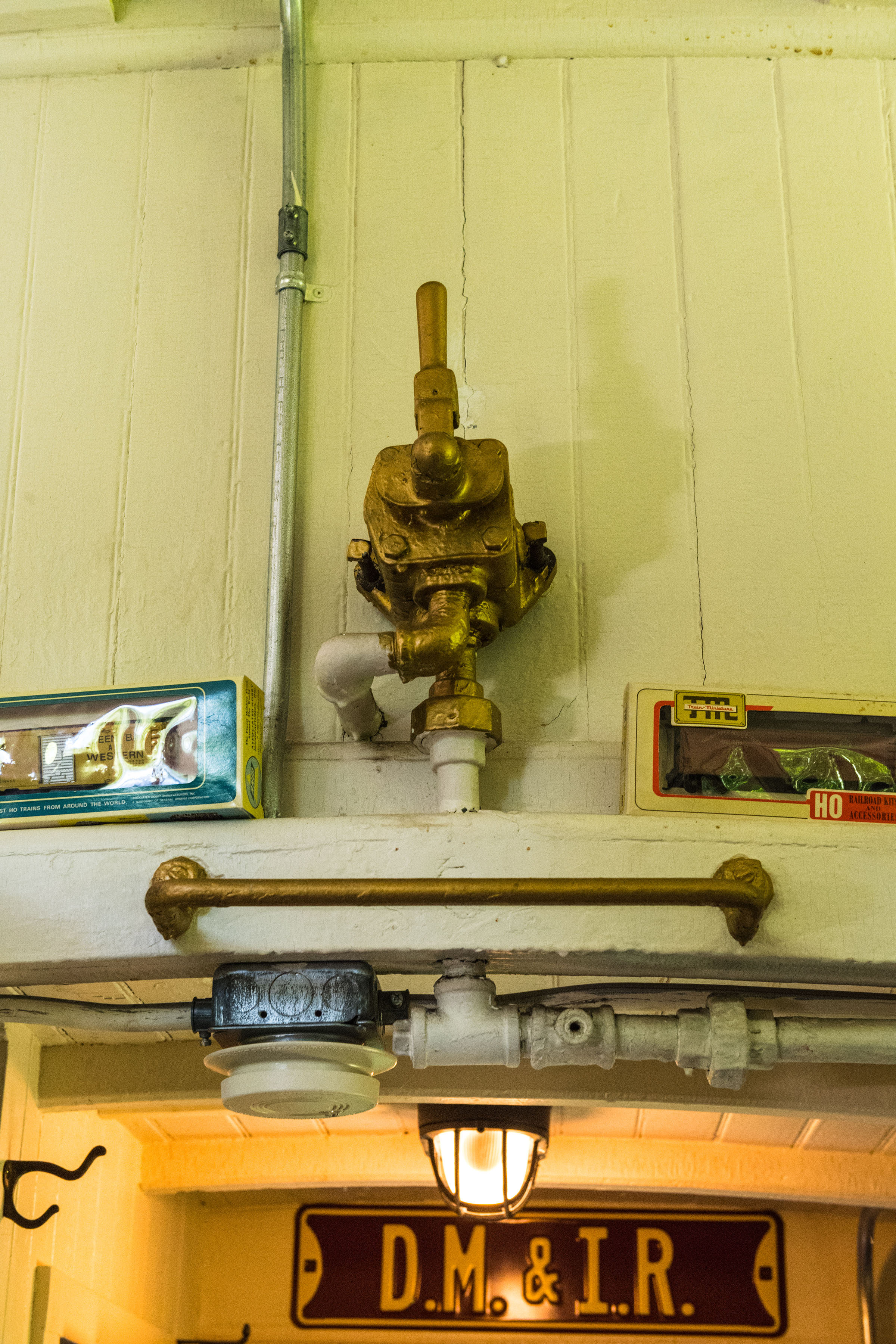 Plumbing and electric heat have been added. Sleeping berths; a kitchen with stove, refrigerator, sink and microwave; a small bathroom with toilet, sink and shower; and a seating area in the cupola or “crow’s nest,” are laid out efficiently.

A black metal ladder on the outside of the train offers access to a “deck” of sorts — a roof-top space ideal for star-gazing. Eventually, the Lennerts built a small, depot-like structure near the caboose that provides additional sleeping space, storage space and collection display space. It is, according to Jim, “almost a train museum.”

The Lennerts, who have been married for 47 years, also collect pewter tankards and antique furniture. Like Connie, Jim was an educator. He taught geography for nearly four decades. He describes himself and his wife as “creative thinkers. We know what we want and we’re open to unusual ways of making it happen.” He thinks for a moment and then adds, “What we really are is absolute collectors.”

When asked if they had perhaps taken collecting to a new level with the caboose, he laughs heartily. “I guess you could say we did!”

In addition to being creative, the Lennerts are forward thinking. They were a bit ahead of their time, presaging the general population’s embrace of the “tiny house” movement.

“Cabooses make excellent tiny houses,” Jim said. A quick search of the internet confirms this. Floor plans and examples of caboose homes located throughout the country, some heavily modified, others not, are readily available. 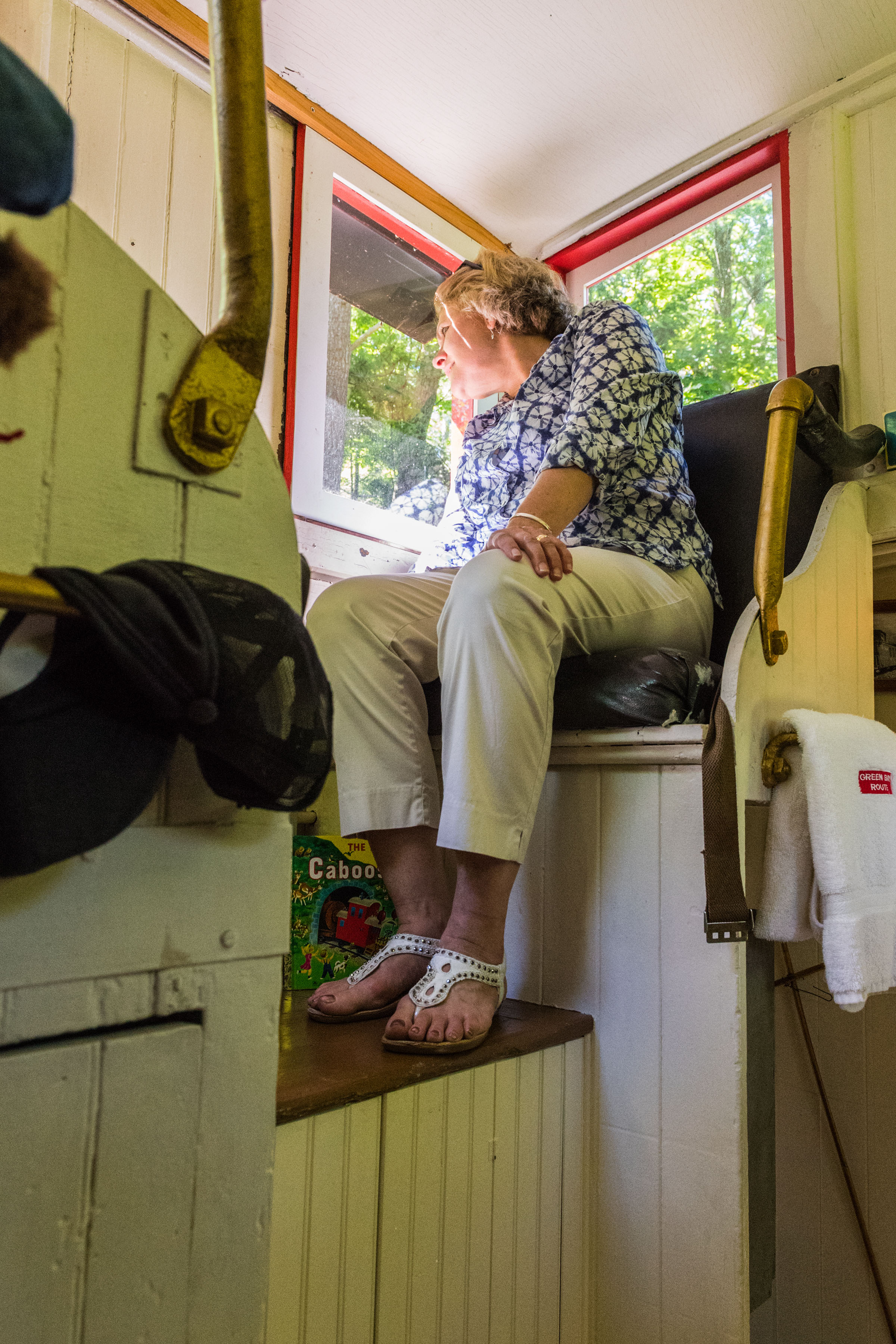 “Because they’re so small, they’re inexpensive to heat and maintain,” he said. “Ours has been reroofed and resided. We used yellow pine. It’s good to go for another 100 years.”

In addition to being collectors, Jim and Connie are preservationists and wanted to keep the land surrounding their caboose as natural as possible. They don’t mow or landscape. “It’s just the way we want to live,” Connie affirms.

Since the 1980s, cabooses have gone the way of other American iconography like little red schoolhouses, lighthouses and blacksmith shops. Technological advances have offered improved safety and reduced costs by minimizing or eliminating human involvement. And while cabooses are still used occasionally, they’re no longer needed on long routes and no longer assigned to individual conductors.

In a life enhanced by trains, the obvious metaphor is the journey and the stops and stations visited along the way. Door County was one stop on the Lennerts’ journey. The little red caboose is now on the real estate market and they are busy preparing for the next leg of their adventure. They hope that its next “passengers” will share not only their ethic about the land surrounding it, but will appreciate its history and place in America’s story.

Where will the Lennerts disembark next? They are moving to California to be closer to grandchildren. And how will they get there? By train, of course.

are the key to being happy and successful…

The mystery to everyone is:

We do not know at which station we ourselves will step down.

So, we must live in the best way and offer the best of who we are.

It is important to do this because when the

we should leave behind beautiful memories

for those who will continue to travel on the train of life.

Thank you for being one of the passengers on my train!

Have a very pleasant journey!