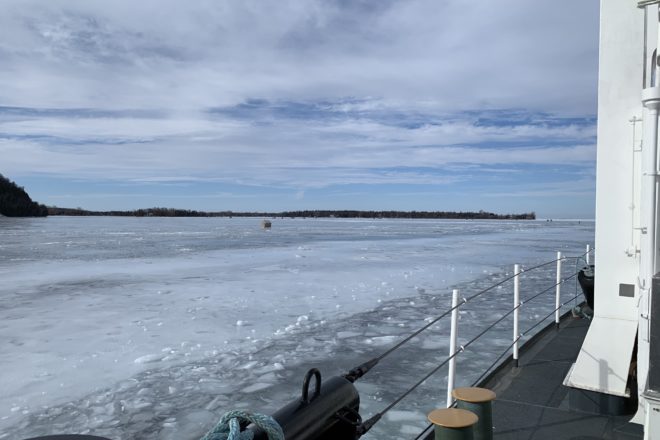 Crew members of the Mobile Bay advise against placing fishing shanties near the shipping channel, but some fishers remain dangerously close. Photo by Celeste Benzschawel.

During the summer of 2019, I explored the Sturgeon Bay shipping canal by kayak. There were warm breezes, open waters and views of both the city and the lands protected by the Door County Land Trust.

This winter I returned to the canal, but on a much larger vessel: the USCGC Mobile Bay icebreaker. Where I was once sitting atop the water, I was now many feet above it, looking down from the ship’s upper decks.

The frigid, winter air was almost painful while standing outside on the decks, and the canal’s water was covered with a thick layer of ice and snow in most spots.

I got here thanks to an invite from Carly Sarkis, marketing and events director for Destination Sturgeon Bay. Crew members invite their own families and community members onto the ship every couple of months for an afternoon trip to thank them for their support. Among the guests this day were Sturgeon Bay Fire Chief Tim Dietman and Assistant Fire Chief Kalin Montevideo, veteran members of the crew, and mothers with their young children.

View this video from Peninsula Filmworks for a close-up look:

We traveled much faster than a kayaker could, but it still felt like a slow process. Now I understand why people are often late for appointments after getting stuck crossing the bridges.

The Mobile Bay’s main mission is to break the ice in the northern Great Lakes to provide safer waterways for other vessels, such as the winter fleet that anchors at Fincantieri for repairs and upgrades.

It’s also called a “cutter” because of the way it cuts paths through the ice. The Mobile Bay had already cut a path through the ice earlier in the day, so it was smooth sailing until we neared Sherwood Point.

That’s when we cut some ice for real. Let’s just say it was really loud –  like thunder. Lt. Commander Steve Kingsley said the ship used the “hinge effect”: the vessel rides on top of the ice and uses its weight to make the ice collapse. The vessel can also use its wake to break the ice when it generates enough speed.

“We try to do a combination of breaking and using our wake so that the vessel following behind us can follow a lot easier,” Kingsley said.

There were a lot of ice-fishing shanties out on the ice that day, some of which seemed dangerously close to the ship. In fact, Kinglsey said that a few of them were actually in the shipping channel.

“We always try to communicate to the public that it’s not the best idea to have your shanty directly near a shipping channel,” Kingsley said.

During our ride, we explored the ship’s various decks, pilothouse and galley/mess. The pilothouse – also called the “bridge” – was the most popular spot. There, guests were able to watch the crew members steer the ship with its wheel and controls. The pilothouse offers unobstructed views of the water.

The galley/mess is the kitchen/eating area, which also doubles as a place for socializing and watching TV.

During the trip’s few hours, it was interesting to observe how the crew members operate. Each wears a blue hat, and they reply to each other by saying, “Very well.”

“One of the nice things about this unit,” Kingsley said, is that “it has a crew of about 30 people, so it’s small enough that we get to really know each other and interact. From the senior guy on the boat down to the most junior member, we interact. On larger vessels, that’s not always the case.”

The sense of family was easy to see. By the end, it almost felt like we were part of the family, too, especially when one crew member shouted, “We’re all icebreakers now!”