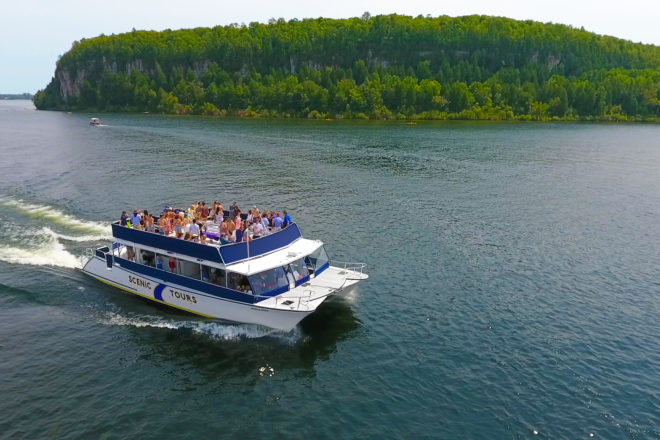 On a beautiful July Tuesday, I sailed out of Sister Bay aboard the Norra Dörr, the newest — and largest — addition to Door County’s many options to get on the water. Measuring 24 feet wide and 63 feet long, the double-decker Norra Dörr began offering cruises out of the Sister Bay Marina in 2017.

As Captain Cal Lundquist guided the Norra Dörr out of the bay, I enjoyed the sunshine on the boat’s top deck and watched as we glided away from the bustle of the town toward the calm blueness ahead. If you’re like me and can handle only so much sunbathing on the top deck, then taking in the views from the lower deck offers cooling shade and a selection of refreshing beverages at the bar.

The North Shore to Death’s Door Cruise — one of four scenic cruises offered aboard the Norra Dörr — takes passengers on a two-hour tour of areas related to the Potawatomi people who once called the area home, the Niagara Escarpment, the history of French explorers, historical shipwrecks and the county’s commercial-fishing heritage. The name of the boat itself, Swedish for “Northern Door,” is a nod to the prominent Scandinavian influence in Sister Bay.

The cultural and historical footprints of the Potawatomi tribe have been left most obviously in the names of many Door County landmarks. As we cruised by the Sister Islands, I learned that the Potawatomi gave the two islands that name because of their presence in the lake as twin guardians of the bay.

Moving farther from Sister Bay and its two stalwart guardians, the bluffs of Ellison Bay Bluff Park dwarfed the Norra Dörr. Rising above the water, the limestone walls of the Niagara Escarpment stood as geological characters that were as expressive and full of stories as the Sister Islands.

Our tour guide noted the caves dotting the surface of the cliff face. These house seashells and coral that are evidence of the prehistoric Silurian Sea, which spread across much of Wisconsin about 520 million years ago. It rose about a hundred feet above the current water level, eating into the limestone and creating pockets of geological treasures that are still there today.

With roots entwined with the prehistoric bluffs, the gnarled northern white cedar trees anchored in the cliff face — and twisting out from the rock with shocking tenacity — have their own stories to tell. Because of the harsh conditions of their rocky home, the trees grow only about half an inch every five years. Some of them are 600 to 700 years old.

More recently — relatively speaking — 17th-century French explorers turned to the trees for nutritional help at the suggestion of the Potawatomi. Because these explorers were eating only fish, many of them were suffering from scurvy. Apparently, the Potawatomi instructed them to eat the bark of the cedars because it contains about as much vitamin C as a citrus fruit.

As we passed Ellison Bluff Park, we waved at the people who were taking in the view of the water from the bluff lookout and sailed into the Death’s Door passage. During my time in Door County, I have heard conflicting stories about how Death’s Door — and consequently, Door County — came to be so named. Was it because of the area’s treacherous rocks and unpredictable winds? One of the shipwrecks featured on the cruise — the 1888 wreck of the Fleetwing schooner that rests at the bottom of Garrett Bay — seemed to support this version of the etymological story.

As we passed by Plum Island, home to one of Door County’s 11 lighthouses, we were lucky enough to spot a pair of adolescent bald eagles perched in a tree — a fitting end to a cruise that had already been full of beautiful views and fascinating histories.