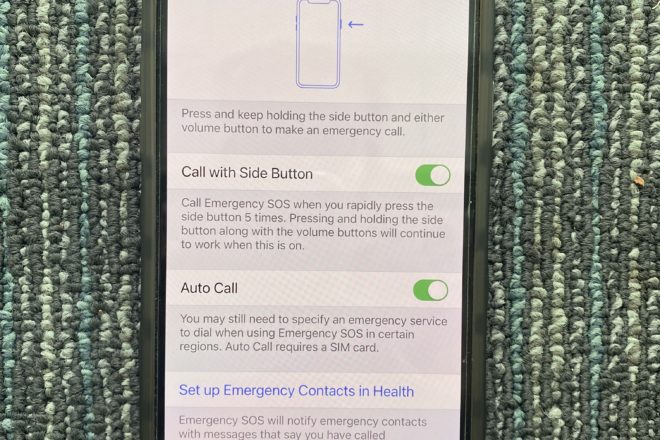 Know how your device makes 911 calls to prevent accidental misdials. This iPhone’s emergency SOS details are found in the Settings section.

How to be sure you’re not making one, and what do if you are

If you didn’t know your phone or watch is making 911 calls, you’re not alone.

Between Friday, July 9, and Monday, July 12, the Door County Sheriff’s Office incident reports logged accidental 911 follow-up calls – or emergencies that were not emergencies – 62 times. That’s 21% of the 297 911 calls received during that period.

It’s not a fluke. Accidental 911 calls account for “about 20-25% of our monthly call volume, or one out of every five calls,” said Dan Kane, Door County’s emergency management and communications director.

“We’ve seen an uptick in accidental misdials in the county,” he said. “Not just the county. This is a pretty big problem across the country. What it does is, it ties up our resources here and takes us away from other 911 calls.”

The culprits are the phones and watches always at hand, wrist or pocket. The devices have built-in SOS shortcuts to make 911 calls. Users of iPhones, for example, can go to their settings and learn under “Emergency SOS” that pressing and holding the side button and volume button simultaneously will make the emergency call. Rapidly pressing the side button five times will also do the trick.

“If you’re on a jet ski or it’s in a tight pocket bouncing around, they don’t realize it, but the phone is calling,” Kane said. “We’ll hear someone on the golf course, on a golf cart.”

Users should familiarize themselves with the ways their phones or watches call 911 and take proper steps to prevent accidental misdials.

“Our biggest recommendation is for people to look into that depending on their device and learn how their phone handles emergency calls,” Kane said.

Sometimes parents remove the phone’s SIM card – the tiny, portable memory chip that stores information about the user – to let children play with the phone. But some phones are capable of calling 911 even without the SIM card.

“We get a few of those from kids,” Kane said.

If you do call 911 accidentally, don’t hang up.

“A lot of people hang up, and that requires more work to try and track down if there is or is not an emergency,” Kane said.

That means calling the caller back or trying to track the call if the caller doesn’t answer, which can take a long time.

“Stay on the line; realize you’re not in trouble,” Kane said, and speak to the dispatcher to answer a few questions. “It won’t take more than a minute to clear the emergency.”

If the accidental 911 caller notices the call and hangs up before the phone rings, dispatch likely still received the call.

“They come into the center quicker than traditional calls,” Kane said. “We’ll get quite a few of those.”

Kane said they have protocols to follow and must connect even with accidental callers.

“We don’t do it because we want to do it, but because we have to,” Kane said. “We have to make sure there is no emergency.”

He cited the 2008 case of Denise Amber Lee, who was kidnapped from her Florida home. During the hours that followed, she was able to use the abductor’s mobile phone to call 911 and stay on the line for six minutes – an act that should have saved her life. Tragically, the 911 system failed her. Two days later, she was found murdered and buried in a shallow grave.

“She ended up getting murdered that night, but what came of it is 911 hang-ups, or follow-ups, are important, and it’s on us to make sure that even if 99.9% are not Denise Amber Lee, that we catch [those] that are,” he said. “That’s why we do it. We have to do our part to make sure everything is OK.”

• Avoid putting your phone in a tight space such as a cup holder. Holding down the power and volume buttons can trigger an emergency call.

• Avoid putting your phone in your pocket while mowing the lawn, using a jet ski, riding in a golf cart or in other situations where the phone can freely bounce around. Pressing the power button five times in a row can trigger an emergency call.

• Avoid letting children play with your phone unattended. Even an old phone without a SIM card can still dial 911.

• iWatches will dial 911 through certain hand motions or by putting them on a charger.

• Go to your phone’s settings to see how your device handles emergency calls. iPhone settings refer to it as “Emergency SOS.”