Surely there are hundreds of people in our county who feed birds and have similar experiences with these wild creatures – the accipiter hawks – throughout the year. It’s highly possible that this is the time of year when people may have an accipiter also visit their feeders. No doubt plenty of these thoughtful and caring folks feel, as we do now, how the wildlife must be suffering during this Arctic blast from Jan. 6 – 8, with a wind-chill factor down to about -40 degrees at times.

Undoubtedly there is safety in numbers with a flock of at least 30 American Goldfinches feasting at the seeds. Suddenly without warning, into the feeding area dives a Sharp-shinned or Cooper’s Hawk and gets one of the birds. This is an unfortunate incident in the eyes of some people who insist that we are the guilty parties for luring the songbirds to our feeders in the first place.

We don’t look at it this way or we’d have never begun feeding birds in the first place nearly 50 years ago. The population of small songbirds greatly outnumbers the birds of prey. Do we feel badly for the American Tree Sparrow or Goldfinch that was taken by the little Sharp-shinned Hawk? Yes we do. Do we feel good about the little hawk getting some food on this bitter cold day? Yes we do. 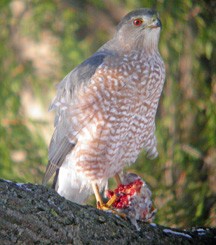 The lone Sharp-shinned is but one in an aggregation of several hundred birds more or less living together in the wild. Studies have proven quite undeniably that the greater percentage of the small birds taken by their predators have slowed down in their reaction time due to illness, injuries, old age, etc.

Many people will describe this predator-prey relationship as “survival of the fittest.” In the long run, the predators are unknowingly ensuring that the healthiest of the birds remain to breed, which in turn will make for a far stronger race of their kind.

Too many people apparently cannot accept the fact that predatory birds are not wantonly killing “their” songbirds but rather doing it only in order to remain alive. Charlotte and I like to admit that we don’t live to eat, but rather eat to live, just as do all forms of wildlife, predators and prey alike.

Paul Errington, famous marsh expert and nature writer, said, “It is unfortunate that man, the specialist in evil, sees in predation among wild animals so much evil that isn’t there.” Olaus Murie, one of the greatest naturalists of all time, wrote, “A dead eagle is both an economic and a spiritual loss.” And Aldo Leopold summed it up well when he wrote, “The swoop of a hawk…is perceived by one as the drama of evolution. To another it is only a threat to the full frying-pan. The drama may thrill a hundred successive witnesses; the threat only one—for he responds with a shotgun.”

The reason I mention briefly in this story only two of the three accipiter (ak-SIP-i-ter) hawks, the Sharp-shinned and the Cooper’s, is that it’s very rare to have a Northern Goshawk (GOS-hawk), the third and largest of the tree, visit your feeders. Actually the Sharpies and Cooper’s rarely remain this far north in winter, so it’s even unlikely that you’ll have one at your feeders, looking for a meal of a small bird. 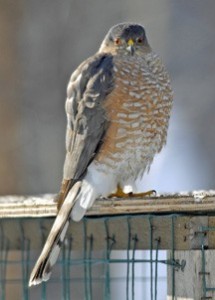 This Sharp-shinned Hawk has its “long underwear” lowered to protect its legs. Note the squared-off tail.

Adult Sharp-shinned and Cooper’s Hawks are similarly colored having a dark blue-gray on their upper back parts while their breasts and abdomens have horizontal barring of light reddish brown and white. First year birds have brown upper parts and heavily and vertically streaked white and brown breasts and abdomens.

Both of these smallish hawks have long legs, with the Sharp-shinned having sharp keels on the leading edges of its surprisingly thin legs. By far the most vulnerable body parts to cold on these hawks are their legs. What does help these and other birds keep somewhat warm during these frigid days is that their legs and feet are constructed differently than ours to prevent them from freezing. Their legs and feet lack the extensive capillary system found in humans’ extremities. The birds’ blood vessels in their legs are interconnected by large tubules, which suffuse their legs and feet with a constant movement of warm blood. Furthermore, their legs and toes are composed primarily of chitinous tissue that is very slow to freeze.

Many of us wear long underwear to protect ourselves from the winter cold. These long-legged hawks can temporarily, in a sense, fashion their own “long johns” by simply lowering the longest of their belly feathers, which quite nicely help to cover their legs.

My friends Mike Madden and Nick Anderson and I were fortunate while on the Sturgeon Bay Christmas Bird Count, Dec. 17, 2006, to watch the drama of an adult Cooper’s Hawk capturing and devouring a Mourning Dove. From start to finish the hawk worked at plucking and consuming its prey for 52 minutes. Yes, all accipiter hawks pluck their victims before eating them. This large female, having the typical somewhat flat head which was blackish on top, had her belly feathers lowered warming her legs all the time she ate – it was a very cold day. 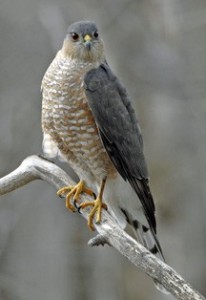 This Sharp-shinned Hawk has bare legs in mild weather.

At a used bookstore I bought an 1893 U.S. Bureau of Biological Survey of “Hawks and Owls of the U.S.” Apparently this survey served as a standard, the final work on the subject, for many years. Food habits of birds of prey were studied by killing thousands of these birds, then examining their stomachs and crops. Unfortunately the balance in favor of birds of prey, as being no good to nature, was overwhelming. The accipiters were labeled as savage, blood thirsty, cold-hearted slaughterers, definitely thought to be detrimental to our society at the time.

Fortunately for our hawks and owls, Wisconsin and most other state laws now protect all of them, including the Great-horned Owl. In my estimation it would be foolhardy ever to change this law so that only certain species of hawks and owls could be killed. I contend that in most cases the only people capable of distinguishing among the various species of these birds are those who would not shoot them anyway.

Please tolerate and protect all birds at your feeders, predators included. Long live the wonderful and valuable accipiters and all of their relatives!