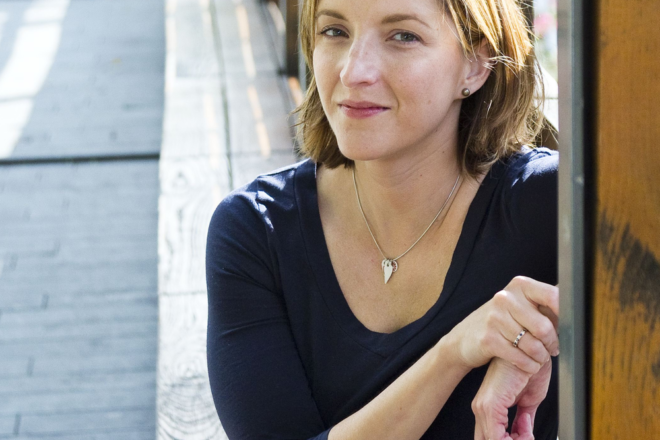 Rebecca Makkai was a finalist for the National Book Award.

Washington Island is the center of Wisconsin’s literary world this weekend. An exceptional group of nationally and internationally acclaimed authors this year who all live and work in the Midwest will be in attendance for the four-day festival, including Jane Hamilton, Rebecca Makkai, Bao Phi, Scott Russell Sanders, Luis Alberto Urrea, and Paula Carter.

The festival will be held on Sept. 19-22 at the Trueblood Performing Art Center and various other special venues on Washington Island. Workshops are sold out, but there is still room at the Saturday main event, featuring a panel discussion and presentations by the authors.

“The writer’s works all support this year’s theme of ‘Generational:  How We Build, Grow and Change,’” said Elizabeth Sachs, co-chair of this year’s festival.

Jane Hamilton’s novels have won literary prizes, been made into films, are international bestsellers and two of them The Book of Ruth and A Map of the World were selections for Oprah’s Book Club.  Her seventh novel, The Excellent Lombards, will be the focus of this year’s presentation.  She will also be teaching a workshop on “Starting With Character.”  Hamilton, who lives in Wisconsin, has taught at the Warren Wilson MFA Program, at Carleton College and at workshops in the United States and Italy.

Rebecca Makkai is the Chicago-based author of The Great Believers, the winner of the ALA Carnegie Medal, one of the New York Times Top Ten Books for 2018 and a finalist for the National Book Award.   Her other novels include The Borrower and The Hundred Year Old House.  Makkai will also teach a workshop entitled  “Ending It All.” She is the recipient of a 2014 National Endowments for the Arts Fellowship and has taught at the Tin House Writer’s Conference,  Iowa Writer’s Workshop and is on the MFA faculty of Northwestern University and Sierra Nevada College.

Children’s Author and Poet Bao Phi is the author of A Different Pond, a picture book, which received a Caldecott honor, an Ezra Jack Keat’s new author honor and the Charlotte Zolotow Award of Excellence in children’s book writing.   He is also the author of two collections of poetry Thousand Star Hotel and Song/Sing, both of which are taught in classrooms throughout the country.  Phi will teach a workshop entitled “A Voice In Poetry.” He was Minnesota Monthly’s Author of the Year in 2017 and City Pages Best Author of 2018.

Scott Russell Sanders is the author of more than 20 books of fiction and nonfiction, including Hunting for Hope and A Conservationist Manifesto.  His most recent book is a collection of eco-science fiction stories, Dancing In Dreamtime. A new edition of his documentary narrative, Stone Country, co-authored with photographer Jeff Wolm, was recently released.  In addition to presenting at the literary festival, he will teach a workshop “Telling A Life Story.”   Among his honors are the Mark Twain Award and fellowships from the Guggenheim Foundation and the National Endowment for the Arts.   He is a distinguished professor emeritus of English at Indiana University.

Hailed by NPR as a “master storyteller with a rock and roll heart,” ‘Luis Alberto Urrea is a prolific and acclaimed writer who is a Pulitzer Prize finalist for nonfiction and a member of the Latino Literature Hall of Fame.  His newest book is The House of Broken Angels, a novel of an American family from Mexico.  Urrea will teach a workshop in addition to presenting at the festival.

A Creative Workshop will be taught on Thursday, September 19, by Paula Carter, author of the flash memoir, No Relation.  She has performed with organizations like The Moth and 2nd Story, where she is a company member.  Her work has appeared in The New York Times, Kenyon Review, TriQuarterly and USA Today.   She teaches at Northwestern University.

The Washington Island Literary Festival also includes workshops on Friday, September 20, presentations on Saturday, September 21 and a brunch with the authors of Sunday, September 22.  Attendees may register for one day or all four days. For more information and to register, go to washingtonislandliteraryfestival.org.