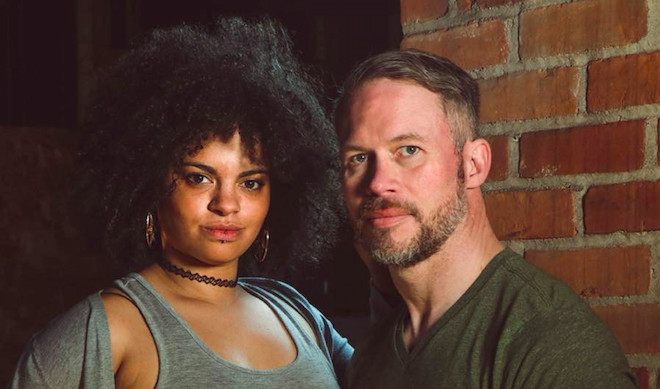 Open Tab’s story is as much about love as it is about music. Love is the common thread that brought the duo together at a bar in 2014. Their chance encounter turned into marriage a year later, with a joint music career to follow.

From Wausau, Carmyn and Nick Hoen perform acoustically, creating their own renditions of popular songs by Johnny Cash to Amy Winehouse to Train and artists in between. They’re known for their prowess in a wide range of genres – breadth that allows them to experiment with lots of songs.

Carmyn’s sultry voice compliments Nick’s guitar playing. She honed her talent by participating in theater and Kids From Wisconsin; he honed his by training and playing in other bands.

The night they met, Carmyn had had a long shift bartending. It was a slow night, so she just wanted to close up and get home when Nick walked in with a friend.

“It came up that I was a singer, and he asked me to sing something,” Carmyn said. “I sang something, and he fell head over heels in love with me right there … That’s not true, but he did get me into his band, and the rest is history.”

Like any other music project, being in a cover band has many freedoms, like hand-selecting a set list, but sometimes you have to give the crowd what it wants. It’s pretty common to hear that voice in the audience yelling, “Freebird!” Sometimes it’s important to take those requests and play recognizable songs that engage a crowd.

Still, the members of Open Tab make an effort to remember what’s important to them as musicians. They choose about a 70-30 ratio of songs they want to play and what they think the audience will enjoy hearing.

Almost every song on their sample set lists is recognizable to the average listener (me, in this case). Carmyn explained that they split the song mix this way because the more they connect as musicians with the songs they’re playing, the better their performances will be.

They’ve begun to sprinkle originals into the mix, too. The melodies of the guitar often inform the lyrics, Carmyn said. So far, most of the original songs have taken a more melancholy tone – they’re sometimes easier to write that way. They hope to record an album someday, but their current focus remains performing as a cover band.

No matter what they play, the mindset they share creates a distinctive dynamic between them. They know each other best, so their music-making and relationship are complementary.

“Nick and I both have always loved music and been drawn to performing and writing our whole lives,” Carmyn said. “We love sharing music with others! I always joke with people that it’s the only thing I’m really good at, but honestly, I couldn’t imagine working as much and as hard as we do for something we’re not passionate about.”

And it can be hard work: Playing music is still a job, and being gone most weekends can be tiring. Plus, they both have “day” jobs: Carmyn as a server at Sconni’s Alehouse and Eatery in Schofield, and Nick as the assistant manager at Jerry’s Music. That’s why the pair likes to make a whole weekend of a show, looking for food they want to try and things they want to see in the towns they visit.

The Hoens have booked 48 shows between the two bands this summer. They’re looking forward to returning to their favorite venues and visiting new communities, and they’re excited to be returning to the Door County Beer Festival in June.

“We can’t wait to be in Door County even more than we were last year,” Carmyn said. “Everyone we met was more than accommodating, and it’s just so fun and vibrant. Even though we’re working, it’s pretty much a vacation when we visit!”