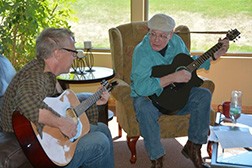 There were 13 musicians and 13 appreciative listeners (including “designated clapper” Frank Christensen) at the second session of the Door County Acoustic Song Circle at the Prince of Peace Coffeehouse in Sturgeon Bay on April 30.

The group will be playing at the Lutheran Church at 1756 Michigan St. regularly from 10 am to noon on Fridays. Actually, it’s a little misleading to label it as a “group,” because membership is fluid, evolving and open to the public.

The average age of the April 30 musicians was “retired,” and the length of musicianship for the 11 guitarists (including one fellow who doubled on harmonica) and one mandolin player ranged from 40 years (the group’s founder, Lloyd Michalsen) to a matter of months.

Michalsen, a lifelong musician, moved to Door County in the early 1960s. A computer consultant who traveled all over the country with his job, he always found his way back to the peninsula. The acoustic song circles he began date to 2008. The original and longest running, year-round song circle meets at Brew Coffeehouse in Ellison Bay from 10 am to noon on Mondays.

When the weather is warmer, an invitation will go out for acoustic players to gather at the Sister Bay gazebo from 6 to 9 pm on Tuesdays.

Michalsen describes song circles as shared music, not performances. Typically, each person in the circle suggests a song to play and/or sing. If it’s familiar to the group, all join in immediately. If not, all eyes are on the fingers of the person playing, picking up the sequence of chords. Sometimes duets are requested, as the sentimental “Waltz Across Texas” rendered on April 30 by Michalsen and Mary Vercauteren. That session ended with a rousing, “On the Bayou” led by “Cajun Ken” Jansonne, who is the owner of Harley II, the camel who is a familiar presence in Door County parades. 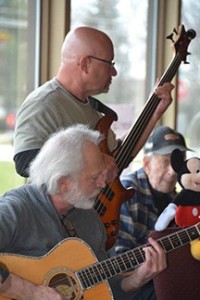 Wherever they play, the song circles soon attract a following. At Brew, a crowd is always waiting for them to arrive at 10 am on Mondays. People, including many tourists, often listen once, then return the next week with their own guitars. The circles have also led to the formation of two new bands, Last Man Standing and Smitty and the Micks.

Another opportunity for older adult musicians in Door County is Peninsula New Horizons Band, a group led by classical guitarist Christy Christensen, who plays with the Brew and Prince of Peace song circles. It’s a chance for those who played years ago to brush up on their skills or learn a new instrument and to participate in performances.

On Flag Day, the band will ride on a float in the Forestville parade, and they’ll also be part of Baileys Harbor’s July 4th parade. The group meets from 6 to 9 pm at Bay View Lutheran Church, 340 W. Maple St. in Sturgeon Bay.

For more information, call Christensen at 920.559.7844 or find the Peninsula New Horizons Band on Facebook.