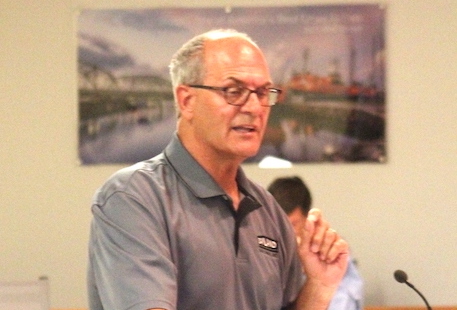 A 10,000-square-foot addition on the north side of Midwest Wire at 615 S. Lansing Ave. in Sturgeon Bay was approved June 27 by the city’s Aesthetic Design and Site Plan Review Board.

Dave Phillips of Bayland Buildings, who presented the project plans to the board on behalf of Midwest Wire, said the 20-foot-high addition is being constructed to provide much-needed storage space and match the existing metal building.

Phillips said the north side of the addition will include a wainscot at the base.

“I’ve done this on a few of our buildings,” he said. “It dresses it up, we think. [Midwest Wire wasn’t] excited about it. It added costs and money, but I said, ‘You know, coming before the board here tonight, we’re going to have to do something to help improve it.’”

Phillips said the existing parking lot on the building’s east side won’t need to be changed, other than a five-foot-wide strip about 65 feet long being cut out to put in service doors and work around the building during construction, before being filled back in when the work is done.

“We’re adding two driveways on the west side for the one loading door, at-grade door, and then we have a loading dock exactly next to the one that’s there now,” he said.

Phillips said the addition will include a 10-foot-by-10-foot office for the person in charge of shipping.

“That’s really all that’s in the addition other than storage,” he said.

“This takes care of their needs for now,” he said.

Christopher Sullivan-Robinson, city planner/zoning administrator, said the construction of a four-foot-by-12-foot metal awning planned for the project by the existing entryway off Lansing Avenue requires a variance from the Zoning Board of Appeals because it would encroach on the setback off that street.

“We talk about door and window canopies [in the city’s guidelines] as an encouraging design element to entryways,” he said.

Phillips said the awning would help to indicate where the building’s front door is located and keep people out of the rain.