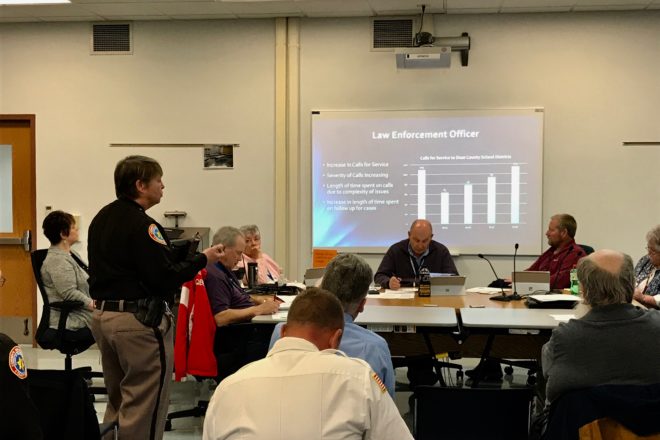 At its monthly meeting on April 9, the Door County Administrative Committee gave enthusiastic approval to a proposal from Door County Sheriff Tammy Sternard for the addition of three School Resource Officers (SROs) to serve full time at Gibraltar, Sevastopol and Southern Door schools.

The committee first heard from Tim Mulrain, assistant principal and dean of students at Gibraltar High School; and Patti Vickman, superintendent of the Southern Door School District, both of whom talked about the need for an SRO in their schools.

Mulrain said the biggest concern for Gibraltar is its relative isolation and response time for law enforcement. Having an officer on the campus would help to build relationships among law enforcement, students and the community.

Vickman reiterated those statements, adding that society and schools have changed since she and the committee members went to school.

“In today’s society, kids are dealing with issues we didn’t deal with growing up,” she said, adding that those issues are affecting some children’s ability to learn. “We need to meet all of their needs, not just their academic needs.”

Sternard said the three schools have already approved a three-year contract for SROs. Currently, she said, a part-time officer walks through the schools about four times a month.

“It’s what we could afford to do at the time,” she said.

The SRO, she explained, walks a balance between prevention and enforcement. She said in addition to responding to threats in a timely manner, they can help reduce the number of youths entering the criminal-justice system by understanding situations and context.

Door County District Attorney Colleen Nordin was also there to advocate for the program and expanded on the idea that an SRO is in a unique position to keep kids out of the system – or, if need be, bring them into the system.

“One of the benefits, when there’s an incident that occurs and I get a referral from Human Services or get a call from the SRO, that officer has a unique perspective on that student and what might have led up to [the situation] to help me make a determination of whether the child should be brought into the system or something less formal.”

She mentioned that Sturgeon Bay High School has an SRO in place through city police, and in one instance her office acted more swiftly and firmly with the student based on the SRO’s knowledge.

“Ongoing behavior kept escalating – something I wouldn’t know, nor would the deputy who responded to a particular incident,” Nordin said. “But the SRO gave a full picture that was alarming.”

Sternard said that after talking with active SROs in the region, she’s learned that their work is 95 percent proactive and 5 percent reactive.

“They are not there to arrest children, but if a student’s behavior justifies criminal arrest, our officers will be in school anyway,” she said. “It’s about building relationships, getting to know the kids.”

The work of the SRO, Sternard said, includes being an informal counselor, educator and then a law-enforcement officer. They receive special training in dealing with youth and mental-health issues.

The contract worked out with the schools has the schools covering 80 percent of the SROs’ cost, with the sheriff’s department covering the rest. They would work Monday through Friday during school hours and would also be required to attend a variety of extracurricular activities, for which they would receive comp time rather than overtime pay. When school is not in session, they would pick up duties where needed within the department.

Asked by committee chair Dave Lienau when the three SROs would be trained, Sternard said the three officers could go through training this summer and be ready for duty in September. She said the cost for training is $3,500, and she is working on grants to pay for that.

Committee member Susan Kohout said when she taught at Sevastopol School, there was a school liaison officer who made a huge difference by having a presence in the school.

Sternard said an SRO is the same thing. The name has simply been changed.

Lienau asked where the three officers would come from, and Sternard responded that a selection process and interviews were held that included the school administrators and experienced SROs.

“We chose our three officers,” she said, adding that they are three senior officers who would be replaced with three new officers at the low end of the pay scale.

Committee member Dan Austad asked if the officers would need vehicles, and county administrator Ken Pabich responded that the county had a number of vehicles that were going for trade-in, but three were kept for the SROs.

“We’re trying to do this as cost-effectively as possible,” Pabich said, adding that much of that has been achieved through Sternard’s leadership of her department.

“I’ve researched this for five years,” Sternard said. “To my mind, it is the best thing for our community. It’s based on everybody’s buy-in. It’s a proven program that works in many communities.”

In other matters before the committee:

• Pabich said since the last meeting when the committee discussed what to do about the county EMS service, he has talked with Rep. Joel Kitchens and the Wisconsin Department of Health Services and learned that there are other options for the county to consider in the level of service provided and its cost. He said he would like to have more discussions with Door County Emergency Services Director Aaron LeClair about those options before taking any other action.

• Corporation Counsel Grant Thomas brought up a 2017 change in the state statutes [a change initiated by the Pulse and completed by Rep. Joel Kitchens] regarding the publication of legal notices in newspapers. Previously, the Door County Advocate was the only qualified newspaper due to an outdated restriction that did not allow free newspapers, such as the Pulse, to publish legal notices. Thomas said the change now allows either the Pulse or the Advocate to publish the notices. The decision of where to publish is up to the individual in each municipality who has the responsibility for legal-notice publication, Thomas said. He added that there has long been “a myth or legend” that the Advocate was named the official newspaper of the county, but research could not find that designation ever being made.

• Thomas said he is negotiating with the Wisconsin Humane Society Door County Campus on a new way to compensate the organization for serving as the county’s “dog pound” (the official term in state statutes). In the past, the county has contributed $10,000 for the shelter’s utility fees, out-of-pocket expenses for whatever situation arises and a few thousand annually from dog licensing fees. The new agreement is looking at paying $30 a day for impounded animals. “We do need to have this service in Door County,” he said. “They’re the only game in town, and they’re willing to cooperate with us.”