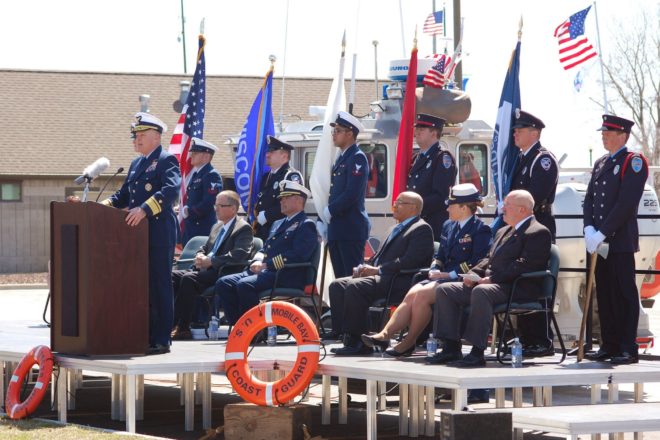 Then-Rear Admiral Fred Midgette, senior commander for all Coast Guard operations throughout the Great Lakes and Saint Lawrence Seaway, was one of the speakers at the May 10, 2014, Coast Guard City celebration at Sawyer Park. Midgette has since retired at the rank of vice admiral. Photo by Jim Lundstrom.

Nancy Hutchinson, the organizer of Adopt-a-Soldier Door County, could not stand by and watch as political games in Washington, D.C., prevent members of the U.S. Coast Guard from getting paid.

“We’re going to try to help these Coast Guard guys and gals. There are a few of them with both the wife and husband working for the Coast Guard, so now they have no income,” she said. “They don’t expect something like this to ever happen. You have a job, you get a paycheck. Putting aside all the political beliefs people may have,. I know there are more than 800,000 employees not getting paid. This is going to ruin peoples’ credit, and I don’t think the government cares about it at all. They don’t.”

Among the 800,000 federal employees not receiving paychecks during the impasse over President Trump’s border wall are 50,000 members of the U.S. Coast Guard, 362 of whom are stationed in Wisconsin.

The Coast Guard is the only branch of military service affected by the shutdown because it operates as an arm of the U.S. Department of Homeland Security rather than the Department of Defense. Of those 50,000 people, 42,000 are required to report to work because they are deemed essential.

“In terms of what we’re doing, we’re continuing with our critical missions, search and rescue, law enforcement, national security, responding to oil or chemical spills if we need to, and making sure our waterways are safe and secure. In that sense, the public won’t see any difference in what we do,” said Master Chief Petty Officer Alan Haraf, a Chicago-based communication specialist for Coast Guard District 9, which is responsible for the Great Lakes.

Haraf said there could be some things affected by the shutdown, such as routine maintenance for aids to navigation, administrative functions and public outreach, but he added, “For the most part, the things where the public will see us out and about – ice rescues, cold water rescues – aren’t affected.”

Even though the shutdown took effect on Dec. 22, Coast Guard members did receive a paycheck at the end of December when Homeland Security officials were able to cover about $75 million needed for the Dec. 31 pay period.

“Our next paycheck is mid-January. We’ll see what happens there,” Haraf said. “It will affect people differently depending on rank and whether they have a family. In the meantime, we’re reporting for duty and doing what we need to do.”

Hutchinson said the Tee It Up for the Troops fundraiser held at Horseshoe Bay Golf Club last July raised $20,000 that was going to be used as a loan program for Door and Kewaunee county veterans in need.

“But the applicants have been coming in slow,” she said. “We decided to take that money, and we’re going to help the local Coast Guard. We’ve got some other funds available to us, other donations that we’ve invested. We’re going to work with them and see what we can do to help them. We’re not going to hand them cash. They’ll get a loan, and we’ll pay their bills for them – rent or car payment or whatever they need paid. The only situation where they will get cash, we’ll probably get them gift cards for groceries. They need to eat. Personal hygiene items and things like that.”

“Randy Nesbitt [of Pinkert] is offering $10,000,” Hutchinson said. “Others are offering funds if we need it. As Arleigh Porter said, the government doesn’t have the Coast Guard’s back, where we do.”

Anyone else want to contribute, Hutchinson said you can contact her via the website, adoptasoldierdoorcounty, or call her at 414.333.6648.

“If anybody wants to donate monetarily, we thought of doing it a couple of ways,” she said. “If you want to consider it a loan and be paid back, write on the memo section, ‘For the Coast Guard.’ Or put on the memo, ‘Adopt a soldier,’ and after we help the Coast Guard, we’ll put that money to help local veterans or for care packages that we send to troops.”

The Military Times reported that Sen. John Thune, R-S.D., introduced the Pay Our Coast Guard Act. Seven other senators have signed on, and it is expected the legislation will be fast-tracked.