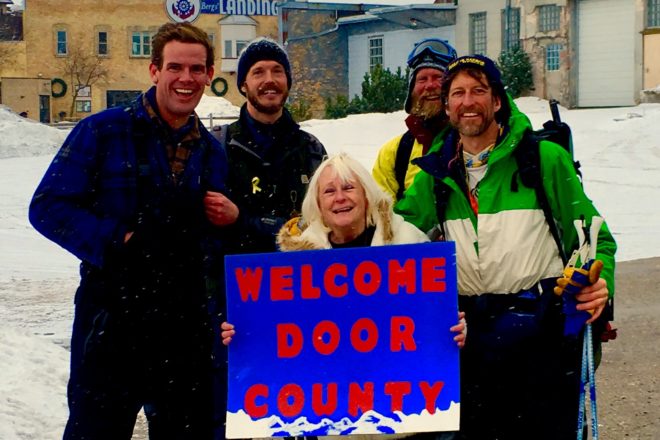 It’s not every day that you see a group of men walking across Green Bay, but a few perplexed fishermen, a smattering of wildlife, and a passionate welcoming party witnessed just that Feb. 17 when a quartet of Door County adventurers completed a 15-mile march across Green Bay on the ice.

The trek began at 7 am in Egg Harbor and ended at 3:15 pm in Menominee, Mich.

Ryan Heise, Door County resident and Village of Egg Harbor Administrator, said with heavy breaths – having just completed the journey, “While we share no land boundaries, we are united by water. We want Menominee and surrounding counties to know that Door County stands with them in their opposition to the proposed Back Forty Mine project. This walk was to raise awareness of the long-term threats to water quality and cultural heritage that the proposed Back Forty Mine has the potential to bring. People, especially my friends back in Door County, should educate themselves about it, and I think they will quickly realize what kind of legacy open-pit metallic sulfide mining has left throughout the country. Should they want to consider a contribution to the opposition of the proposed Back Forty Mine, it’s easy:  Go to jointherivercoalition.org and contribute to the efforts to stop the mine.”

The “Adventurers With a Cause” said the trip was long, but generally safe. The first obstacle was discovered a few hundred yards offshore in Egg Harbor:  a pressure crack with open water, which was navigated with caution.

The group said that shipping channel was the real wildcard; but with no cutting activity for the last few weeks, combined with low temperatures, they were pleased to find jagged chunks of ice frozen firmly into place.

Whiteout conditions were experienced three-quarters of the way through the trip. Fellow adventurer Jeff Lutsey said, “While we could see one another, as exhaustion led us in slightly separate directions, we lost all points of reference on land to keep us heading straight. That’s when the compasses and an old GPS unit made their debut. There was some moderate zigzagging going on; GPS tracked a 17-mile trip.”

Walking conditions were equated to walking on a sand beach. “Thought I was in shape; I guess not,” Heise said with a smile and a wink with a frozen eyelash.

The final obstacle was the pressure crack on the Menominee side.

Heise said, “A really nice guy named Scott Lindquist, and his dog, came out to show us safe passage.”

Jeff Budish (“Budda”), a member of the Coalition to SAVE the Menominee River, Inc. and accomplished fishing guide, could be seen racing out in his truck to be among the first to welcome the exhausted hikers.

“I’ve been talking to Budda all week about the local ice conditions and the mine,” Heise said. “It was great to finally meet him, and we were both excited that we were able to execute the plan as intended.”

Others on the Menominee side braved the ice, including a mother/daughter combination on ice skates (Regina and Gracey Chaltry), to provide hugs and warm greetings.

The welcoming party, led by Dale Burie and his wife Lea Jane, was electric and greeted the group with open arms. Thirty to 40 people showed their support, and a “Welcome Door County” sign was particularly admired by the red-faced Door County residents who were present.

A group of women from the Menominee Nation shuffled cautiously onto the ice and sang a “Water Song,” with tears rolling down a few cold faces.

Chris Olson, a member of the Door County adventurers, said, “That moment was profound. This mine is a real threat to the Menominee Nation’s heritage, culture and way of life.”

“Mission accomplished,” said Bob Bultman, a Door County geologist and member of the adventurers. “When we saw the group of supporters, all pain and discomfort disappeared.”

“Humbling” and “magical” were words used to describe the reception held at Murray’s Irish Pub in Menominee, by the Coalition to SAVE the Menominee River, Inc. and the Menominee Nation.