This female Calico Pennant Dragonfly has a flight period of late May to early August. All photos by Roy Lukes.

I’ve had groups of people hiking with me in years past when quite suddenly a “flock” of dragonflies, usually the Common Green Darners, proceeded to execute spirals, loops, zigzags, stalls and other amazing aeronautical maneuvers in their insect-capturing or territory-defending ventures. Not wishing to degrade human beings, I decided to keep most of my thoughts to myself. How light and carefree and exhilarating the dragonflies appeared to be. How heavy, plodding and restricted we people happened to be.

Nearly everyone in the group instinctively ducked when one of the little spitfires zipped near our heads. I was quick to comfort the people into realizing that these marvelous fliers with wings of netted “gauze” had no stingers with which to pierce us nor mouthparts capable of biting us. Don’t worry about one of them flying into you because their eyesight is just short of phenomenal.

The head resembles half of a glassy marble partly hollowed out. At rest the insect can move its head as it scans the landscape, perhaps for a flying insect whose movements it can detect from as far away as 50 feet.

Surely one of the most marvelous features of the more than 330 species of dragonflies in North America are the large bulging compound eyes. As many as 10,000 to 20,000 or more individual hexagonal-shaped facets, like tiny dimples, are separate visual units connected to their own nerve endings. The belief is that a rather coarse-grained picture is seen by the insect. However, they are extremely efficient at detecting even the slightest movement that resembles its prey, such as a mosquito or black fly.

I learned the hard way how unusual it is to find a Common Blue Darner that measures four inches or longer from the front of the head to the tip of its abdomen. Herb Wisner, teacher of insects and pond life at the National Audubon Camp in northwestern Wisconsin, where I was a student a few times in past years, offered a prize of five candy bars to the first person to capture a dragonfly measuring four or more inches in length.

Stubborn Bohemian that I am, I accepted the challenge, checked out an insect net and spent nearly an entire Sunday afternoon (our free time) chasing down, capturing and measuring dragonflies. Among the several dozen I snared, the largest was three and three-quarter inches long, disappointing to say the least.

The very next morning a sleepy-eyed retired Boy Scout leader from St. Louis was on his way to the toilet building to shave. He looked down at the dew-laden grass, admired a large sparkling dragonfly, too wet to fly, and tucked it carefully into his toilet kit. Later he measured it, found it to be four and one-quarter inches long, and calmly collected the five candy bars!

The astounding wings of some species contain as many as 3,000 tiny-celled windows. Several sets of muscles on the inside of the thorax enable this great flier to beat its wings at least 28 times or more a second, attaining short bursts of speed up to 60 mph. Strangely this same creature is incapable of locomotion on the ground.

Having a broad attachment to the body prevents folding of the wings against the abdomen, as can be done by its relatives the damselflies. Four wings, all moving simultaneously, make for quite a maneuverable flight. Motion of the wings alternates: when the front ones are down, the rear ones are up. A small basket is formed by the spiny legs, thereby enabling this amazing insect to capture its prey in flight, then transferring it to its mouth for consumption. 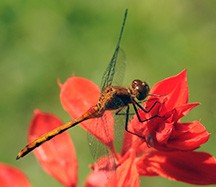 The Cherry-faced Meadowhawk is flying from early July to early October and can be found near marshes, small ponds and streams.

How totally different the nymph is from the adult. Following the mating ritual the adults frequently remain united as they fly over the surface of the pond. Now and then they drop to the water allowing the female to lay her eggs. Some species simply let their eggs fall, while others insert them into the water, or thrust them into the outer tissue of aquatic plant stems.

One sunny, warm day as we were about to get out of our car in a large parking lot we noticed a pair of dragonflies connected and flying together. The female was ready to lay eggs and they flew over a dark shiny car time after time as if depositing the eggs. To her it probably appeared that the car surface was a small pond.

Within a week the eggs of some dragonflies will hatch and the nymphs will emerge. These voracious creatures become entirely carnivorous, may spend from two to four years in this aquatic stage undergoing about a dozen molts.

Finally on a sunny July or August day the nymph crawls out of the water, usually onto a plant stem. Its tough outer skeleton (exoskeleton) splits down the back and gradually the adult emerges. The body and especially the wings must dry completely before the little “spitfire” takes to the air. This gauzy-winged beauty will mate and spend its short whirlwind life, several weeks at most, doing its important job of controlling mosquito and black fly populations safely and without cost to humans.

These “dangerous” creatures, which were said in past years to sew up naughty little boys’ ears, are in reality, to be ranked with the very beneficial insects so plentiful in the world today.

From a nymph in the mud to an adult in the air, in a sense, like a minnow miraculously changing into a chickadee! No further growth will be experienced as an adult, simply one of the world’s mightiest insect fliers with an insatiable appetite, an aerial acrobat in the summer sun.

The Wisconsin Dragonfly Society will hold its annual meeting on July 11 at the new Cook-Albert Fuller Center in Baileys Harbor. It will start with a 9 am meeting, followed by a presentation by Paul Burton of Ephraim on the Hine’s Emerald Dragonfly. Field trips are planned for Saturday and Sunday. There is a $5 fee for Ridges members and a $10 fee for non-members. Email the society to pre-register at [email protected]. For more information, visit wiatri.net/inventory/odonata/WDS/ or find the Wisconsin Dragonfly Society on Facebook.