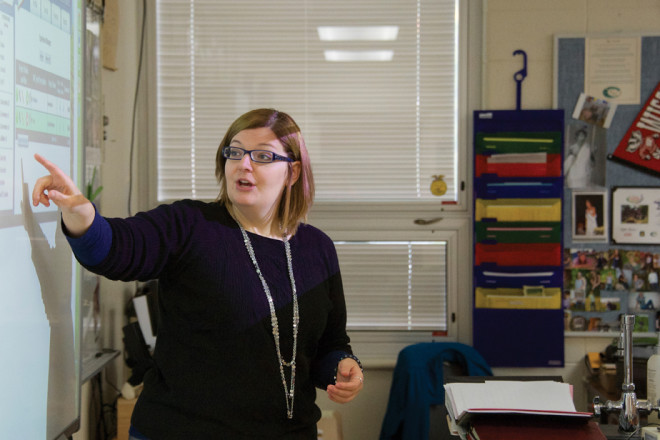 Theoretically speaking, Jeanna James is not only the best young agriscience teacher in Wisconsin, but also one of the top six in the United States. However, anyone who watches her working with students might well maintain that the designation is not theoretical.

“Jeanna is a model teacher and keeps every student at the center of what she does,” Southern Door principal Steve Bousley noted. “This recognition is a testament to her tenacity in being the best she can be each and every day.”

James graduated from the University of Wisconsin – River Falls in 2008, accepted an appointment at Southern Door School, and has since been teaching classes that include high school Animal Science, Horticulture, Veterinary Science, Wildlife Management, and Leaders for the Future, along with eighth-grade Agriscience. She is also adviser for the school’s Future Farmers of America (FFA) club.

“Last year I was nominated by ag teachers in northeastern Wisconsin to apply for the Wisconsin Association of Agricultural Educators (WAAE) Outstanding Young Member recognition,” she explained. Instructors with six or less years of experience are eligible for consideration.

She won the state award, automatically advancing to the National Association of Agricultural Educators (NAAE) competition. The WAAE recognized her achievement at the state conference this past June. 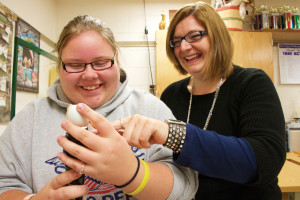 The NAAE is divided into six regions, each with a winner. James was chosen for division three, an area that includes Minnesota, Iowa, Nebraska, North and South Dakota, and Wisconsin. Now among the top six, she has reached the pinnacle of the competition.

In her application for the award, James explained her teaching philosophy, gave examples of effective classroom instruction, showed how she incorporates experiential learning, listed student successes within the national FFA organization, described partnerships formed within the community, provided details about marketing her program, and offered evidence of her own professional growth.

James grew up on a southwestern Wisconsin farm where she began showing hogs and steers at the Layfette County Fair, first through her 4-H club and then as a student member of the Darlington High School FFA.

After her graduation she served as vice-president of the state FFA, part of a team that conducted workshops and leadership conferences for high school FFA students, in addition to public relations work, meeting with politicians and school boards.

“That year sealed the deal,” she said. “This is what I want to do to achieve and succeed in this goal in life – to guide them [high school students] into making choices. It was a life-changing year, one of the best things I ever did!”

And now she is 100 percent certain that she made the right choice to become a teacher.

James sums up her teaching philosophy with the statement, “You get what you give.” She has high expectations for herself, and to meet them, knows she must put in time and effort. To her students, she “leads by example.”

While she prides herself on preparing students in communication, collaboration, critical thinking, and creativity for whatever futures they may choose, she encourages them to pursue agricultural-related careers because those occupations are “vast, growing and expanding, and in high demand.”

But she also prides herself in her own preparation. During the summer of 2013 she completed the prestigious National Agriscience Teacher Ambassador Academy in Maryland, one of 48 selected from among 250 applicants. Sponsored by the DuPont Corporation, the session offered a 50-plus hour week of professional development that was devoted to the inclusion of inquiry-based learning in instructional programs. She shared the techniques that she learned with other ag teachers during both the National FFA Convention and the NAAE Conference in 2013 and with the WAAE membership at their Professional Development Conference this 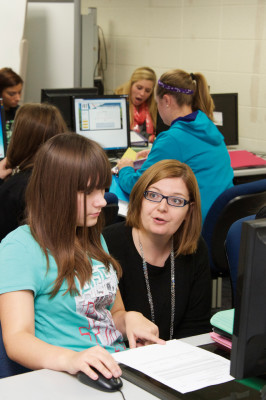 Her expertise has resulted in the success of four young men who, under her direction, were State Wildlife Career Development winners, offering tangible evidence of her “get what you give” philosophy.

She has given students more opportunities for achievement this year, offering three new classes that bring with them equivalent science, allowing her students to meet state Department of Public Instruction graduation requirements through her coursework.

“I like working in a rural school district,” she said. While many of her students may not live on farms, that is “the setting where they grew up.” And she enjoys the opportunity that the area offers to pursue her interest in hunting pheasants.

She finds herself arriving at school early and enjoys talking with her students informally. “I know I made the right career choice” to teach here, she said, “because I can’t answer the question, ‘What would I be doing if I weren’t doing this?’”

Reflecting on the Outstanding Young Member award from the NAAE, she said, “I am humbled to have reached the level that I have.”

The application, she continued, “was looked at by peers who were not in region three, and based on their reading, they selected me. Their opinion matters because they are my peers and because they know what the job entails.”

Because of her relative youth, James still might be mistaken for a newbie. But those who know her are excited not only by what she has already accomplished but also by her potential.

“I believe Jeanna is an outstanding educator,” Bousley said. “I am looking forward to being a part of her future growth and always welcome her next idea.”