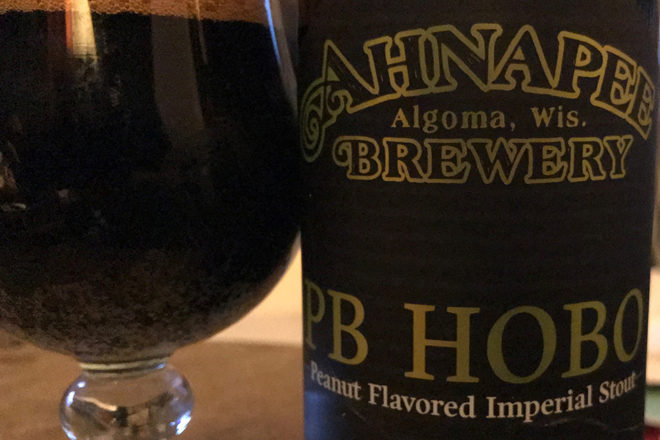 Quite a while ago I gave up eating carb-heavy things such as bread and feel much better for it. However, when I tasted Ahnapee Brewing Company’s latest iteration of its annual, early May Hobo release – which this year is called PB Hobo, a peanut-flavored imperial stout – I longed for an accompanying slice of Wonder bread slathered with strawberry jelly. It would be the perfect companion to PB Hobo.

PB Hobo was released May 4. I had my first taste on May 5.

Ahnapee owner/brewmaster Nick Calaway is one of my favorite brewers, and PB Hobo is just another example of why.

Silky, silky, smooth darkness is how the journey begins. And then a massive chocolate tsunami washes over you, followed by an incredible, undeniable peanutiness.

It’s a big drink of peace and love and peanut butter. That’s why the jelly sandwich would complete it.

I’ve tasted several peanut-butter beers in the past, and, you know, I’m a peanut butter fan. Calaway is a master stylist, and he has completely captured the flavor of peanut and set it down in the middle of an imperial stout.

And that is an amazing thing.

And now for something completely different. It was not many moons ago when Berliner Weisse was a much-rumored but rarely seen beer. When I finally got a taste of a true Berliner Weisse from Berlin, I was in love with its tart, dry effervescence. It was so stupendously different from any other beer I’d ever tasted.

But that was in another century when the craft beer evolution/revolution was still in its infancy. Today it’s easy to find Berliner Weisse-style beers, and one I recently found is an interesting example of the style.

Collective Arts Brewing of Hamilton, Canada, is the maker of Berliner-Style Ale Brewed with Lime & Ginger. Yes, that is an exceptionally long name for this very tasty and refreshing beer. The word “style” must be added because the name Berliner Weisse is protected in Berlin.

The ginger is subtle, offering a warm counterpoint to the tartness of the style, which is enhanced by the final, tart bark of lime at the finish.

This beer is 4.4 percent alcohol, which is actually on the higher end of this style. Some are as low as 2.5 percent. The color is very light – a slightly hazy straw color. The original style was reportedly dubbed by Napoleon’s troops in the 1800s as the “Champagne of the north.”

In Germany, Berliner Weisse’s tartness is tamed by what is known as “schuss,” or a shot, of syrup, either red (raspberry) or green (wintergreen). As with this offering from Collective Arts, North American brewers of Berliner Weisse often introduce the fruits and/or flavors into the brewing process.

But a straight-up, tart BW is OK with me, too.

Although this particular beer has added flavors, they do not overwhelm the enticing tartness. Collective Arts has yet to let me down with its beers.