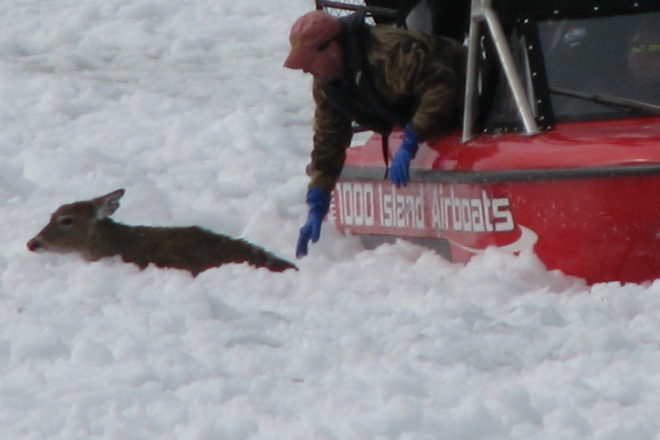 Dave Harris has been a deer hunter all his life, but on Jan. 9 he was called on to rescue a deer that was stuck in ice about a mile offshore in Little Harbor, just north of the quarry on Bay Shore Drive.

Harris, a resident of Fish Creek and Chambers Island, is co-owner of 1000 Island Airboats, a company that specializes in cold-water rescue boats. Department of Natural Resources Warden Mike Neal contacted him for help.

“The DNR has one of our boats and keeps it at the Gibraltar Fire Station, but it was in for service, so Mike Neal contacted me,” Harris said. “We had one up here. We do a lot of testing and demonstrations in Sturgeon Bay. We’ve got so many good ice conditions between the bay, lake and canal. We like to show we can run on ice, break through ice and traverse on open water.”

Harris retrieved the boat from Egg Harbor and took it to the quarry boat launch.

“It was about a mile of bad ice and water,” he said. “We got to the deer and figured out a game plan. Those guys were great.”

The guys he refers to are Neal, who, while off duty, spearheaded the effort, along with two other wardens, Jordan Resop and Josh Voelker.

“The deer was halfway through the ice. Its hindquarters were below the ice. It was trapped,” Harris said. “We were able to get it out and into the boat. Obviously, a deer is not happy to be lassoed into a boat. And a doe is really, really strong. We used an Army blanket to kind of calm it down. We put it over its head and got it to shore. We were able to get her out of the boat without hurting her. She kind of rolled around on her back, got on her feet, got her footing, looked back at us and flew across the road into the woods. It was nice we were able to do this. It was really satisfying.”

Harris partnered with the Rogers family – Pete, Fawn, Ryan and Nick of Appleton and Chambers Island – to buy the Canadian airboat company about 18 months ago and moved production from Canada to Marion, Wis.

“Seventy-five percent of our sales are to emergency-response teams and about 25 percent to people who live on islands and want to get there safely, no matter what the conditions,” Harris said. “The Brown County Sheriff’s Department has one of our boats, and they used it to rescue 14 people from the ice a few weeks ago.”