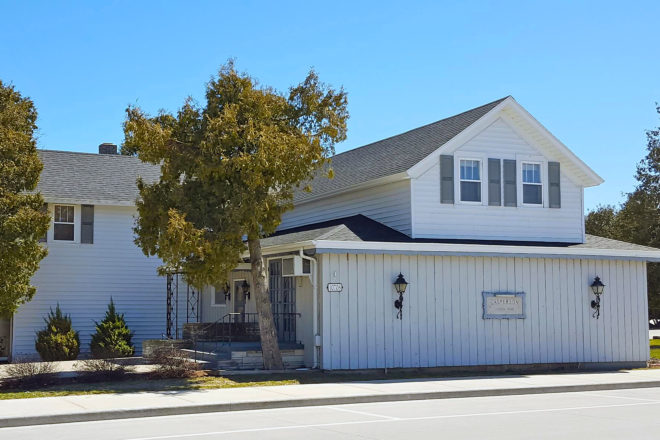 The two-acre Casperson property has been in the same family since 1921. Submitted.

The property includes a little more than two acres of land north of Al Johnson’s, and it has been the subject of much speculation in Sister Bay for years as the village’s downtown has evolved. At the end of 2018, the Casperson family sold its funeral-home business to Huehns Funeral Home, but that sale did not include the property. Earlier this year, the Caspersons approached the Village of Sister Bay with a draft proposal for a condominium and shopping development that the plan commission did not receive with enthusiasm.

Greg Casperson said it will take a little getting used to driving through the village and not seeing the family business in the center of town, but he’s thrilled to sell to a neighbor.

“I’m happy that the Johnson family bought it,” he said. “They’ll do a nice job with it and build something good for them and for the community.”

In a joint statement, Lars, Rolf and Annika Johnson thanked their longtime neighbors for three generations of service to the community and said, “Sometimes things happen for a reason.”

“Our family has been a good friend to all three generations that have successfully operated Casperson Funeral Home, and our two businesses have happily co-existed as neighbors since the start of Al Johnson’s Swedish Restaurant in 1949,” read the statement.

The Johnsons said they don’t have firm post-purchase plans for the property, but Lars Johnson said any development would continue with architecture and scale similar to what the family has created at the restaurant and surrounding grounds.

“We’ll make decisions in line with what the community wants and what we’ve always done,” Johnson said. “We’re not condo developers.”

Johnson said they would lean toward what village guidance for the commercial district is, which would be some type of small-to-medium-scale lodging with retail.

Greg Casperson thanked the community for supporting his family’s business since 1921.

“It has been our privilege to serve this tight-knit community for over 98 years, and we know the Johnson family will do many positive things for Sister Bay with our former property in the years to come,” he said.

Huehns Funeral Home will continue to have an office at the Casperson property until it finds a new location in Sister Bay.