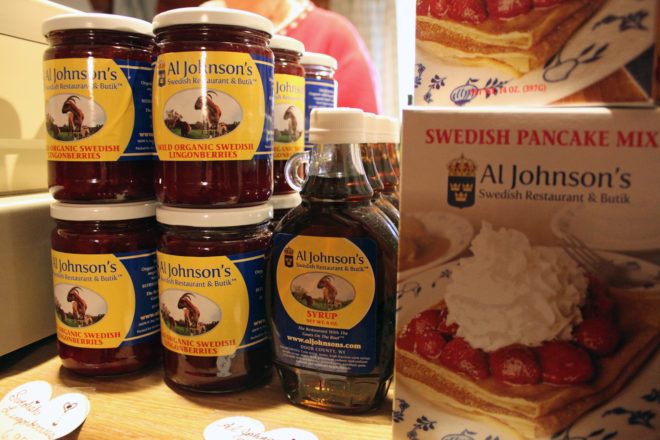 At a trade show in San Francisco a few years ago, Al Johnson’s kitchen manager Freddie Bexell saw plenty of Scandinavian producers and distributors that he recognized. He was a bit surprised to find they recognized him too.

“We were trying to find distribution companies and there were other Scandinavian companies there that are selling lingonberries and they are now recognizing us,” said Bexell, a native Swede. “It’s a small market, but still, they know who we are.”

While you can find Al Johnson’s pancake mix, lingonberries and other products online or at the Butik in Sister Bay, you can also find them in more than 400 grocery stores across Wisconsin, Minnesota and Illinois. With the construction of a new warehouse behind the restaurant, that number is only going to grow.

“We want someone to be able to successfully make an Al’s Swedish pancake at home,” said Kit Butz, sales and marketing manager for the company. “We are adding distribution now but with that we need to have lots of storage.”

The warehouse allows Al’s to bring in more authentic Scandinavian goods and provide space to store the products Al Johnson’s makes in house to export across the country.

“The goal was to be able to keep staff year round even if we’re not super busy in the restaurant,” said Bexell. “You have your own production, out promoting the products, selling the product. We have grown quite a bit in the past two years.”

But the move also made business sense. Butz said he has a seen a decline in authentic Scandinavian goods coming into the United States the past few years and Al Johnson’s was in a position to provide that link across the pond.

“It’s stuff that we already use in house,” said Bexell. “We sell it here, we use it in the restaurant, but there’s more to it. Anything that we sell outside is the cherry on top of the sundae because these are the products that we need here anyway.”

Al Johnson’s has sold their homemade products on Amazon for years and that has provided them with the data to expand intelligently. Each online sale provides them with a snapshot of where else in the country people are buying Al’s products.

“We’d love to get something more on the street than just online,” said Butz. “Now it’s just logistics about getting it to where it needs to go inexpensively.”

Bexell sees a lot of shipments throughout California and in Denver. While they don’t really know why these are hotspots for lingonberries and Swedish pancake mix, they can use online sales data to find distributors on the ground in those areas.

Back home in Sister Bay, expansion of Stabbur will mean bathroom, storage, electricity and water to the beer garden.

“We literally had a panel out there and we ran extension cords for the panels out there all year for the coolers and everything,” said Bexell about the bar’s opening last summer. “It was a challenge but it was fun.”

This year, Stabbur will feature a Friday fish fry along with live music and Bexell hopes to expand the food menu depending on staffing levels. While Stabbur isn’t equipped with a full kitchen, Bexell added the power, water and gas during construction this year to open the door for further expansion in years to come.