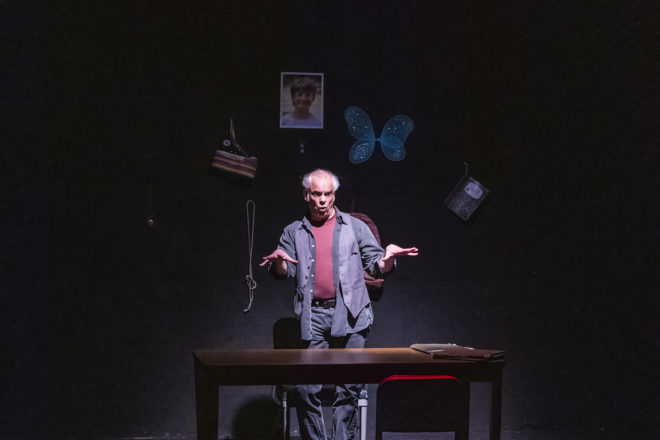 Alan Kopischke in the TAP production of James Lecesne’s ”The Absolute Brightness of Leonard Pelkey.” Photo by Len Villano.

Currently on stage at Sturgeon Bay’s Third Avenue Playhouse (TAP) is a production with nine characters ranging from the lead character – a hard-boiled detective – to an awkward, 16-year-old girl to the force-of-nature owner of the Hair Today Salon to a German clock repairer to the British owner of a school for dance and theater to a teenaged bully to a mobster’s widow.

Amazingly and artfully, one actor plays all these roles in James Lecesne’s The Absolute Brightness of Leonard Pelkey – plus two more, neither of which is Leonard Pelkey. Alan Kopischke rehearsed just a bit more than two weeks for the show, directed by Robert Boles, but he spent a very long time before that working on lines and characterization.

This is not Kopischke’s first one-person show. Twice in the past, he’s done Jacob Marley’s Christmas Carol at TAP, written by Peninsula Players Theatre’s perennial actor/director Tom Mula and also directed by Boles.

“A one-person show is a daunting responsibility,” Kopischke said. “So much of theater is interacting with other people. In a production like this one, you eventually get to play with the audience, but for a long time it was just Bob and me.

“You’re responsible for the whole story and all the characters. It’s such a big mountain to climb, but a really fun challenge when you have material like this, characters you fall in love with and an exciting story line that’s compelling to tell. Yes, it’s fun, but it’s a lot of hard work.

“I wasn’t aware of this play, but Bob found it and said, ‘You have to do this!’ And when I read it, I immediately agreed.”

The play is set in a small town on the New Jersey shore, 10 years after the disappearance of 14-year-old Leonard Pelkey. As the investigation into the disappearance of the gay boy continues, the people whose lives he touched forever remember – as the New York Times theater critic said of the first production in 2015 – “their admiration for his tenacious and optimistic belief in being true to himself in a world that was often hostile and ultimately fatal.”

The show runs for 75 minutes without an intermission. Kopischke never leaves the stage or changes anything about his appearance except his glasses. Switching from one character to another is indicated, Kopischke said, “by changes in voice, posture and attitude.”

The New York Times reviewer of that original production said, “A show about the brutal murder of a 14-year-old boy should not, logically speaking, leave you beaming with joy. And yet that’s the paradoxical effect of The Absolute Brightness of Leonard Pelkey. It’s an uplifting, life-affirming play about how a town changes because of one gay kid who bravely disrupts its deadly sameness by being true to himself.”

Kopischke, interviewed after the first performance at TAP, agreed. “Absolutely, he said. “It was heartwarming to talk afterward with people who said that, although they shed some tears, they enjoyed themselves so much. The characters are delightful, and the show is full of delightful moments. It is so funny and so human.”

Last year, the Milwaukee Journal Sentinel rated Third Avenue Playhouse, 239 N. Third Ave., as one of the top-10 professional theaters in Wisconsin. Kopischke was a member of Peninsula Players’ acting company for many years, then joined the staff as its development director, in charge of developing and producing The Big Read Door County and The Play’s the Thing play-reading series.

The many theater companies where he has performed include the American Conservatory Theater, Milwaukee Rep, Theater Z, Steppenwolf and regional theaters nationwide. He’s currently the executive director of the Door County Kinetic Arts Festival, coming to Björklunden for its fourth season on June 9. He also teaches acting at UW-Green Bay and St. Norbert College.

The Absolute Brightness of Leonard Pelkey runs through June 9, with performances Wednesday through Saturday, 7:30 pm; and Sunday, 2 pm, with talk-backs following the Sunday matinees. For more information about tickets ($30 per adult, $12 per student) or other details, visit thirdavenueplayhouse.com or call 920.743.1760.