The oft-described “quaint” Village of Ephraim faced its third wet referendum in its 163-year history in the April 5 election, and voters overwhelmingly opted to end the community’s dry status.

Hugh Mulliken, the Ephraim business owner who started the petition drive for the referendum, said on the day after the successful campaign that he expects the village to be issuing licenses for the coming season.

“The summer season will be here before you know it and it was a pretty decisive vote – 2 to 1 for wine,” Mulliken said. 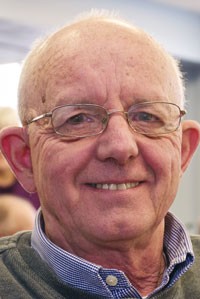 The referendum consisted of two questions. The first gave approval for the village to issue Class B licenses that allows for on or off sale of malted beverages. Voters approved that 127 to 98. The second question was for approval of Class C licenses, which would allow the sale of wine on premise. It also allows the carry-out of partially consumed bottles of wine purchased on site. That vote was 152 in favor and 73 against.

“I’m surprised there was such a difference between the wine and beer and I don’t know how to attribute that unless people are concerned about carry-out. I don’t really think that’s an issue,” Mulliken said. “I think if you look at this a year from now, I’m thinking of Summer Kitchen or Joe Jo’s Pizza or Chef’s Hat, they’ll probably all have been serving beer and wine, and, frankly, I don’t think you’ll notice a difference in the village, except for one thing. People have called me and said, ‘We’ll come to Ephraim for dinner now.’ People have asked me out for a glass of wine.”

The question of ending the alcohol ban that had been in place since the founding of the village by 19th century anti-alcohol Moravians had come up twice in the past. A 1932 referendum failed 78 to 54 and a 1992 effort failed 141 to 50.

What made the difference this time?

“We were organized,” Mulliken said. “I didn’t even know about the 1990s vote. It wasn’t on my radar. I was here. I think when we were having the petition signed, a lot of the families with deep roots in the village just commonly said, ‘It’s about time.’ That’s probably what swayed it. You’d be surprised how many Ephraim fathers were very much in favor of it.”

Mulliken and his wife, Alicia, own The Lodgings at Pioneer Lane in Ephraim, but the couple lives in Liberty Grove, where Mulliken had another victory running unopposed as an incumbent member of the Liberty Grove Town Board.

Mulliken pooh-poohs the idea that this referendum will change the quiet village.

“I’d just like to reiterate, I’ve lived here 50-plus years,” Mulliken said. “I have no desire for Ephraim to change in any way. I just don’t think this will impact negatively in any way on the village.”