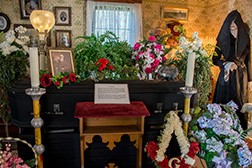 The funeral setup in the parlor, part of Alexander Noble House’s 2015 exhibit, “A House In Mourning.”

“The silent and grim reaper, Death, has again invaded our ranks and another of the craft has been summoned to that shore from whose bourne no traveller ever returns.”

So began the memorial and resolutions on Alexander Noble, written by Willard E. Gaede of the Henry S. Baird Masonic Lodge, just 14 days after one of Fish Creek’s founding fathers passed away.

This season, the Alexander Noble House will pay tribute to the life and death of the prominent Fish Creek resident Alexander Noble with its current exhibit, “A House In Mourning.” It will take visitors back in time to the funeral of one of the community’s founders, who passed away Sept. 29, 1905.

The clocks have been stopped at his time of death, the mirrors have been covered, and the house has been cloaked in black in representation of the all-out affair of a Victorian Era funeral.

Docents will lead visitors through a house in mourning, which will include a funeral setup in the deceased’s parlor, as was custom in the early 20th century, along with the curious presence of tear bottles, hair wreaths, cooling beds and mourning timelines from an era when death was everywhere.

Funerals of the 19th (and early 20th) century were akin to weddings of today: elaborate affairs in which no expense was spared. It all came about following the 1861 death of Prince Consort Albert, whose widow, Queen Victoria, plunged into a deep mourning from which she never recovered. 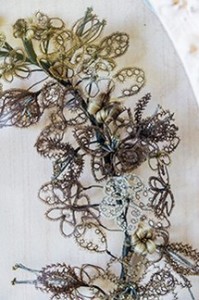 A Victorian Era hair wreath, made of string, wire, wood and the hair of the deceased.

Mourners were required to purchase new black clothing for each funeral they attended or risk looking disrespectful, and mourning periods for family members of the deceased were highly structured and regulated (for those with short memory, household manuals and etiquette books spelled out the appropriate manner and length of mourning). Funerals and burial arrangements became much more elaborate, and people went to great lengths to ensure they showed proper respect for the dead.

“That all happened when Prince Albert died … it became a thing where if you didn’t spend all the money on the funeral, you weren’t serving justice to that person. You weren’t respectful,” explained Laurie Buske, coordinator for the Gibraltar Historical Association. “So people would spend tons of money on a funeral.”

At a time when infant mortality rates often led parents not to name their children until they survived their first year, death was surprisingly fashionable. Cameo broaches and gold lockets holding photos of the deceased ensured they were never far from thought and if you weren’t able to capture a photo of the person living, you propped them up and took a photo when they were dead.

There were also the cooling beds and blood bottles used to prepare the bodies for burial (after a two-day “watch period” to ensure that the individual was, in fact, deceased), and the smaller tear bottles for mourners to catch and save the tears they shed for their loved ones.

Of all the curious elements of the exhibit, Buske finds the Mourning Hair Wreaths to be most odd. These memorial wreaths were constructed of string, wire, wood and, yes, human hair.

“They took the hair of the deceased and they would make a flower. They would add it to this wreath and this is how they kept their loved ones near,” Buske said. “They’re absolutely gorgeous and you would never know they were made of hair.”

It is worth note that these wreaths did not just pay tribute to one deceased person, but all of the deceased loved ones of the individual who created the wreath.

As Buske points out, many of the 19th century funeral customs have evolved to represent current customs of expressing or recognizing grief, like the tradition of the calling cards, which now are represented as sympathy cards.

Not to mention the use of flowers which, back in the day, served as a mask for the odor of death and now purely serve as decoration. 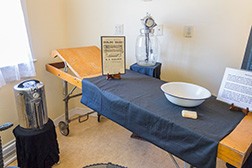 A cooling bed and blood bottle at the Alexander Noble House in Fish Creek, part of their 2015 exhibit, “A House In Mourning.”

Visitors and docents to the Alexander Noble House have long shared photos of apparitions and other creepy happenings of the home. Is there any concern over more strange happenings given the ghoulish subject of the exhibit?

“I’m worried that it will be a little more interesting than in the past, yes,” Buske laughed.

Tours for “A House In Mourning” will run from Tuesday through Sunday, 10am – 3pm, June through October. The Alexander Noble House is located at 4167 Main St. in Fish Creek. For more information, call 920.868.2091, email [email protected] or visit HistoricNobleHouse.org.