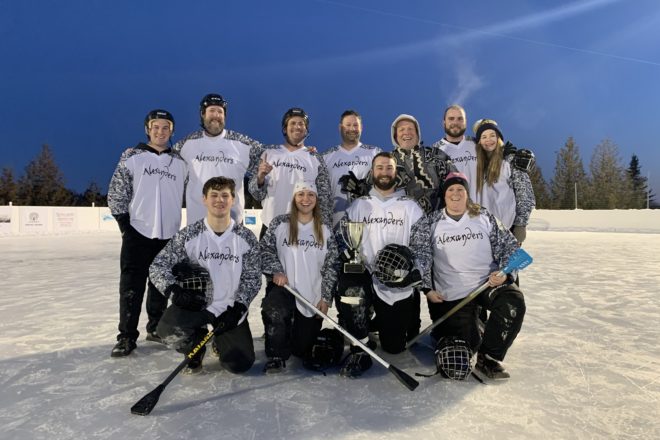 Johnson’s Park kept it close, but it couldn’t put any shots on net against Alexander’s during the Feb. 16 championship game of the Northern Door Broomball League playoffs. Alexander’s held the Park scoreless in a 2-0 victory, hoisting the Hilander Cup once again.

In round one, Husby’s lost to e-Tailer, and JJ’s squeaked past Door County Brewing Co. In the semifinal round, Johnson’s Park outlasted a tough challenge from e-Tailer, while Alexander’s topped an exhausted JJ’s squad.

The ice rink at the Sister Bay Sports Complex will remain open for skating, pickup hockey and broomball as long as the weather permits. To get updated ice conditions, follow the Teresa K. Hilander Community Ice Rink on Facebook. Skates, sticks and broomball equipment are all available for rent at the warming house.

Haven’t seen broomball for yourself? Watch it below in a video from Peninsula Filmworks.