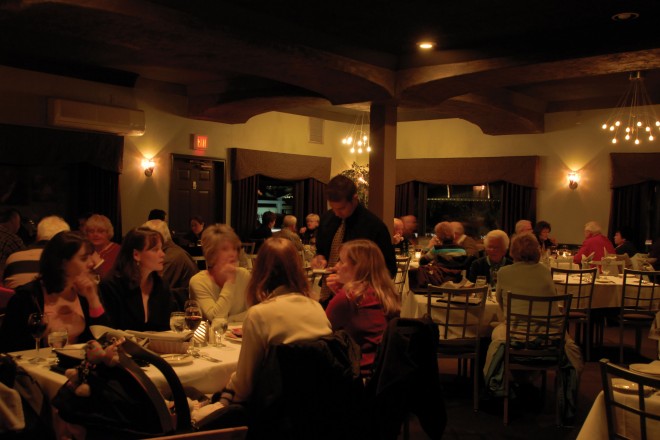 The Hotel Du Nord, a beautiful establishment overlooking the Little Sister Islands, was once home to a restaurant well known for its delicious dinners. While the hotel is no longer there, lucky for us the restaurant lives on. Alexander’s, under the guidance of Bruce Alexander for the last 20 years, now has a new home north of Fish Creek on Highway 42.

Bruce started coming to Door County in the mid-1970s and made the permanent move in 1979. In 1985 Bruce took over the kitchen of the hotel and he has been in business ever since. He worked with several owners and managers before finally leasing the restaurant in 2000, at which time he officially changed the name to Alexander’s. When a developer bought the property in 2005, Bruce knew it was time to put the long-time plan of starting his own place into action.

Bruce and his wife Jill, a Door County native from Baileys Harbor, looked into several different options as far away as Green Bay, but in the end the former Park Way Supper Club (or “The Rock,” as it was historically known) seemed to offer the best opportunity for the couple.

Though there is still a sentimental attachment to the previous building and location, Bruce and Jill are thrilled to have a place to finally call their own. “I miss the water,” says Jill, “…and the fireplace. We have a lot of memories of that place but now we have the opportunity to do things our way.”

On the upside of the move is the increased space, especially behind the scenes. “The traffic flow in the kitchen is definitely better,” says Bruce. “There is a lot more room and it’s easier to maneuver.” Bruce operates both his restaurant and his catering business out of the kitchen so the extra room gives the chefs more freedom.

Although Bruce has been in the restaurant business for more than 20 years, there were definite challenges in opening an existing restaurant in a new location. “There are no books for me to look back on,” explains Bruce. “I didn’t know what kind of revenue there would be in the new space.” As well as a larger kitchen area, Alexander’s went from seating about 80 to being able to seat 160 people. More diners meant more staff, and Bruce and Jill had to double the number of employees from 20 to 40.

On a personal level, the challenges of the move were compounded by a growing family. During the winter of 2005 Jill was pregnant with the couple’s second child. “Trying to get ready for a new baby, keeping up with our daughter, Sophia, and trying to get a new restaurant open was without doubt the toughest thing we’ve ever done,” says Jill. Second daughter Chloe was born in January and the reincarnation of Alexander’s opened soon after on May 24, 2006.

Being able to build off of his long-standing reputation afforded Bruce the chance to improve on his menu and make some changes during the transition. The menu has scaled back on the number of offerings to focus on seafood, steaks and chops. There is a nice balance of specialty, Italian and poultry offerings as well. The starter menu has all of the Alexander’s favorites which can combine to make a delicious tapas-style meal.

“I find that there is a gap between traditional supper club fare and fine dining,” claims Bruce. “I want to improve on that.” Improve he does with a great selection of entrées such as cherry barbequed salmon, grilled chicken asiago ravioli and sesame tuna. There are also several nightly specials and, of course, no visit would be complete without Bruce’s famous crostini bread.

There is a large, full service bar with a friendly staff, a spacious dining room, and additional porch seating in the warmer months. Jill had help from local business Sister Bay Trading when deciding on the décor for the restaurant. There is a modern feel with steel chairs, contemporary fixtures and a subdued color palate.

One important aspect of Bruce and Jill’s life in the restaurant business is their focus on the local community. Bruce estimates that he does about 20 fundraising dinners annually either through his catering business or in house. The Peninsula Preschool’s annual “Trivia Night” is held at the restaurant each fall as well as events for the Peninsula Music Festival. The Alexanders have even hosted Gibraltar’s High School Prom. “Bruce and Jill will bend over backwards to make sure your event is perfect,” says Jaime Blossom, president of the Peninsula Preschool Board of Directors. “They really care about their community and are always willing to do what they can to help.”

Alexander’s catering business has become an entity of its own. Bruce does events all year long ranging from large (30 persons or more) catered dinners in private homes to 200 person weddings all over the peninsula. Over the past few years, in fact, Bruce’s catering has come to make up almost one quarter of his business.

The menu for catered events differs from the restaurant menu. Bruce will work with the client to tailor a specific list of options for any event. Anything from individual tenderloin sandwiches to sushi can make up a personalized menu. Bruce’s in-house staff can function in either the restaurant or at an on-site event. Delicious food along with capable wait staff and bartenders are available to make any catered affair memorable.

Change is something that those of us who live in Door County have gotten used to; it is inevitable and constant, for better or for worse. And though many of us have fond memories of the Hotel Du Nord and what it used to be, Bruce and Jill Alexander have made a positive impact on Door County’s dining scene and have made a difference in their community. Change, in this case, is a pleasant experience.