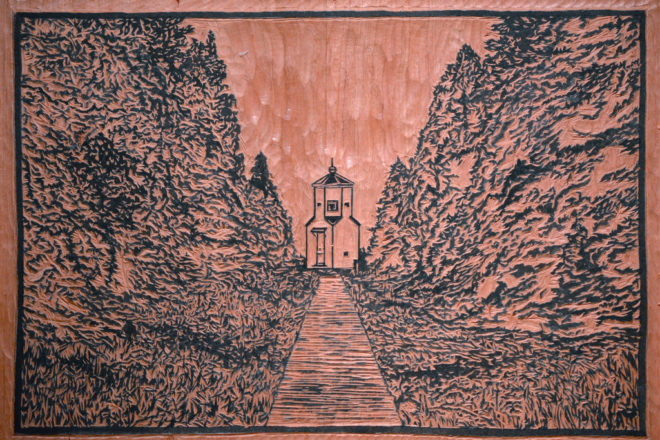 Some people believe there are no coincidences in life but artist Alfred Stark would surely disagree. In 2002, seven years after completing a degree in painting and drawing from Northern Illinois University, he became interested in woodblock printing. He found several books on the topic at the DeKalb, Illinois library and thought the name of one of the authors seemed vaguely familiar. When he checked the file of customers in the hardware store where he works, he discovered that she was a woman he had waited on many times.

What he didn’t know then was that Helen Merritt was the top scholar on Japanese woodblock printing in the world and that she had studied with Un’ichi Hiratsuka, one of Alfred’s idols, along with Shikō Munakata. Although his skill in woodblock printing is mainly self-taught, Alfred says the hints he received from Merritt were “what really got me going.” 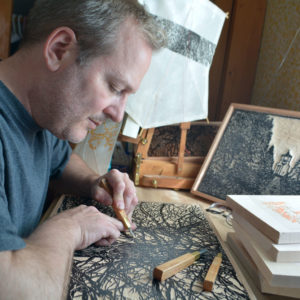 Childhood hikes with his dad taught Alfred to love nature. Both his parents encouraged his talent for drawing – facilitated by the outdated maps brought home by his dad, a draftsman for the local electric company, so his son could sketch on the blank side. The interest in woodblock printing developed when Alfred was looking for a way to decorate the Japanese kites he made after college. He became interested in Japanese style and since kites and woodblock printing both have a centuries-long history in Japan, it was natural for him to combine the two.

His work also combines the Japanese and Western styles in woodblock printmaking. His use of oil-based ink, rather than water-based, comes from the Western tradition while his method of producing the print follows the Japanese style. The Western style of printing requires a large press. The Japanese method, which Alfred uses, employs a disk baren – a small, handheld device that is rubbed over a sheet of thin, moistened paper to make a print from the inked woodblock. The block itself is produced by drawing the design on paper, gluing it to a block of wood, and carving through the paper into the wood. The paper is rubbed off, the block is washed and then, Alfred says, “You’re ready to go – spreading ink onto the block with a hard rubber brayer (similar to a small paint roller) and transferring the design to paper.”

One of the skills Merritt taught Alfred was to make his own rice paste/glue by boiling and straining sushi rice until only goo is left. (“Actually,” he says, “Elmer’s works just as well.”) He creates the blocks with traditional Japanese carving tools – all handwork. He views the blocks themselves as art objects and sometimes sells one as a piece of art in its own right. 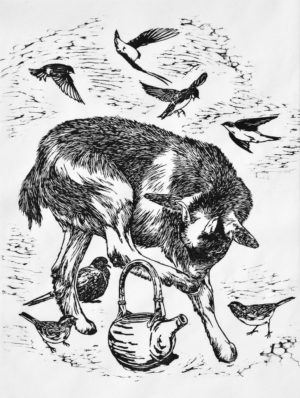 “The Adoration” design by Alfred Stark.

He began producing woodblock prints in 2002 and selling them about five years later. He says that he likes the hands-on aspect and the mix of drawing and carving. He also likes the black-and-white format because “it pares the subject down to its essential beauty.”

Most of his subjects are drawn from photographs – pictures he takes on nature hikes with his wife Elinore, who paints, draws and does photography.

“I have to have a personal connection with a subject,” Alfred says. “It would be unusual for me to take on a project that someone requested if I didn’t have strong feelings about it.” (He has a special fondness for owls.)

Door County is one of his favorite hiking places. He began camping with his family in Peninsula State Park when he was a small boy and later spent time with his grandparents, Paul and Rosemary Dieter, visiting their cousins, the Wilmer Anschutz family on Kangaroo Lake, and after 1995, at the Dieters’ own home on the lake.

One of his early shows was at The Flying Pig in Algoma in 2011. In March he had a successful exhibit at The Ridges. He now has pieces at Woodwalk Gallery, where he’ll be a featured artist in the gallery’s Exhibit II: A Walk In the Woods. A reception will be held July 7 from 4:30 – 7 pm, an evening combined with music by George Sawyn and Lori Wier. Woodwalk is the first Door County gallery to carry Alfred’s work.

Both Kate LeRoy and Ann Anderson purchased prints at the March show at The Ridges. LeRoy, The Ridges’ visitor services manager, bought a print titled “The Merganser.” 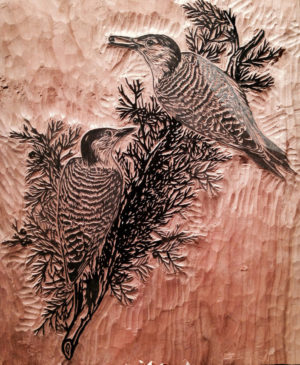 “Alfred has done amazing prints of The Ridges, including orchids and the range lights,” she says. “They fit nicely into our artists’ series here, and visitors really enjoy them.”

Anderson discovered Alfred’s prints and blocks at The Flying Pig several years ago and added a print, “The Bald Eagle,” from The Ridges’ show to her growing collection.

“I really like the older Japanese process he uses,” she says. “His drawings are so realistic and I love the monochromatic color scheme.”