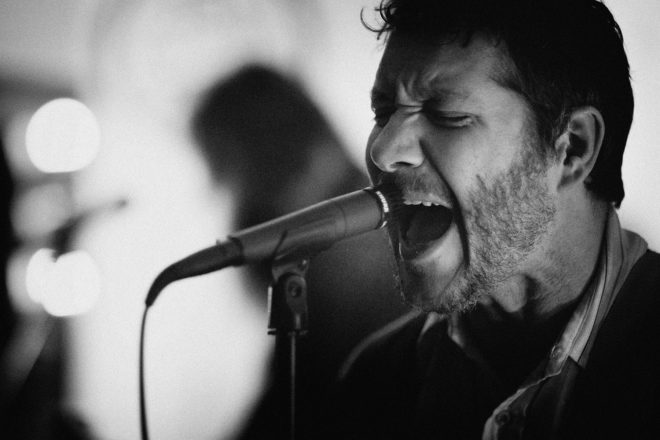 Don’t think that late-night punk shows exist on the peninsula? Well, perhaps not often, but now you can find such a thing in Algoma as part of its First Friday art nights.

Members of local rock bands Ben Luten and Hue Blanc’s Joyless Ones present the Winter Malaise Showcase as an extension of the Friday-night entertainment scene. Their biggest motivation is to expose new ears to new music.

Josh Schwader, a member of Hue Blanc’s Joyless Ones, broke down the format of the showcase ahead of its next performance on March 6, featuring the Long Line Riders.

The showcase begins and ends with performances by the two hosting bands starting at 10 pm. Then the main, touring act begins its sets around 11 pm, with live music going into the early hours of the morning.

The showcase is also a way to reinvigorate the musical energy of the musicians who are now dads and have jobs, but who used to tour all over the country. The late-night logistics come out of that energy, but the organizers also didn’t want to take away from the crowds at the open mics hosted by Steele Street Hops on Fridays.

Though the showcase is a new avenue for performance in Algoma, the connections among the artists formed during the ’90s. There was a collective, musical mindset among them that developed from listening to their parents’ records growing up, Schwader said.

“Growing up in the country in Kewaunee County with five channels and no cable, it was difficult to hear anything that was new and exciting and going on other than what was on the radio,” Schwader said, “which wasn’t super appealing to us at the time.”

“Then Nirvana came like this lightning bolt out of the blue and kind of woke us all up to the fact that there’s new music being made right now,” he said.

That’s when Schwader and other like-minded individuals became interested in modern rock music and started congregating. Tom Smith at the Exclusive Company in Green Bay was largely responsible for organizing them. He booked all of the shows at the Concert Cafe, which was the best all-ages punk venue during the ’90s, Schwader said.

A couple of bands formed out of Algoma during that time, played shows at the cafe and met other groups from around Green Bay and the state.

“We just kind of organically grew into this beautiful, eclectic group of musicians,” Schwader said.

Now these bands are reconnecting through the showcase. Schwader and other local band members are thrilled to have something close to home that their friends and families can attend. They’ve slowed down on performing after having kids, so eliminating a long drive is helpful.

Aside from its convenience, the locale also allows touring musicians to visit the area, and the hosting bands are able to give the guests a larger cut of the proceeds.

“Say what you will about Algoma, and there is plenty, but we do know how to host a touring band,” Schwader said. “It’s a fun little city.”

A couple of bands have performed in the showcase already and have been showing up early to check out the art galleries and try some of the local eats. Experiencing life in Algoma is what keeps drawing them back.

“They’re not just showing up, playing their set and collecting their money and leaving,” Schwader said.

As far as genres, the featured music isn’t just punk. There’s rock, honky- tonk and even a jazz artist. It was an understanding among the organizers to feature an array of genres, and they pick bands they like.

“This is Algoma. We’re trying our darnedest to bring some culture to the people,” Schwader said.

The Winter Malaise Showcase is booked until April, with performances by the Long Line Riders and IV. Summers tend to be busy for Schwader and his bandmates, so they plan to take a break and reboot the showcase in the fall.

According to a Long Line Riders press release, the group is a “classic country and honky-tonk roundup from Milwaukee featuring members of The Midwest Beat, Goodnight Loving, Head on Electric and Space Raft.” According to its Facebook page, it plays “honest, familiar songs about unrequited love, loss, life and the open road thawed out and interpreted through a Midwestern lens.”

The next two shows will be at the Algoma Pizza Bowl instead of the previous venue, Ape’s Bar & Grill.