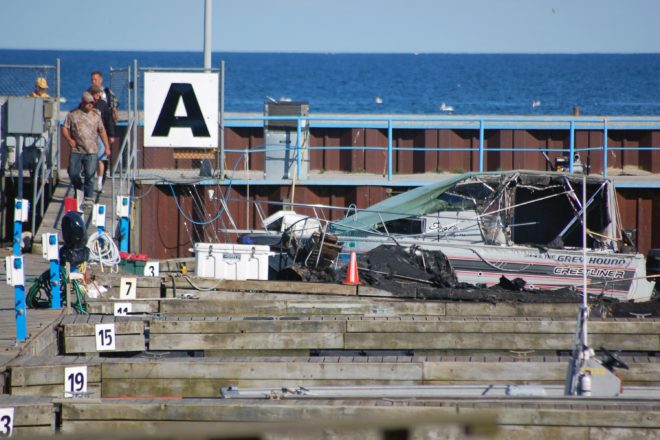 Investigators are still trying to determine the cause of a fire that burned five boats at the Algoma Marina last week.

“We don’t have anything yet on what might have been the cause,” said city administrator Jeff Wiswell on June 29. “We have five boats that were principally affected and some others with burns, should we say not terminal. But we had more than 50 other boats in fantastic shape. We’re pretty lucky that we got through what could have been a really bad situation.”

The fire was reported to the Algoma Fire Department just before midnight on Wednesday, June 22. Four of the five boats belonged to charter company Kinn’s Sport Fishing.

Due to gas and oil spillage, the marina and adjacent Crescent Beach were closed immediately after the fire. The beach reopened on Saturday and the marina was finally cleaned up and reopened on Sunday.

Wiswell said the city is trying to determine the cost of the fire through lost launch fees, lost sales and lost gasoline.