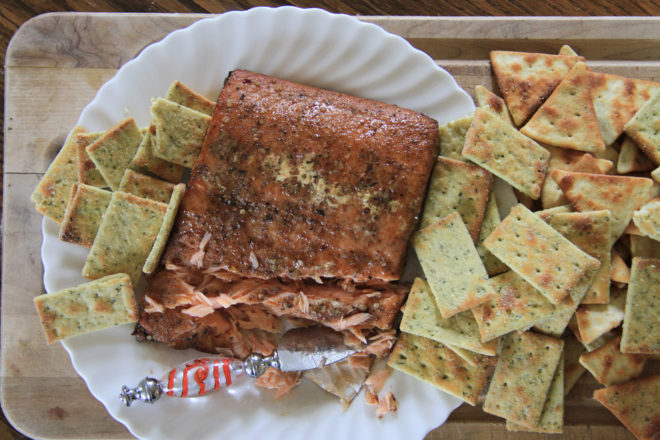 Algoma, a lakeside city roughly 20 miles south of Sturgeon Bay, is where the Ahnapee River runs into Lake Michigan. The area serves as an access point for plenty of avid anglers, and the port is known as one of the greatest on the Great Lakes for sport fishing. In fact, Algoma is home to many Wisconsin state-record fish.

Going hand in hand with the legendary fishing is a legendary fish house called Bearcat’s. If you strike up a conversation with an Algoma local or frequent visitor, Bearcat’s is likely to come up as a must-visit establishment. The fish house specializes in smoked fish and seafood products and has become widely recognized, largely through word-of-mouth recommendations.

“When I first started working here, I had no idea how popular this small, little hole-in-the-wall shop was,” said Bearcat’s manager, Mike Gordon. “It’s all word of mouth: People all over the country find out about it from a friend or family who visited once, and we ship all over.”

I, too, had first heard of Bearcat’s through conversation, first from an  Ahnapee Brewery patron and then from a loyal fan posting about the smoked whitefish dip on Instagram. You really have to hear the name “Bearcat’s Fish House” only once or twice to remember it – it has a stickiness to it.

The name comes from the original owner’s nickname. Bearcat and his wife, Linda, started the smoked-fish business in 1986 and ran it themselves. They established the location at 295 4th St. in Algoma in 1997, which allowed them to expand their retail products and to add more food purveyors, including Seaquist Orchards, Marchant’s Meat, Maplewood Meats, Country Ovens and more. Bearcat and Linda retired about seven years ago, transferring ownership to Billy and Nicole Smith.

Locals make up the core of the frequent in-store customers, but online sales have been steadily growing since the online shop was launched about a year ago.

“We’ve been shipping for about two years,” said Billy Smith, “and have focused on growing our online sales for the last year or so. We ship to a lot of people who grew up here, or visited here, and now live somewhere else and want that taste of home. We have been shipping mainly to Milwaukee, Chicago and Minnesota, and then also Florida and California.”

When you visit the fish house, you’ll find two large display coolers with fresh and smoked fish. During my visit, there were fresh fillets of perch, walleye, trout, whitefish and salmon. “We always have fresh salmon,” said staff member Katrina Ritchie. “That’s the most consistent. The rest we rotate out based on what’s available. We get fresh fish delivered twice a week.” Whatever isn’t sold quickly gets vacuum sealed and frozen for sale in the freezer.

The walls are lined with freezers that offer a truly astounding selection of seafood. Some caught my eye as ready-to-cook meals: the salmon pinwheels (in lobster, spinach and feta, and seafood flavors); garlic-butter stuffed snails; yellowfin tuna cubes for poke; and Alaskan salmon burgers. Then there are the frozen varieties of more exotic fish and seafood: octopus, swordfish, arctic char, Chilean sea bass, mako shark – and the list goes on. And of course, chest freezers hold the seafood favorites: plenty of sizes and varieties of shrimp, scallops, lobster and crab legs.

In yet another refrigerator you’ll find grab-and-go items such as Bearcat’s popular smoked-fish spreads and pickled herring. “If we don’t keep that stocked, we have some loyal customers who would be upset,” Ritchie said.

Pickled herring is a traditional Nordic staple, commonly eaten as a snack with rye bread, dill and onion. I couldn’t bring myself to try it and instead picked out two spreads – smoked whitefish with cream cheese and a mesquite version – to sample over the weekend. They were delicious on pretzels and crackers, and they added a smoky essence to a bagel sandwich.

Among the smoked-fish options – all brined and smoked in-house – was a variety of smoked salmon and trout flavors, along with a rare specialty: whole smoked Lake Winnipeg cisco. I had to ask how you eat these whole smoked fish. “You just peel back the skin and go for the meat!” Ritchie said.

I took home a Tuscan garlic smoked salmon, which is a close second in popularity behind the brown sugar, but it’s a Bearcat’s original. In 2018, when the company that made the Tuscan spice went out of business, Billy Smith vowed to find a reliable replacement. A good substitute was eventually found, and it went back on the menu in January.

“If I ever have any leftovers – which doesn’t happen often – I eat it the next day with my scrambled eggs,” Gordon said. I didn’t get to try that because my dinner guests and I didn’t allow the fillet to last for long. The salmon was smoked perfectly, and the seasoning was a delicious blend of savory Italian spices. The edges of the fillet were crispy and oily – an addictive snack that easily becomes your dinner.

Outside of the excellent array of fish and seafood, the shop is also available to those who want their own catches cleaned, filleted, frozen or smoked. As you can imagine, it has become a hub for area fisherfolk, especially during the peak summer months.

The shop has proven to be a contagious craving that will certainly have you passing along the Bearcat’s name to the next peninsula visitor. The fish house is open seven days a week, and fans can shop online at bearcatsfish.com.