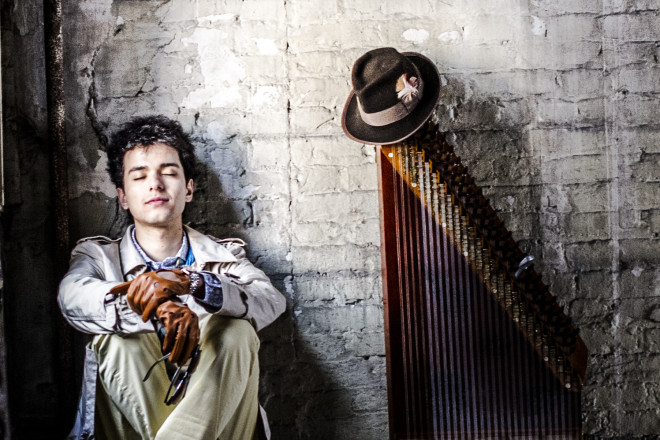 Life was not easy for a boy growing up in Ramallah, engulfed by the ongoing Palestinian-Israeli conflict. Young Ali Amr, rather than playing outside with other children, was often confined to his home with no recourse for occupying himself other than practicing his qanun, the sounds of battle providing a percussive background to the music that he made.

Ali, who had begun learning the classic traditional Arabic instrument when he was five, by age 12 made his professional debut on the 72-string qanun, and now, at age 24 performs as Ali Paris, regarded as one of the foremost classical qanunists on the national stage.

“Once I was not allowed outside my home for 60 days during the Palestinian Second Intifada (uprising),” he recalled. “There was nothing else to do, the sounds of guns finishing the melody while I played.

“Very few qanuns are played in the U.S.,” he continued. And Paris, who is not only an accomplished performer on his instrument, is also a talented vocalist and composer. He combines the classic sound with American keyboard, string and percussion to create a fusion of Arabic and contemporary music, a unique blend, sometimes labeled world music.

The qanun is a flat stringed instrument with a narrow trapezoidal soundboard that is supported in the player’s lap or on a stand, and reminiscent of the American traditional folk instrument, the zither, but with a different timbre.

Paris is a 2013 graduate of Boston’s Berklee College of Music, after completing studies in 2007 at the Lutheran High School of Hope and Music in Ramallah, and in 2008, the Edward Said National Conservatory of Music, also in Ramallah. Presently his goal is a master’s degree at William Paterson University.

During this musical journey he earned Marcel Khalife Competition Awards, National Heritage Awards as Music Performer of the year, Berklee Outstanding Ability Award, the Medici Musica Production Emerging Artists Award, as well as other recognition for his talent.

Ali Paris now sees himself as a cultural ambassador with music as a universal means of communication. He tries to present “a positive message through a life journey” to his audiences, encouraging them to “be grateful for the lives they have.” Despite the length of his 18-month struggle as a Palestinian musician crossing borders and checkpoints to eventually reach the United States, he is upbeat about his life and has appeared at the White House and the United Nations in New York to perform his music and tell his story.

His appearance with Alicia Keys and Israeli musician Idan Raichel at the 2014 Global Citizen Festival in New York’s Central Park performing the song “We Are Here” (watch it on YouTube) is a prime example of him fulfilling this role.

He continues the message when he tours with his own group, the Ali Amr Quintet, and when he gives university lecture-demonstrations.

Young Ali’s service as cultural ambassador began at the age of 12 when he was invited to Norway and Sweden to represent his country, and subsequently to play at the Royal Palace in Jordan.

And as an adult he has continued in the role of world citizen, performing at the invitation of Quincy Jones with the Global All-Stars at Festival de Peralada in Spain, and with the Ali All-Stars Tour with Grammy Award producer Javier Limon, appearing in Spain, Turkey and the Netherlands.

His tours have taken him to Boston Symphony Hall, Carnegie Hall, the Kennedy Center, the Hollywood Bowl, Auditorio Nacional in Madrid, Koerner Hall in Toronto, the Alamodome in San Antonio, and numerous festivals, including the Newport Jazz Festival, the Monterey Jazz Festival, and the Middle East Music Festival.

And he has contributed to a number of albums and films, including the recent movie, Noah. Also he has appeared with a host of performers, including vocalist Bobby McFerrin, pianist Lang Lang, and flamenco guitarist Paco de Lucia.

The young musician is grateful in particular for the support and encouragement of established performing artists Quincy Jones, Alicia Keyes, and Javier Limon, all of whom invited him to perform with them.

“I didn’t think I’d be where I am today,” he said. “I didn’t expect I’d be listened to and taken on tour. My musical journey is full of surprises.” And when he thinks of his future, he smiles. “I’m open for surprises!”

For a sample of Paris’ musical talent, visit facebook.com/AliParisMusic.

As a stop on his Midwest tour, Ali Paris will present a solo performance singing and playing the qunan at Bay View Lutheran Church at 340 West Maple in Sturgeon Bay on Monday, Feb. 8 at 6:30 pm. A freewill donation will be accepted. Call 920.743.4705 for more information.