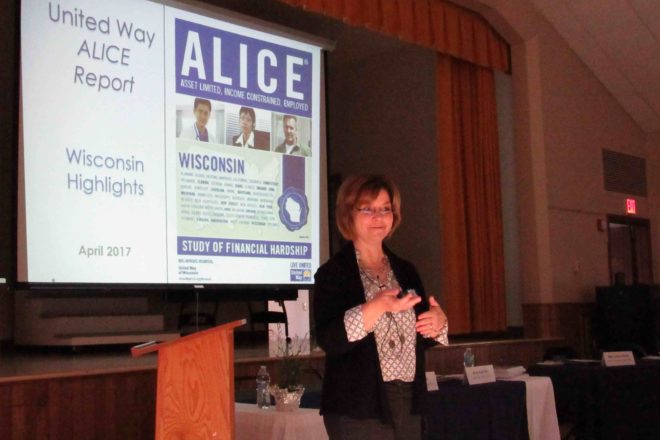 What percentage of employed Door County full-time residents do you think are either impoverished or one emergency away from going broke?

Would you guess one-third?

Even people who suddenly reach out for public or nonprofit support for the first time might not guess 12 percent of Door County households earn less than the federal poverty line and 21 percent of households are living paycheck to paycheck. Or, in the case of many service workers and small-business operators here, making plenty during tourism season and running out of savings in winter or by spring.

Mary Ellen Smith from the Door County Health Department said just last week she received a call from a hard-working mother who was pregnant and suddenly, for the first time in her life, needed help. In this case, she learned she could use the Women, Infants and Children assistance (WIC) to help her afford the costs of good nutrition for her children and family.

“I was really surprised that there is help available to me. I thought everybody here is rich,” the mother told Smith.

A panel assembled Saturday, April 22 at the Baileys Harbor Town Hall to better understand the causes of financial vulnerability among Door County workers and to kick-start conversations to find solutions.

No one among the crowd of 40 identified himself or herself as living paycheck to paycheck.

But Charlene Mouille, executive director of United Way of Wisconsin, shared loads of data, and representatives from county agencies shared stories to “put a face on” the Door County people who come up short, despite working, raising families and trying to better themselves.

Mouille and the panel are calling each of these people ALICE — Asset Limited, Income Constrained, Employed. Wisconsin just became the 15th state where United Way launched a statewide networking and collaboration initiative to find solutions for and to better understand ALICE.

Morris County, New Jersey launched the effort after United Way and Rutgers University officials noticed a disconnect: When they talked to people about fellow residents of their affluent county working full time or more and not making ends meet — whether from having transportation problems, an unexpected health crisis or a child care difficulty — they’d respond, “That’s not us. We’re not the city center.”

“These are hard-working individuals that we know,” Mouille said. “This could have been a sister or an aunt or an uncle. It could be a child-care worker…It could be the person fixing your car.”

The goal now, said Mouille, “is to figure out how to frame their story so their community could understand where the need is.”

Twenty-one percent of people here barely make it for varied reasons: Many work several part-time jobs, lack paid-time-off if a child gets sick, and in winter and early spring can’t find work or have to commute 60 miles. Some make too much to receive free health care but the cost of mandatory health insurance or the penalty for not having insurance can add that one extra bill that breaks the budget.

Mouille said her sister-in-law’s son was diagnosed with cancer and all of a sudden she was in financial difficulties she’d never had before.

“One blip of something they didn’t expect to happen, and all of a sudden they’re finding it hard to get by,” Mouille said.

Caleb Frostman, executive director of the Door County Economic Development Corp. (DCEDC), is warm to the thought of charity for others, but he said there needs to be an understanding that most people who find themselves in financial need didn’t get into that situation on purpose.

He also warns people not to misuse catchphrases for assistance, such as “entitlements” and “handouts.”

Before coming to Door County from Minnesota in the past year, he spent many years as a Big Brother to a child whose mother worked a 40-hour-a-week job, plus four hours on weekends at Wells Fargo. So just because she qualified for assistance, he doesn’t think anyone should resent a hardworking mother like her. He said he seeks positive ways to combat stigma.

As for the DCEDC, the No. 1 need is for a “net in-migration” of newcomers to Door County. “We’re losing people,” he said, noting there’s an effort to start marketing to bring in vacation homeowners and second-homeowners to become employed here, to live and to start businesses.

Affordable housing is a close second in terms of needs. He said he’s pleased that up to 100 affordable units are under development in Sturgeon Bay, and he’s glad that unemployment has been going down. For example, February unemployment was 7.2 percent, compared to 3.2 percent nationwide, and, reflecting the seasonal nature of jobs, July 2016 unemployment stood at 3.5 percent, down from 4.7 the year before and 6.2 percent in 2014.

Carol Wautlet, of Door County Human Services, spent most of her career in poverty-stricken areas, but sees plenty of people with hardships. For example, if a person works at an $8.50-an-hour job full time, they’ll exceed the dollar amount assigned to give them free health care: $1,005 a month, gross. So, the low-income worker either has to buy insurance or pay a penalty, when they cannot afford any extra bills.

She said people working in service jobs work extra jobs and hours during the high season, but “you can’t really make enough to make it through” winter in a six-month economy. And, when people qualify for the highest levels of unemployment, $1,400 a month, they then can’t qualify for other assistance.

The lack of affordable housing creates fierce competition for apartments.

Sandi Soik, from Lakeshore Community Action Program, said a family friend was about to rent a house for a little more than $700, and another person offered $1,000 and “they lost the house.”

Several people talked about childcare hardships, noting child care for families who can barely afford it stacks up to $800 a month at accredited day care facilities (and there are only three now in Door County, said Amy Kohnle, Door County United Way executive director).

Event organizer Susan Kohout thanked the panel and audience for its efforts in the conversation, though she said her head was spinning from all the information.

The ALICE report can be found on the Door County League of Women Voters’ website and Facebook, said league event organizer Susan Kohout. She said it’s data-heavy, as thick as a phone book, but worth studying. The league brought in Charlene Mouille, executive director of United Way of Wisconsin, to speak Saturday for the first of a to-become-annual Eileen Bohn Speaker Series, funded by a grant from the family of the late Eileen Bohn, a matriarch of the nonpartisan Door County League of Women Voters.