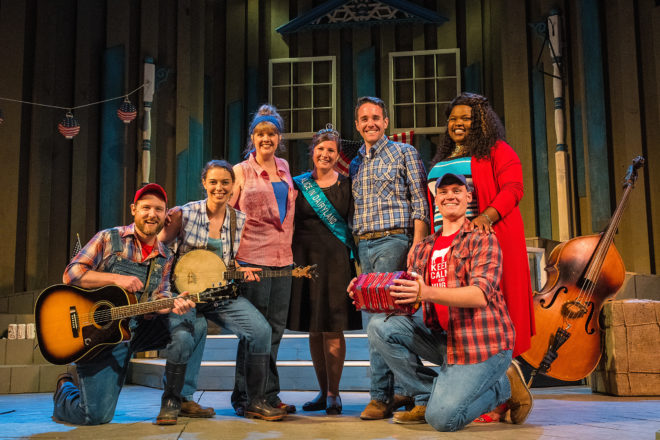 Alice in Dairyland Kaitlyn Riley, pictured center with the crown and sash, poses with the cast of Northern Sky Theater’s Dairy Heirs. Photo by Len Villano.

Kaitlyn Riley, Wisconsin’s 71st Alice in Dairyland, visited Door County for the first time on June 19. During her year-long, full-time professional position as an agriculture ambassador, she expects to travel more than 30,000 miles and attend hundreds of events to facilitate a deeper understanding of the many facets of the state’s agricultural industries. (Our state not only makes a quarter of the nation’s cheese, but is also number one in the production of snap beans and cranberries. FYI: They were originally called crane berries because the shape of the blossoms resembles sandhill cranes.)

But no matter how many miles Riley travels, her visit to Door County included something she’ll not experience anywhere else – the world premiere of a musical comedy about a Wisconsin dairy farm with Lola, a talking cow (whose words are understood by only one human).

Riley arrived early for the 8 pm performance of Dairy Heirs at Northern Sky Theater’s stage in Peninsula State Park. She greeted theatergoers by the fire ring for nearly an hour, gave a short talk before the show, then joined the audience for a rollicking visit to a dairy farm in turmoil, populated by Eva Nimmer, Chase Stoeger and Alex Campea (a pair of most unlikely identical twins), Molly Rhode, Doug Clemons, Lachrisa Grandberry and, of course, Lola the talking Holstein. The play was written by Joel Kopischke and Eva Nimmer, with music by Alissa Rhode.

The farm scene is very familiar to Riley, who grew up on her family’s registered Jersey dairy farm near Gays Mills, Wis. After graduating with honors in 2014 from University of Wisconsin-Madison, where she founded the university’s first agricultural radio talk show, she was chosen as Wisconsin’s Fairest of the Fairs, reigning at 54 of them around the state. She worked as the farm news director at WPRE-WQPC in Prairie du Chien and as a multimedia journalist with WQOW in Eau Claire. A year ago, she returned to the family farm to manage calf and heifer care, while writing for Hoard’s Dairyman. So, the setting of Dairy Heirs was very familiar to her.

After the show, Riley said, “It was phenomenal! I got chills because it really reflects the passions of a Wisconsin dairy farm and reminded me so much of my own experiences. I like the fact that it included the changing technology – working with a nutritionist to provide the best feed for the herd. And it shows the effort it takes to keep a family farm alive. I don’t think Northern Sky could have picked a better musical to stage in Door County.”

Dairy Heirs plays on Mondays at 6 pm, Tuesdays at 8 pm, Thursdays at 8:30 pm and Saturdays at 8 pm. For more information visit northernskytheater.com.