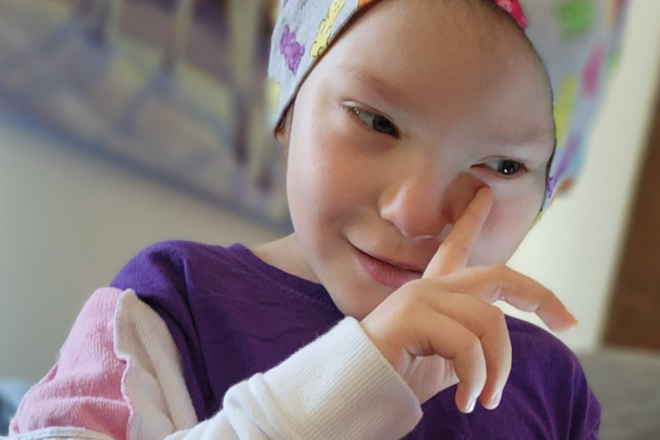 That’s one of the few saving graces in the ordeal that the 9-year-old Jacksonport resident and her family have endured since she was diagnosed with acute lymphocytic leukemia in 2021.

“The hospital is like an adventure for her,” said her father, Jacob Mattson. It has also been a big part of her social life, explained her aunt, Marybeth Mattson.

Alice, who has autism and struggles to communicate verbally, isn’t comfortable in many places outside of her father’s home in Jacksonport or at the home of her mother, Loni Kolski, in Sturgeon Bay.

On Thanksgiving Day, though, Jacob hopes to take Alice to the Jacksonport Thanksgiving Day Parade, where organizers have named her as the beneficiary of their annual Neighbors Helping Neighbors theme. They will collect bucket donations along the parade route to help the family cover living expenses as Alice continues her treatments.

“That little girl has got a lot going on in her life,” said parade committee member Jeri Taylor. “What they’re going through physically and financially is just incredible, so we want to do whatever little bit we can to help. Door County is a pretty good misfit island – connected by bridges – where we take care of each other.”

Those who won’t be at the two-block parade can also support Alice through her GoFundMe page at gofundme.com/f/help-alice-mattson-fight-leukemia.

“We wouldn’t survive without all the help,” Jacob said. “It means a great deal. And to see the community come together to help you, it’s a really beautiful thing. You forget sometimes that people are good.”

Although insurance is covering direct medical expenses, the family has faced numerous financial hurdles beyond hospital visits and chemotherapy.

Jacob’s job at The Mill Supper Club is waiting for him when he’s able to return, but he hasn’t been able to work since Alice’s diagnosis. Caring for her is a full-time job. Because of her autism, she’s not often comfortable going to other people’s homes or having other people come into her home.

“It’s a challenge because it means we’re just kind of alone together all the time,” Jacob said.

In 2020, Alice was getting sick often and indicated pain in her throat. Doctors thought she had asthma.

“But I have asthma,” Jacob said, “and I knew that wasn’t correct. She couldn’t swallow.”

He pushed for X-rays, which revealed a mass in Alice’s chest that was pushing against her throat. Doctors asked Jacob and Loni to come in to talk.

“Anytime the hospital calls and tells you they want to meet with both parents at the same time, you know it’s not for a good thing,” Jacob recalled. “But for some reason, I kind of feel like I knew. We also don’t seem to have a lot of luck, so maybe that’s why.”

Jacob and Alice were soon on their way to Children’s Hospital in Milwaukee.

“That was a really tough drive,” Jacob said. “Then it was days of forcing large amounts of liquid down her throat. It was like waterboarding a puppy.”

Acute lymphocytic leukemia is a cancer of the blood and bone marrow, and it’s the most common type of cancer in children. Fortunately, it also carries a very good prognosis, with a 90% survival rate.

After a year and a half of chemotherapy, Alice has hopefully passed the halfway point of her treatments, with another year to 18 months to go. She was bed-ridden for months, dropping to 38 pounds. A port was installed in her chest to administer chemotherapy, and she visited the hospital more than 100 times in the ensuing year. But she’s regaining strength now and is back up to 54 pounds.

“Some days she’ll sleep all night; some days it’s three hours. Other days she’s up 30 hours straight,” Jacob said. “If she’s up, I have to be up with her.”

Alice’s verbal limitations make it a struggle to understand her wants and needs, and during her treatments, she hasn’t been able to get the behavioral therapy she needs.

He cooks multiple meals to get one she’ll eat, and he can’t rely on the “eat this or else” ultimatums that other parents might use.

“She’ll ask for 10 things, but not want any of them,” Jacob said with a laugh rather than frustration.

But in the struggle, Alice and her family find light in her artwork. She loves to draw, and Marybeth said those drawings “provide a window into her soul, into her emotional state. That’s why when we look at her drawings, we think it’s kind of what she’s thinking.

“She draws some profound and interesting things,” Jacob said. “She’ll draw a skeleton and muscle tissue and then clothes over that, but you have to watch her whole process to see those layers.”

Alice often draws anime-inspired characters, and she loves drawing dinosaurs. The family has printed hooded sweatshirts with her drawings of dinosaur skeletons on them to sell at the parade.

She has taken small steps toward a return to school, attending Sevastopol two days each week for an hour and a half each day. A year from now, the family hopes her cancer battle will be over, and their focus can move back to her life as a kid and as an artist, wherever that takes her.

“I’m incredibly proud of her,” Jacob said. “She’s a trooper. She fights through.”