Jeff Bakke and his golden retriever Morgan the Wonder Dog walk the grounds of the Sister Bay dog park 350 days a year. It wasn’t long before this self ordained Grand Pooh-bah of the park kept seeing the same faces.

“It started out with just a few of us over there in that shelter,” said Bakke, pointing to a small wooden bench that looked like a bus stop. Admitting that names are hard to remember in older age, Bakke collected the names of the frequent visitors and their dogs. 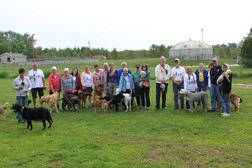 “I made a little spreadsheet so you can look at the dog and see who the owner is and remember their name,” Bakke laughed. “After we had about six or seven people we decided to exchange emails and that was five years ago and one of the guys had a cocktail party for us and there were probably about 10 couples and it just grew from there.”

Five years later, a group of 117 active members participate in cocktail parties, dinners and outdoor events together. The group produces merchandise, newsletters and a community for like-minded residents and visitors.

“For people that aren’t established, if you’re not local, you come in here and it’s a great social deal,” said Bakke. “The rest of us are all transplants,” Bakke pointed to several owners playing with their dogs while explaining where they spend their winter and other facts only uncovered from hours of company.

“I can pretty much tell you what every one of these people has done in their lives. These are all people that have met everybody at the park,” said Bakke.

After the group was established, Bakke began coordinating with the village to communicate the needs of the dog park.

“They really do take good care of us,” said Bakke, whose only wish is for another drive by with the village lawn mower. 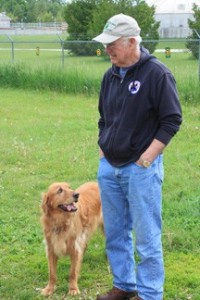 One of the bigger improvements to the park last year included alleviating a problem with standing water through the middle of the fenced park. Bakke went to the Sister Bay Parks committee and soon they had a drain tile and gravel laid down. “They’ve been super cooperative. Practically anything we want, they’ll get it for us.”

The group gets together for potlucks, dog swims in the bay and cross-country walks through the winter at Ellison Bluff Park, The Clearing and private acreage of some group members. Besides providing a place for dogs and their owners to be social, the group also helps each other with dog-related concerns.

Perhaps most importantly, owners and visitors never have to worry about where they are stepping while walking around the dog park.

“Everybody picks up. If there’s a stranger in here then we’ll keep an eye on them and make sure that somebody picks up so you can walk around here and be pretty sure you’re not going to step in anything,” said Bakke.

Anyone interested in joining the group can show up at the dog park between 8 and 9 am any day of the week. At the end of June, the group will begin dog swims at Pebble Beach on Wednesdays at 12 pm. They will host two more potlucks this year on Aug. 5 at the Sister Bay Village pavilion at Waterfront Park and Oct. 7 at the Corner of the Past of the Sister Bay Historical Society.