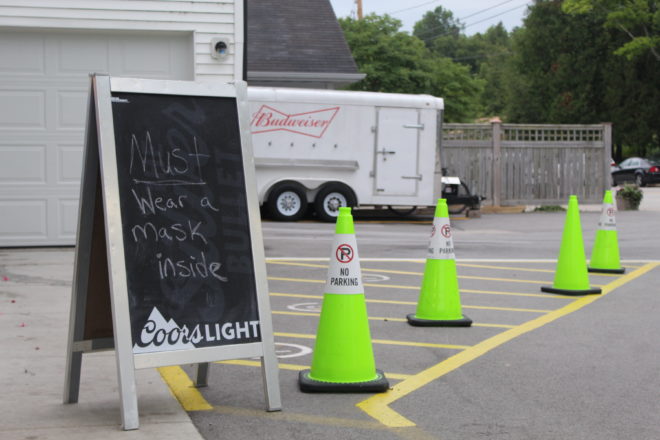 On Monday afternoon, while parked outside the entrance to the Walmart in Sturgeon Bay, not a single maskless person could be seen entering the store, at least during a period of about 40 minutes.

A large sandwich board positioned at the roped-off entrance gave customers the scoop: “Walmart requires face coverings for all customers, associates and others while visiting our stores.” Had someone tried to slip by without a face covering, that individual would have had a conversation with two people who stood guard at the entrance.

Walmart is one among a slew of large retailers such as Target, Walgreens, Starbucks, Best Buy, CVS and Kohls that have adopted mask mandates beginning this week or next. The new mandates come as COVID-19 cases continue to increase and public-health guidelines continue to stand behind the efficacy of masks in stemming the spread of the contagious virus.

The latest jump in Door County cases – the number was 72 positive tests as of Tuesday – also persuaded Adam Goettelman, the owner/operator of Healthy Way Market in Sturgeon Bay, to begin enforcing a mandatory mask policy as of Monday. As the proprietor of a health-food store, Goettelman said the overwhelming majority of his customers already wore masks voluntarily as an act of kindness.

A small group of others, however, believed their healthful lifestyles had strengthened their immune systems and made them unsusceptible to the virus – or at least it’s more serious consequences. From these people, he’s heard complaints about the mandatory mask policy and has been told flat out that they would no longer shop at his store. Such statements have saddened Goettelman, but they haven’t deterred him.

“I have been a supporter and believer of living a healthy lifestyle mentally and physically and environmentally for a very long time,” he said. “But at this one point, and as much as I can put one foot in that boat very strongly and agree with that [healthy immunity belief], it’s bigger than me and bigger than my store, and I’ve got a staff of some 20 [people] that I have to worry about, and I love my community.”

Goettelman said neither he nor anyone else has anything to lose by putting on a face covering.

“Why not mask up for 90 days,” he said, “and if the numbers don’t drop, we’ll reevaluate. But if the numbers all plummet like the scientists tell us they’re going to, let’s everybody just put your best foot forward for your neighbor right now. Stop looking out for yourself.”

Michael Lane, the local Walmart store manager, wasn’t authorized to comment to the media, but the employees outside said they hadn’t had a single incident since the mandate went into effect Monday morning.

Other businesses up and down the Door County peninsula that have required masks ever since they reopened for business echo that experience.

“Overall, 99.9 percent of our customers have been great about putting on a mask for the time they are in the store,” said Alicia Kersebet, co-owner of Ecology Sports in Sister Bay. “I have staff that have a compromised immune system, and I feel thankful that for the most part the requirement of a mask has not been an issue.”

“We’ve had very few people, 5 percent or less, that we have to ask to put a mask on,” she said. “Most of the time they actually have one but forgot to put it on. Nobody has really given us any trouble with that at all. It’s been very positive.”

At On Deck Clothing Company in Sturgeon Bay, maybe 1 percent of customers resist the mask requirement or give dirty looks.

“Most people aren’t flat-out rude,” said On Deck’s Judy Thompson, a full-time employee at the 3rd Avenue store. But once inside the store, some customers allow their masks to slip, and not all employees, Thompson said, are comfortable reminding those customers to pull their masks up.

“It’s hard when you’re busy waiting on someone and the only one working,” she said.

Though dirty looks and avoidance are the worst reactions many of the business owners and employees have had, others haven’t been so fortunate. Lena MacDonald, a host at Northern Grill and Pub in Sister Bay and the daughter of owners Ron and Lisa, said her experience enforcing Northern Grill’s mask requirement has been severe.

“The pushback was a lot more than I thought,” she said, “and as the hostess, I get the brunt of it. I’ve had a handful of conversations that have just gotten volatile.”

Kari Baumann, manager of the Baileys 57 BP gas station in Baileys Harbor, said she has had many confrontations with customers who refused to wear masks when the business first began requiring them indoors. This included customers who have yelled, cursed and spit at her employees.

“It was horrible,” Baumann said. “People were yelling at us constantly, and my life was threatened a few times.”

Cornucopia’s Herlache said she believed her staff has had so little pushback on masks because many businesses on 3rd Avenue require masks, and people know what to expect. Still, she would not favor a mask mandate, preferring that individual businesses make the decisions themselves.

“I would not want someone to tell me I couldn’t require a mask, so I wouldn’t want another telling me I have to,” she said.

On the other hand, the Northern Grill’s MacDonald said she wished the Village of Sister Bay required masks.

“It would’ve been so nice if the town could have taken some of that off of us and helped us operate safely,” she said.

Others said they would like that kind of uniformity and guidance across the entire peninsula.

“I wish they would have mandated face masks for Door County because it’s so random [currently],” On Deck’s Thompson said. “You see people walking around without the face mask, and then they come here, and there’s no rhyme or reason why one store is requiring face masks and somebody else isn’t. It’s confusing to our visitors.”