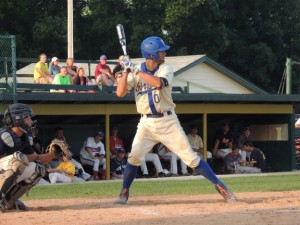 Nicholas Kita, a recent Gibraltar graduate, was in his element playing baseball on the big stage during the 31st annual Wisconsin Baseball Coaches Association All-Star Classic at E.J. Schneider Field in Oshkosh on June 27 and 28.

Kita shined as a four-year starter as a catcher and infielder for the WIAA Division 3 Vikings.

At the All-Star Classic, Kita finished with five hits in six at-bats, including a double, off the best pitchers in Wisconsin. He also scored four runs, had two stolen bases and was walked while playing three games for the North in the round-robin tournament featuring the state’s elite seniors. He played catcher for eight innings, designated hitter for four innings, and first base for one inning. 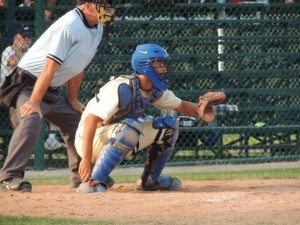 “It’s a lot different than high school,” said Kita. “The pitching’s a lot better. It’s fun to be around guys who love baseball as much as I do.”

Coach Jay Kita was selected as one of the North coaches. He got to coach 18 young men who had great high school careers and loved to play baseball.

“It was great to be able to coach Nick one last time before he finishes up his Legion career and heads to Ripon,” Coach Kita said. “I was also glad to have my 7-year-old son, Braden, as bat boy for the games. All the players welcomed him and had fun with him, too!” 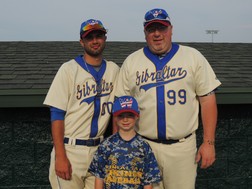 Nick will attend Ripon College this fall to become a secondary education teacher and play baseball for the Red Hawks. He earned a $100 scholarship from the WBCA after he raised more than $700 for the All-Star event.