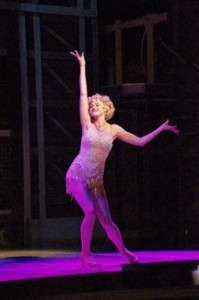 In just its first three plays, the Peninsula Players has moved from drama (Opus) to comedy (The Nerd) and on July 25, a musical (Chicago).

“It’s a lot of fun,” says Sean Fortunato, who is transforming himself from a socially clueless nerd to a slick and manipulative lawyer in Chicago. “A great thing about being up here is they want people for multiple shows, and they do a variety of productions.”

Greg Vinkler, the company’s artistic director and director of Chicago, says it can be a challenge finding actors who can do a wide range of work, but the resident summer theater company, which maintains most of the staff for the whole season, requires adaptive cast members.

For Fortunato, the change in stage personality is “fun. Especially after playing someone with no social skills and no tact and then playing someone who knows when to turn on the charm, but always for his own motives.”

Vinkler also enjoys watching, and directing, the transition. “It is great to see people in The Nerd and then see them in the musical. Sean goes from a nerd to a slick, slimy criminal lawyer who sings in Chicago, and Karen Janes Woditsch goes from a meek schoolteacher in Nerd to become go-to-hell Kitty in Chicago. Going from drama to comedy to musical keeps it interesting. Each has its own separate world of needs; the musical is the neediest.”

Sitting in the Players’ garden by the bay after lunch, Vinkler and Margaret James, the music director, talked almost simultaneously about the similarities and differences between plays and musicals and the demands they make on a company.

On a musical versus a play: 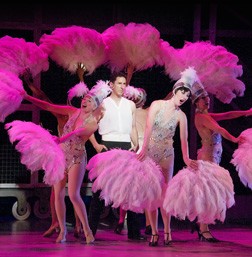 MJ: And a bunch more people,

Vinkler, who chooses what the Players will present during the course of a season, said that Chicago has both more substance and subtlety than many musicals. James likes the way he is emphasizing the story, which she said will make this production better than the movie.

GV: In musicals the play part – the book – is much more condensed. In Chicago the book scenes are pretty good. In Showboat the book is creaky beyond belief, thin. Here the dialogue is fun and snappy. With Nerd, we started by blocking out the scenes; in Chicago we started learning the music; there was nothing but the music for the first two and a half days and then we added the choreography.

GV: Chicago has underscoring – music playing while the play is going on.

MJ: The audience may not consciously realize it, but the music helps to structure the scene. 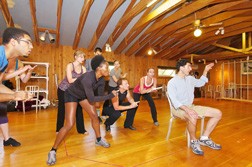 GV: In some spoken parts, the actors have to do within the timing of the music.

MJ: In act one, the orchestra almost never stops playing. The rehearsals are done with me playing the piano and then they bring in five musicians – trumpet, trombone, reed, percussion and bass. Then they will rehearse with the actors for about 12 hours before opening night. I play the piano with them, which helps provide structure.

MJ: We are more focused on storytelling in our production.

GV: It’s a great story. It’s based on a play from the 1920s, which was written by a woman reporter, and the play reads a lot like the musical, a crime drama with female murderesses and then adding vaudeville-like musical numbers to elevate parts of the story. It is very well done.

Perhaps it’s a bit counter-intuitive, but musicians in musicals have a subordinate role. To avoid having music overpower the actors’ voices, the Players use microphones.

GV: We don’t normally mike plays but we do for musicals, in part to balance the actors’ voices with the orchestra. Usually the drummer we have to mute the most.

MJ: The musicians who play the theater are much more self-effacing because they are supporting the effort going on onstage. There is no soloing in the theater – you are there to support the theater.

GV: Musicals have no place for any improvising.

MJ: There are certainly times when I have to make up something to play, but that’s only when a disaster happens. 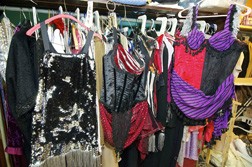 GV: We advertise it as mature content and mature language. But we did the same with Opus, and there were still people who complained about the content.

James, who has worked in Chicago-area musical productions for years, is in her fourth season at the Players, and loves it. She and Vinkler think the company’s spirit, and the setting, contribute to its success in staging five shows over a summer.

MJ: This is like heaven. Every actor from Chicago wants to be here. We eat all of our meals out of doors in this beautiful forest and someone else cooks for us. The company is full of kindness – support which is really fostered by Greg. The atmosphere allows everyone to put in their bit of magic and the sum of that is enormous.

GV: We do five shows in a season, which is what a lot of theaters do in a year. Milwaukee Rep and Goodman do one show at a time with a company and producers and designers and then change over completely. We do the same number but use the same company to do most of them. It is a lot of work but you’re in a place that is relaxing.

MJ: Our actors are so good.

Peninsula Players performs Tuesdays – Saturdays at 8 pm and Sundays at 7:30 pm, except for a 4 pm matinee Aug. 12.

Individual ticket prices to Chicago range from $36 to $42; discount tickets are available for groups of 15 or more.